What are you struggling with?

The cover I am working on has a couple of runs that are two notes per string, then move down, etc. played really fast. I just can’t seem to get it–I get hung up in the transition/string cross. I am ok slowing it down to .75 speed, but as soon as I bring it up to 100% I get flub flubs

I had a run like that in a Sublime song, that I couldn’t quite ever get right when playing along with the song. I played it slow, at speed and faster over and over thousands of times, sometimes for like 3-5 minutes at a time.

Now, I can play that part without hardly any thought at all.
Same goes for the main slap riff of Take the Power Back by Rage Against the Machine. I have just played it over and over so many times that I play it without thinking. I only need to think every 4 bars when there is a different ending, but I played it thousands of times for 3-5 minutes a time many times a day, many days a month.

You can do it, and going slow and speeding up, ramping up, playing it faster, all that is great, but you still need to play it enough that it becomes engrained in your brain and muscle memory so you could almost play it while singing or talking to somebody or reading something on a computer screen.

I do that for a lot of songs that I learn, especially when it is a song I really like. sometimes the only thing I do on a bass in a day is play a section of a song I like and want to be able to cover.
I can jam parts of Black Sabbath Iron Man all day long and not get bored.
Not the main, immediatly recognizable riff, but the jamming parts of the song, it kicks ass, and it has sort of a bass solo during the sections, so I have a lot of fun with that. I still can’t play that one without thinking about it, I have a few thousand more times to go to get it fully memorized.

Thank you for the link, @Barney !

I had to Google Zoom B1.

I had to Google Zoom B1.

@NipperDog I’m a bit of a convert to this thing. For just $99 you get a multi effect processor with 60 different effects, multiple amp sims, built in tuner, built in drum machine with many types of patterns and all easy to change the tempo with the turn of a physical dial. It’s ridiculously cheap and good for $99. I’m a bit of a convert to this thing

This was probably the best effects pedal / unit purchase I have ever made.
Granted I still have one, and don’t use it often, mostly for a quick tuner when practicing bass to amp, without my pedalboard, I throw this in between for a tuner.
But the amount you can learn about effects, and creating effects chains and about how each effect works, is immeasurable, especially for such a small price tag.
Used you should easily get for $75 or less.
I got mine about a year and half ago or maybe a little longer and it was only $80 new on Amazon, $109 if you wanted the B1x-Four, with the built in expression pedal.

This was probably the best effects pedal / unit purchase I have ever made.

I am in no way a pedal fan but took the plunge on this one based on the comments within the forum and did not regret it.

I second the Zoom B1 - useful in a ton of different ways - and flexible enough, with enough customization possible that it’s keeping G.A.S. at bay (on the pedal front).

I think both hands are tense trying to “fix” things.

Hi all! Just had my wrist surgery done a few hours ago! Everything went really well. I have a hard cast that I’ll be in for a week, and then it’s just a matter of working out the stiffness so I can get back to bass playing. Gonna be a struggle, but I’ll get through it in the end! 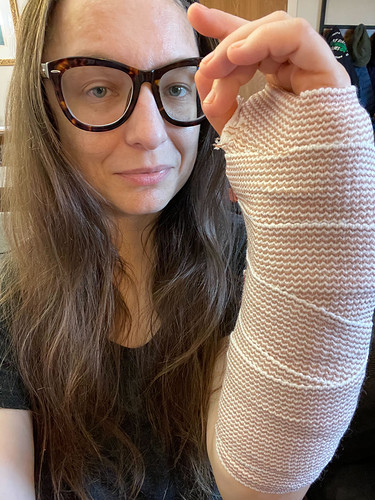 Ouch @bofhgirl ,
Hope your back on your bass real soon,
Cheers Brian

Okay, you started it. Now, we’re going to need follow up pictures.

I hope everything heals well.

Hi Josh! I am definitely a newbie to any musical instruments and thought of picking up a bass guitar as I like the sound of low frequencies. Anyway, I did a lot of research around to choose the right online bass tutorials and I was very happy to have purchased your class.

I work two jobs as Data Analyst and I know finding the time to practice is a real challenge. However, sometimes, I have some free time at work I find the time to reach out to my guitar and play a few videos. I always keep my bass guitar in sight (just beside my work table) so I can sneak in some time to play a little.

The objective here is really finding the time to practice even for a few minutes each day and sustain that habit. Small swipes of a butter knife can one day knock down an oak tree

However, sometimes, I have some free time at work I find the time to reach out to my guitar and play a few videos. I always keep my bass guitar in sight (just beside my work table) so I can sneak in some time to play a little.

That’s exactly what I do too. Other people take smoke breaks, I take bass breaks. 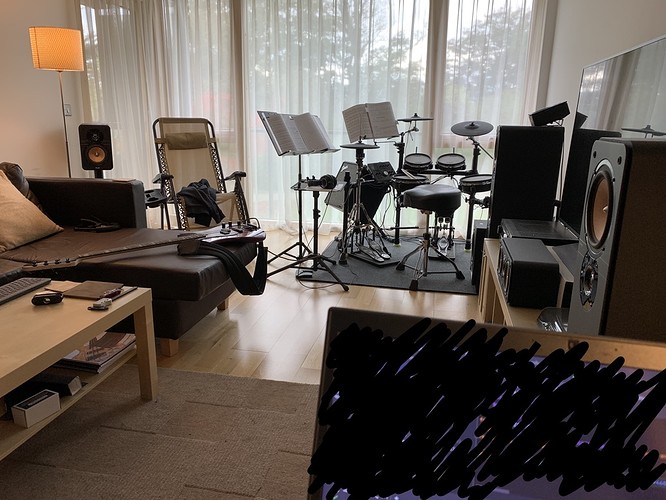 Oh oh watch out.
That Bass should be in a stand

Oh oh watch out.
That Bass should be in a stand 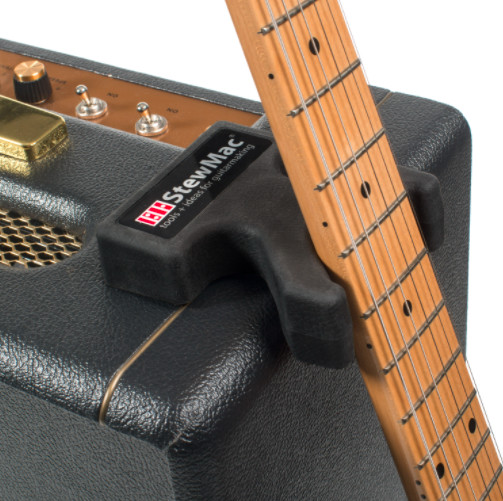 Don’t worry, it normally lives in a triple stand (not pictured) with its two siblings.

But now that you mention it I do have a spare single stand that I could use there for a plugged in bass.

I really need to pack up the drum kit, it takes up a lot of space and I haven’t played it in months…