@juli0r and @cajarmj61 just scratched an itch I’ve had for a long time in the Hard to Find Sheet Music thread, so rather than highjacking that thread, I’d like to ask in a new thread. @JoshFossgreen maybe you would know…

You can get piano arrangements for just about anything from a fake book or whatever. But, what I’d really like to know is if you had the sheet music for piano-- how could you derive the chords from that? Say you have a bar with 4 beats and bunch of stacked notes forming chords, arpeggios, etc. How would one go about assigning a chord to cover that bar? What I am looking for is “One Chord to Rule Them All.” In other words for each beat in the bar you might be able to construct a chord, but if you wanted to play a chord over the entire bar. How would you determine that? I’m guessing having the key signature for the piece would be helpful, but how would one approach this?

Understanding what chord works for a bar can be a bit tricky, as chord players (depending on the music) tend to do do all sorts of cool movement and harmony-substitutions.

What you’ll end up with is a combination of pure note analysis and listening.

For the note analysis, you have to build triads and seventh chords with the notes in the chord voicings (the stacked up clumps of notes that the piano player is playing).
If you have a combination of Cs, Es and Gs, you’re dealing with a C major chord, no matter how the notes are stacked, or broken up into arpeggios.
It is VERY important what note is lowest in register, as that bass note dictates the way you would explain or write out the chord notation.

For dense bars where there is a lot going on in the voicing, or (as happens sometimes with them piano playin folks) you have different chords on every beat or half beat, you can generalize one chord over larger sections if it works in your listening analysis, and you try it out and it works.

This is a real cool question, and I hope I got at at least part of it.
Feel free to holler with examples or specifics to get in deeper!

Good question! This gets into a bunch of classical theory for analyzing music, which would be hard to summarize in forum post format.

Like Gio said, the main element is just looking at a given “chunk”, maybe a bar, or two beats, and see what notes you have in your inventory, and then analyze them.

It gets tricky if you don’t have enough tools in your bag though, like here’s bar 1 of Bach Cello Suite 1 Prelude -

But those A’s aren’t really chord tones, they’re passing tones that resolve directly to a chord tone (B), so your ear doesn’t hear this bar as an (add2) or (add9) chord, it’s just a G major triad vibe with a passing note.

That’s a pretty mild example - if you’re dealing with chromatic neighbor tones, etc. etc., things can get hairy. Here’s a quickie lesson about this from MusicTheory.net .

But yes, feel free to post something you’re trying to analyze here and we can talk shop!

Hey thanks for taking a shot at my question @Gio Everytime I ask a question you seem to know exactly what I am looking for.

This is a real cool question, and I hope I got at at least part of it.
Feel free to holler with examples or specifics to get in deeper!

I thought it was an interesting question too; I just wasn’t too sure if anyone would get it, but I’ve been after this for years. I think I’m following in your explanation; I’ll be interested in what more you’ve got to say on this. Here’s a pretty simple example with no more than 4 notes stacked. It’s a four part harmony that can be sung by four voices or a piano. Is it really possible to find “One Chord to Rule Them All” (all of them being the notes in a bar)? 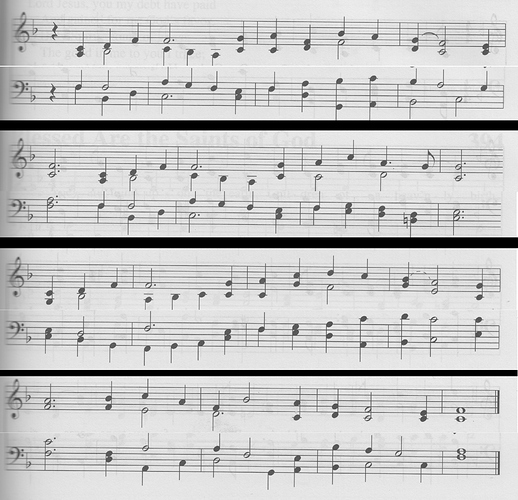 But those A’s aren’t really chord tones, they’re passing tones that resolve directly to a chord tone (B), so your ear doesn’t hear this bar as an (add2) or (add9) chord, it’s just a G major triad vibe with a passing note.

Hello @JoshFossgreen Thanks for looking at this!

Oh, this going to be FUN! I really dig this stuff. So much to learn. Thanks for the link. I’ve heard of passing tones, but I confess it’s beyond me at this point. I can only guess that it’s a tension note of some kind, like grace notes are. I’ve still got a lot to learn, but this stuff really motivates me.

I know what you mean, as I try to do this quite a lot when I’m noodling around. I’m still fairly rusty at the passing note theory side (as in the added 2nd or 9th), but if I combine my relative knowledge of that with my ears, I can slowly zero in and work out which ones I need to focus on.

So I’ve just looked at that Bach Cello bar that Josh posted, and I get all the notes, but I also need to hear it loads so I can follow it on the music sheet whilst listening, which lets me then work out which ones to focus on.

So for example, that first bar I just youtubed to listen to it (and it was ironically Josh’s video that I first found!) and I can hear G and B being the resolution notes in my head. So I could play G, B, G, B as quarter notes throughout the whole bar. It’s basic and hasn’t got much creativity, but it’s a good starting point.

And then if I listen to bar two on a random guy playing it on youtube on the cello, I think it’s still on the G, but it goes higher than the B (i’ve not looked this up on the music, just doing it by ear at the moment), so I could find that note and then use that instead of the B if that makes sense?

I could be easily wrong with my calculations here, but I just let my ears be the judge.

Blimey, I hope I don’t go deaf later on in life!

That’s a pretty mild example - if you’re dealing with chromatic neighbor tones, etc. etc., things can get hairy. Here’s a quickie lesson about this from MusicTheory.net .

Ah, and here is the full meat of the theory side of it. Looks like I have some reading to do

Interesting topic. Especially since I have gotten more in touch with classical music and I am also reading more music.

Mhhhh I understood the explanation I think but I’m still not sure how I would go about differing between an arpeggiated chord with added notes and just variations that aren’t heard as chord tones. I guess all those need to be resolved…

If the A was longer and doesn’t resolve to B it would be an Gadd2 or add9 chord?

Basically anything that gets resolved back would rather be just the chord with resolved variations in it. Is that at least right in a general sense?

Here’s a pretty simple example with no more than 4 notes stacked. It’s a four part harmony that can be sung by four voices or a piano. Is it really possible to find “One Chord to Rule Them All” (all of them being the notes in a bar)?

OK.
This is lovely standard harmonization technique for 4 voices.
There’s all sorts of fun games to play with this stuff - voice leading rules, doubling rules, ways you can resolve and not - It’s a fundamental part of any Harmony or Music Theory course, and it’s great times.

It all started with Bach, when he took hymns and started finding different chords to put behind the melodies.d He harmonized the 3 non-melodic voices (Bass, Tenor ,Alto) different ways to come up with new music every Sunday for his church.

What happens in this approach is you get a new chord on EVERY BEAT.
This very very rarely happens in any contemporary pop music.

We like one chord per bar.
So - if you want it to sound like pop music, you have to find a simple chord that works for the bar. (In this example, it’s either F, Bb or C - and you could use F for all this)
If you like the classical harmony approach, you have to do it as written, and play each harmony as it comes.

Here’s my harmonic analysis of the first 4 bars below with chord notation.
You can see how complicated it gets harmonically.

Thanks @Gio This is perfect and gives me a lot to chew on. Yep, it’s a hymn (Lutheran), so naturally has Bach underpinnings. So, one Chord to rule them all applies primarily to contemporary music. So, what does this have to do with my bass? I wanted use my guitar (which I am a rank beginner at, but I think I can play some chords) and record something interesting that I can play my bass with. In this particular piece, I just want to play my bass on the bottom note of the bass cleff. I have no idea what it would sound like, but I am just curious. It’s a sort of experimentation that I’m interested in, and it would provide me some site reading exercise for my bass as well. I know it all sounds nuts because nobody is doing it, but I want to try!

I’ve got more to learn about the topic. i.e. the role of the key vs. chord choices, etc.

Thank you very much for taking the time to do this. You’re the very first to take a good crack at it.