What Tuner and Loop pedal to buy in 2022

I have had both a Peterson Strobostomp and a Turbo-Tuner ST-300 running in parallel for the last two months.
I now believe that if I didn’t have a Turbo-Tuner, I’d have thought the Strobostomp to be the best thing available. I also have the Korg Pitch Black and Planet Waves strobo tuner.
For any type of exact pure tone that I could generate with my computer, they were all accurate enough, but the Turbo Tuner is just faster and the display response gives faster feedback. While this might sound trivial, it just makes the process much faster one you have learned that you can be anticipatory with the tuning keys and the speed at which the spin is decreasing is almost exactly proportional on the Turbo Tuner.
There are some nice things about the Strobostomp for sure, but none of them I use.
Once I’ve handed it around to some more of my friends to play with, I’ll sell it, buy another Turbo-Tuner and send it to my favourite custom bass maker because I know he’s as geeky as me.

This isn’t my video and shows the smaller ST-300 option, but it shows exactly what my experiences are. The big plus for the strobo is the huge screen. The turbo looks neat, never heard of it.

I also bought a Peterson Strobostomp with the intention of using it as my main tuner, but I only use it for setting intonation.

I prefer this chepo (but really good) no name tuner recommended by Guitar Max in the vid below: 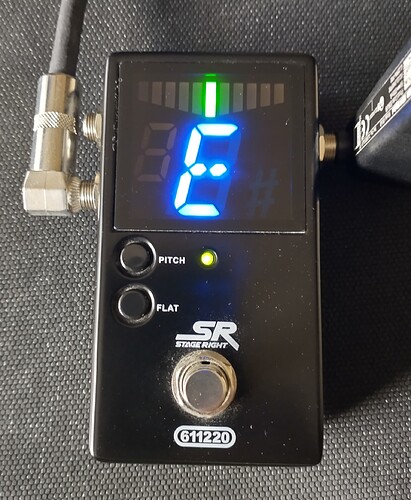 When I was researching the best tuners, it was pretty obvious that stroboscopic would be the most accurate. It didn’t take long to find everything available with a google image search.
Then I found the comparison videos on youtube. The earliest Turbo Tuner one is 15 years old, so they have been around for a while.