What Tuner and Loop pedal to buy in 2022

Hey to you all!

I need to buy a Tuner pedal and a loop pedal for live performance soon.

Thing is i don’t really know anything about pedals, having never used one…

What are the ones that you would recommend me ?

For the Tuner pedal, what i need is one that works well and that is pretty easy to understand. ( i guess that’s mandatory but still

For the loop pedal, i need one where i could have one loop in memory and also be able to loop live, if that’s even possible. As i said i am new to this

Thank you in advance,

Save yourself the tuner journey and get a Peterson Stobostomp HD You’ll end up there eventually and can always get most of the $ back if you need to sell.

You also can simply get the cheap Peterson cable to phone app which works pretty well if you don’t think you need a pedal form. But that’s clunky if you think you will ever play with others.

Thanks John, i only see good feedbacks about this tuner. I will probably get it !
I guess there is only the loop pedal to find now

I have a Peterson StroboStomp. Absolutely the best tuner on the market. Easy to use, easy to see if sitting on the floor. Dead accurate and loaded with sweetened tunings for whatever instrument you might be playing.

I have a Ditto+ looper but haven’t used it enough to say how good it is. Seems to be simple and good but have no reference point.

Other May have better input.
I like it cause it’s super small and does a lot.

For the loop pedal, i need one where i could have one loop in memory and also be able to loop live, if that’s even possible. As i said i am new to this

Hi Alan - don’t know how advanced your bass playing is, or how much you might have left to learn in, say, the B2B course, but if you are in a beginner or even beginner/intermediate stage, I would suggest to wait a bit longer before you get “side-tracked” with a looper pedal.

The entire thing about looping is much more than just the pedal (even though the pedal might limit you in what is possible). There is the whole compositional aspect to looping, and not to talk about the coordination between playing the right notes and hitting the right buttons, all at the right times

Doing all that live is a whole other level!

I own a TC Ditto - probably the “simplest” and least expensive looper pedal out there - I use it almost exclusively to “save” ideas or riffs while practicing (as I don’t have set everything up for recording all the time, and don’t want to fiddle with my iPhone). I have so much else to learn before I will likely use a looper even in a band setting, much less in a live setting.

However, if you really are fascinated by the prospects of looping and this is one of your goals with playing bass and making music, you might want to look into some really powerful gear like the Boss RC-600

I agree on the Peterson. It’s accurate and easy to use. It picks up the low notes with ease, which some of the other tuners struggle with.

I have no experience with loopers, will just add Cici did a video on pedals a few days ago and she likes Ditto, and she is usually pretty good with these things 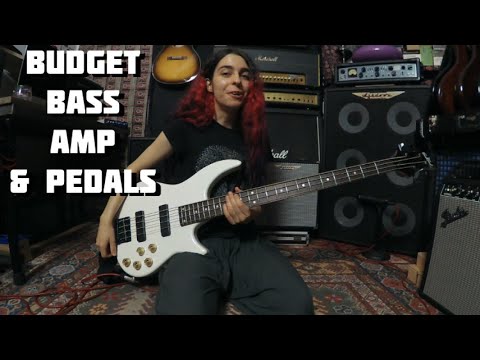 Hi @Alan ! Can you describe more of how you intend to use the looper live.

i’d say im a intermediate bassist, finished the B2B quit some time ago.

I know it takes a lot of practice and technique to use a loop pedal during a live ( the right timing, coordination, etc ). But i want to give it a shot, and even if i can’t do it now, then i’ll have it for later use, or still just use it in practice like you do !

Boss RC-600 looks like a monster, i dont think i need such a big pedal for my use ?

Boss RC-600 looks like a monster, i dont think i need such a big pedal for my use ?

Yes, I was kind of giving you two extremes, as I didn’t know yet what you intended to do. Seeing your reply to @eric.kiser 's question, it seems you’d be all set with the TC Ditto, or the Ditto+ version that @John_E owns, which has a few more bells and whistles.

I bought the Strobostomp HD from recommendations on this forum, and have been extremely happy with it. Someone else from the forum brought up this one up last week that seemed interesting and also integrates a volume pedal:

As for a tuner, Boss TU-3, Korg Pitchblack, Peterson Strobostomp, TC Electronic PolyTune 3, are all fine. You could even go with the Ernie Ball volume pedal that has the tuner display on it. It mostly comes down to what display you like the best and is going to be easiest for you to use on stage.

Peterson owns the standard for tuning. Not literally, but they’ve been doing it so long and the pedal is really nice. If I got one I would keep it at the house for doing intonation instead of taking it on a stage where people will spill beer on it. Unless you were heavily into using the sweetened tunings for your guitar. It just seems like overkill for the stage.

The Boss is simple and built like a brick. This is the one I have and would guess more people have used on stage than any other. When you see the light go green, you know your good. It can also be used to defend yourself if the crowd takes issue with your playing.

The TC Electonic has a good following for its ability to show which string is out of tune with a single strum. I never figured out how to turn the poly tuning off and found it annoying when tuning for bass. Could have been user error but I returned it and got the Boss.

The Korg is simple and has a really nice display. If I didn’t have a tuner already, I would probably get this one. That display is really nice and my eyes aren’t.

Looper’s coming up next…

I have a Korg Pitchblack in a box. Will probably gear it forward. Use a Peterson now

The Peterson also gives you a very precise tuner for setups and intonation.
The better the tuner you use for this, the better the setup.

As for a tuner, Boss TU-3, Korg Pitchblack, Peterson Strobostomp, TC Electronic PolyTune 3, are all fine.

Fully agree on this list! I still use my Korg GA-2 for bass and guitar tuning and it does the job just fine.

Also it only cost 18 euros.

Oh Loop pedals. They are their own crazy world.

First, don’t plan to use multiple loop pedals unless you want to learn about midi so you can synch them. I found this out the hard way. Loops on separate pedals fall out of synch really fast if you’re not using a midi clock.

I mention this because (if I understand you correctly) you will need multiple channels. One for playing a stored loop/backing track and a second one for doing the live looping. You don’t have to do it this way but I wouldn’t want to mess with overlaying a loop on the stored loop while playing live. Using separate loops preserves the stored loop if something goes wrong. I hope that made sense.

I recommend a two (or more) channel looper with either USB connectivity or external SD card.

TC Electronic Ditto X4 Looper Pedal | Sweetwater
Simple two channel looper with an internal SD card and external USB. If you research this and find bad reviews, they are probably very old from when it first came out. TC Electronic worked through all that years ago and this has become a very well respected pedal.

Electro-Harmonix 22500 Dual Stereo Looper Pedal | Sweetwater
A lot more features with external SD card and USB connectivity. If you go this route, I reccomed the Looper Foot Controller The extra $65 would be worth it for the ease of control for how you’re looking at using it.

If you’ve got extra cash, I think this is the coolest loop setup out there…

Electro-Harmonix 45000 4-Track Looper Pedal | Sweetwater
Electro-Harmonix 45000 Foot Controller | Sweetwater
You put the foot controller on your pedal board and the four track looper on a mike stand shelf/table/whatever. It’s such a cool, well thought out setup with foot controls at your feet and hand controls at your hands. Unfortunately, that setup ends up being $650+. At that price I would have a hard time not putting the money into a Boss RC-600 which is a six channel looper plus so much more.

Edit: I take it back. I would still go with the 45000 for what I consider a more intuitive workflow.

I’ve had a few tuners, really liked my Boss Tu-2. But if I were buying one today it would 100% be a Peterson StroboStomp.

Even their iPhone app is a better tuner than any other I have ever used.

Wow thanks a lot for your answers, helped a lot !

For the tuner to be honest i feel like i prefer the design and the display on the Boss TU-3 so i guess that might be the one?

edit : the boss tu-3 is kinda out of stock in europe so i might go for another one