I’m currently working on the practice app ( A Practice Aid ) and @T_dub made the suggestion to add modes and not only the minor and major scale.
So far so good. I understood what modes are and wanted to start implementing this stuff and then I stumbled upon theory questions.

Am I missing knowledge to determine if the accidental scale should be for a sharp or a flat note in modes?
As far as I read up through googling the topic there is a difference in music theory for those scales although the scales on an instrument like bass are exactly on the same frets. It seems that it doesn’t matter for practice purposes but I would like the website to be consistent with music theory and not just ignore the issue because “it doesn’t matter for bass playing”.

The only explanation as to why it is sharp or flat is the simple reasoning that you need one of each letter note in a scale. The type of scale has a set interval pattern, so if the next note in the progression at the given interval would be the same as the first note, it will then become the next letter flat, instead of the same letter sharp. The driving factors are the interval between B and C, and E and F, where there is no room for a sharp or flat,
Did that make sense.

As far as accidental scales, I do not know if this is the reasoning behind it or not.

I assume that your explanation is the reasoning behind it? The scale is named after the note you play according to the scale.
So for Eb Major we have:
Eb - F - G - Ab - Bb - C - D
So it’s the Eb major scale and not the D#. Because the D# major scale would not work without repeating the same letters:
D# - F - G - E# - A# - C - D BUZZ SOUND D following D# deteced! wrong!

So for Lydian and Mixolydian I would take the major scales as foundation for deciding if it’s a sharp or a flat note and for Dorian, Phrygian and Locrian the minor scales. I think… I hope. I don’t want to have to go through each mode seperately to check.

Love the BUZZ sound, reminds me of some game shows when people get the wrong answer.

I’m a magician. I can write text that makes sounds appear in your head!

That was exactly the sound I was going for.

I think the note after Bb in your Eb scale would be Cb (a totally legit note played the same as B). There’s nothing WRONG with writing the scale that way, it’s just less convenient and easy to read.

As you go around the circle of fifths, at some point they switch from sharps to flats. The scale that’s commonly referred to and played both ways is F#/Gb. You could stop a step early and call the B major scale the Cb major scale, but that’s getting a bit silly. Or you could go one further and call Db major C# major, but that’s soooo many sharps.

Very informative, and good stuff to know. I appreciate the TMI, TYVM

Na, it’s a theory thread. That’s what it’s for. Thank you for the information. I’ll just have to read through it multiple times to fully understand what you are talking about. I’m not used to this stuff.

I think the note after Bb in your Eb scale would be Cb (a totally legit note played the same as B).

So you are saying it would make most sense to just list all accidental scales as both of the accidentals? So I would always write C#/Db for the scale on the flash card?

The only flashcard I’d write both ways is F#/Gb. I don’t think you’re going to encounter music written in C# major in the wild.

The situation with orchestras or concert bands is actually both more and less strange than that. All instruments in the same key will receive the same key signature (unless the piece is some weird experimental something). By “in the same key” I mean something you may not know about, though.

You may know that the bass is a transcribing instrument, in the sense that, if you and the piano player were to play from the same piece of sheet music, your notes would come out an octave lower. Well, some other instruments are also transcribing, but not by an octave.

In the same sense, clarinets, tenor saxes, baritone, and trumpets are in Bb (because what they call a Bb is really a C).

You might wonder what the heck is going on. The reason the instruments are in different keys is that it allows each family of instruments to have the same fingerings across the family, and all of the woodwinds (except the double reeds like oboes and bassoon) to have basically the same fingerings. So if I switch from an alto sax to a tenor sax, I can still read the tenor sax sheet music and play the notes the same way, and don’t have to learn a whole new system. Or if I switch from trumpet to, I don’t know, tuba, the fingerings will be the same.

Flutes and violins are both in the key of C. And their music will always be written the same. When I say flutes are more comfortable playing in flats, I don’t mean that they would get their music in Eb and violins would get it in D#. Everyone would get Eb. I just mean that if you were writing a piece for a flute choir, you might be more likely to put it in a key with flats in the first place. Flutists can certainly play in keys like A, E, and B, it’s just not their bread and butter.

IMHO, and this is just MO.
I would make one for each.

This excercises for me is not as much about scales and scale shapes as it is fretboard recognition.

I can run scales all day by shapes. I can run modes from Ionian to Locrain in progression thru the diatonics (think I said that right, but Goode if for this example). All day, thru. Memorized shapes and patterns.

The flash card for me is , find the note quickly on the neck and play the mode called, is one of, or 3 of the shapes I am practicing.

For this, it is beneficial for me to see a C# Lydian and a Db aeolian ( or any of the modes in either note)

Again, this is my opinion, anything decided is fine with me. I love this excercises to learn the fretboard.
Who knows, with drum beats, I may just play free jazz over the root note, using the mode displayed.

Hey all, you’ve almost got this right, but you’re missing a couple pieces:

Yes, each scale needs to have one of each letter. So no Gb in a G major scale.

But the other reason we choose one over the other is ease of use, and avoiding double sharps and double flats.

The circle of fourths/fifths shows all the commonly used keys: 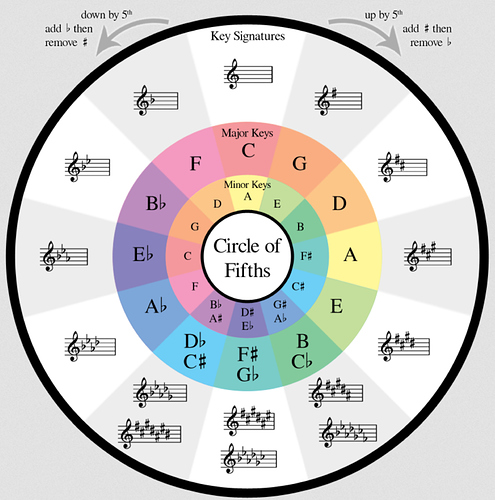 So in the case of F# major vs. Gb major, they both end up with 6 accidentals, so they’re at about the same messiness level. Choosing between those depends on genre, who you’re writing for, etc. (horn players like flat keys, guitar players like sharp keys, that kind of stuff)

C# and Cb major are the outside edge of the typical circle, because once you hit seven sharps or flats in the key, you’ve sharped or flatted every note in the scale. So if you keep going from there, you’ll have to start double sharping or double flatting notes.

For example, here for your enjoyment, the G# major scale:

Yuck. Nobody likes double sharps, unless you absolutely need them (which is another topic). So 100% of the time (or at least 99%), composers use Ab major, not G# major.

TL;DR - you can just copy the options from the circle of fifths for your practice app.