Yes. The B3n is the top end model from the same generation as the B1four.

The rough breakdown for the last few generations of processors and algorithms is:

The B3n has a more powerful processor than the B1four and can basically host 1-2 more effects simultaneously. It also has a nicer UI for Stomp Mode - more buttons, footswitches, etc. Definitely an upgrade, I liked mine.

The real upgrade would be the B6.

Or best, a NeuralDSP Quad Cortex

Thanks @howard - appreciate it…

The real upgrade would be the B6.

Or best, a NeuralDSP Quad Cortex

But I was looking at the B6, and wish I had considered it prior to buying my DAI, since (as I understand it) it functions as the DAI as well… $500 is an expensive pedal though. That’s more than I paid for either of my basses.

I have a used Zoom B3 I picked up for about 80 bucks and am super happy with it. I also have the G3 which is the guitar version and have played them Both out pretty regularly and gotten plenty of “toan “ compliments on them. The XLR out, the the tuner, the looper, the ground lift as well and the pre/post switch makes it a super useful piece of kit for me.

I used to own a B1on too and it was actually pretty good as well.

I think most people with Zoom multi-effects pedals have come across their “preset library”. Not trying to duplicate that repository - but is there any interest in a thread here that would share patch settings?

This reminds me, there’s a new Zoom in town: the B6. In a different price range than the B1 Four, if you ask me

So what do we think? 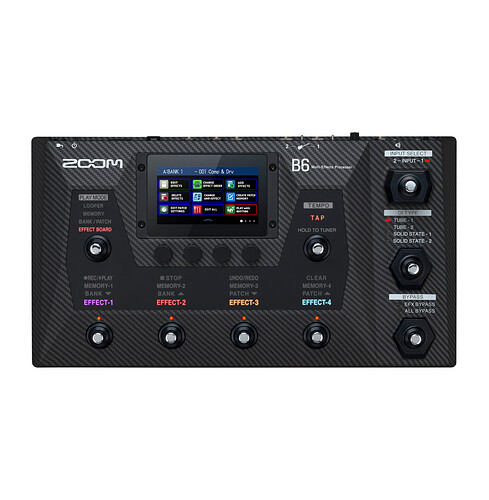 new Zoom in town: the B6

Looks compelling. If I ever tire of my Zoom B3n I’ll give that a look.

There was some discussion around that when it was launched.
Linky here

Something for the Zoom fans perhaps? Seems a tad pricy compared to the rest of their range though.

Nice, but also pricey and only 10 effects. Edit: ahh it’s 10 NEW effects along with the old faves

This reminds me, there’s a new Zoom in town: the B6. In a different price range than the B1 Four, if you ask me

So what do we think?

A year! Okay, apparently it’s not as new as I thought it was

I think I’m up to 5 different zoom pedals now. Have played them all with bass and guitar and there are a lot of times I like it better than my boutique analog things. Of which there are… a few. Most of my zoom models are older and lack an aux in. That would be my only complaint.