Anyone else out there have any suggestions, pros/cons on specific DI’s? I just started down this rabbit hole after working with a couple different engineers and drummers in my local area who have their own recording and live venue practice facilities. 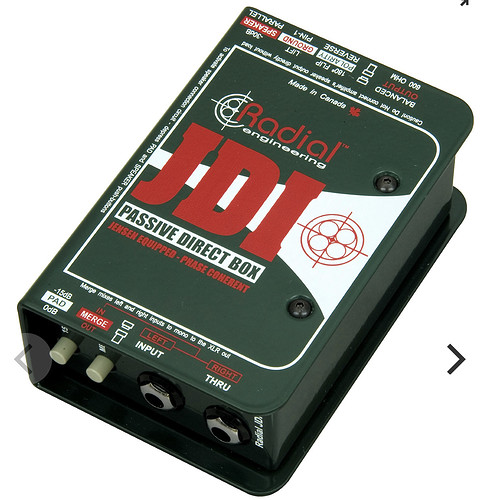 So after spending hours on end trying to decide on which DI to purchase, I finally settled on the Radial JDI MK3 Passive to use for all of my bass’s. I know that the “typical” rule of thumb is to use “Passive” DI’s with “Active” bass’s, and “Active” DI’s for passive bass’s but in this case after listening to several (many), this one appeared to work pretty damn decent with all of my bass’s both active and passive…

Both of the facilities that I’m currently playing at have full PA systems and I really needed something good and simple to plug any of my bass’s into without having to haul around my gazillion pound Ampeg BA115 amp…. Getting too damn old for that…

Anyway, time will tell as to how it will work out doing both studio and live gig performances…

You can never go wrong with the Radial JDI. They are bullet proof and always sound good. I keep a Countryman 85 DI in my gig bag, but that’s mainly because the little clubs that I used to do FOH for always had them, and that’s what I’m used to.

Thanks @LeftyChad - I was looking at that one too…. Wanted it, just not ready I guess…… Especially since my main venue is Southern Rock, Motown, Classic Rock, and Country…. When I started listening and comparing the differences using different strings, bass’s (and price), I decided to at least give this one a try… Hell, who knows what yer gonna get plugging into any PA system anyways…. I guess my main concern was to have something reliable that wouldn’t jack up or mess with the sounds outta any of my bass’s…

I (personally) believe that we as bass players sometimes overlook the importance of a good DI when we play venues or are in a recording studio… DI’s are not pedals and do not distort, change, or manipulate anything sound wise ( at least from my old ears)…. They do however provide a good “clean” (depending on the DI) signal to both an amp and the facility’s sound system… (@howard could no doubt help here). All I know that is that without them (other than recording at home) they are really a Godsend when plugging into a sound system at either a recording or live venue…

Here I will show my ignorance. I still don’t fully understand what a DI is and why/when you need one.

The DI box allows you to send the mixer a clean direct signal over hundreds of feet of cable while still feeding your amp on stage. Recording engineers use the DI signal for re-amping or amp cabinet emulations. Churches, festivals, and othe venues don’t want to deal with bass amps and expect you to run directly (DI) into the sound board. Yeah they covered it; it’s what you use to connect to a mixer, especially if over any distance at all.

For home use they are mostly useful for breaking ground loops. You can generally just plug an instrument cable right in to a mixer or DAI at home.

Most good bass preamps have them built in. If your preamp has an XLR out, it’s got a DI.

Churches, festivals, and othe venues don’t want to deal with bass amps and expect you to run directly (DI) into the sound board.

Yup,…. Thanks @LeftyChad …. A great explanation, and yes @howard they do work well in a home studio….

My main use will be to eliminate having to lug my amp to the two different facilities that I play at. All I need to bring is my bass’s and my DI….

Yeah for sure. Then you can take the next step like me and just go completely ampless

Ok sure I have 160W of studio monitors but still. Not having a bigass bass amp and cab is kind of liberating

Or if you’re contemplating your second hernia surgery and thinking, “ya know what, I might not get that Ampeg after all”

One of the reasons I got the Aguilar Tone Hammer pedal is people refer to the DI as bullet proof, excellent, etc. I also like the effect i has on the tone.

Most pre-amp pedals have a DI built in and you don’t have to have the pedal on to use the DI. They will still work without the coloring of the pre-amp. At least, that’s the theory. I haven’t used enough pre-amps to say whether this is consistent across the board.

@howard what is your experience with using a pre-amp DI as far as coloring goes? Meaning without the pre-amp engaged.

Totally transparent for the ones I have owned.

Also, if you don’t have a DI, or a bass preamp, but want a cheap DI, just get the Behringer BDI-21. It’s one of the best values in gear full stop, sounds amazing when on (it’s an exact clone of the original SansAmp BDDI), and when not engaged still functions as a transparent DI out.

I have heard people rave about the REDDI, Lanny: 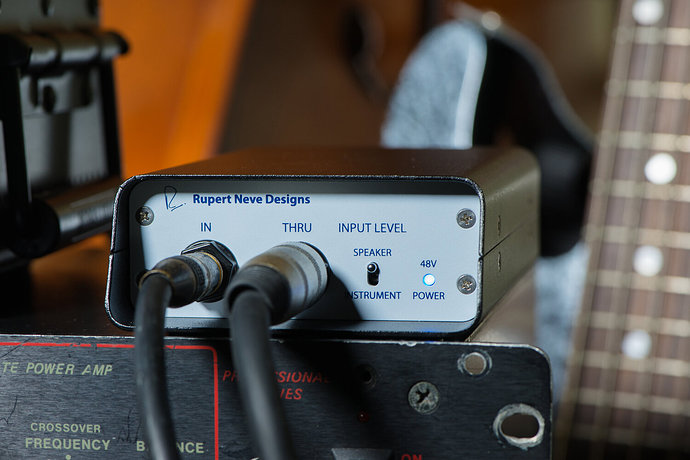 Both probably at the upper end for DIs

Actually the RNDI is “only” $296 (euros similar price) and works for passive and active. The REDDI starts at $960. I think the REDDI is often used for large veneus and recording studios.

I’ve always prefered a little preamp over a DI for this use, but I also have a cheap passive DI that I use when I need to output on XLR when the preamp has jack only. I never really understood why some passive DI are so expensive, maybe I’m missing something here.

why some passive DI are so expensive

Is it perhaps because the components (especially the transformer) need to be very high quality in order not to lose the “harmonics” from the signal??

in fact in a passive DI , there is only a transformer

It seems to me that the expensive ones have some kind of amplifier. Still the unique selling points seems to be the transformers.

Same, I just use my Palmer pocket bass which even has a pre/post toggle for DI… That thing is rugged.

Definitely check this out…has audio, too…

Hey guys! Sound guy here. I own both a Radial JDI (Duplex) and a REDDI!

Some myth busting: There is no reason you need to base your active/passive DI choice on whether your bass is active or passive. Buy a quality DI, regardless of its tech, and you’ll be just fine.

For my regular practice at home, I run my bass into a JDI Duplex, which goes into a Seventh Circle J99 preamp (John Hardy/Jensen Twin Servo clone), into my interface. I like the JDI Duplex for this because it’s absolutely quiet (passive, after all), and has a button to switch input from 1/4" to XLR – I use it as a mute button when unplugging my active bass. The sound that comes out of a JDI is tonally the same as the sound that comes in. It adds nothing, and takes nothing away. I briefly owned a Mesa Subway+ preamp pedal, and returned it because it was noisy and didn’t sound nearly as good or clean as my JDI!

The A Designs REDDI… I use this for recording, and I get an absolutely massive, growling tone out of it. It also sounds amazing on top, and is just all around the best DI I’ve ever used. Yes, it’s VERY expensive, but you do get something for all that cash.

I used to mix sound for a band, and the acoustic guitar player had a Radial J48 active DI for his guitar. It sounded really good, and specs indicate it’d work very nicely with a bass, too. I believe it’s the same price as the JDI. You really can’t go wrong with a Radial DI. The Countryman active DI has a stellar reputation, but I’ve not personally used one.