Have you taken the B2B course yet? Im pretty sure he covers minor arpeggios at some point (don’t recall where).

@mottglenda check out this thread:

Struggling to create bass lines without overwhelm? Get yourself some bass shapes. [5 Easy “Shapes” for Kickass Bass Lines (Bassist Shortcuts)] If you’re doing the Beginner to Badass course, this lesson will best fit into the theory you learn in Module 7 and onwards, plus the syncopation skills you’ll learn starting in Module 8. Easy Bass Shapes Here are all the shapes I taught in the video, for your reference! Remember, all you need to do is find your root note(s), then plug in th…

I find that barring a fret and adding the 5th with the ring finger on the A string and plucking E A and G strings sounds the best.

Really? I think the A-string based chords (or D/G string power chords) sound way better in the mix, the E-based ones get muddy fast. That said I don’t chord too much on bass (greatly prefer guitar for this).

Regardless, first I want to echo Pam’s question - @mottglenda, are you asking about chords, or arpeggios/scale intervals here? 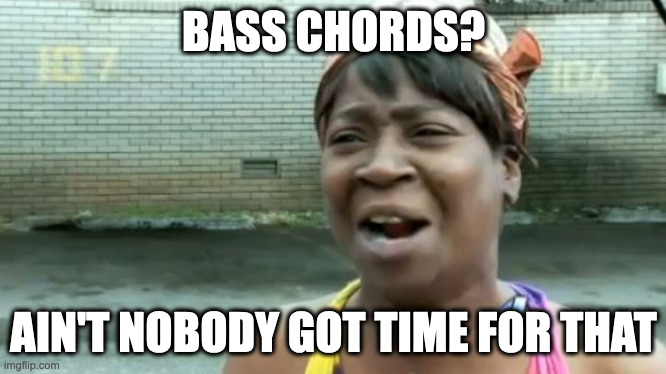 Indeed no time for that. If it’s chords, just go root-5th

Power chords have no major or minor identity.

The “easiest” way to play major and minor chords on bass is to play root-10th (root on E string; 10th on G string).

are you asking about chords, or arpeggios/scale intervals here?

I know two main ways to play them.

You can also move back down through the notes and “end” on the root. I think for starters this ending should be on a chord change in the song, e.g. the first beat, to emphasize that you now play the low root.

Inverting the root one octave up doesn’t work as well on bass, as the lowest note might sound like the root and mess up people’s expectations.

If you want an E-string based chord shape, fret the root, the fifth, the octave, and then either barre the G string down from the root for the minor, or fret one note higher on the G string for the major. These are the E-shape barre chords. Ignore the two highest strings here:

These can be quite a stretch on bass though, especially below 5th fret, and as I mentioned, I don’t really think E-string rooted chords sound very good on bass. A and D string rooted power chords sound way better IMO.

I actually am generally not a fan of anything but power chords on bass. Most others get real muddy fast IMO. Really prefer guitar for this. My go-to minor chord is just a root-third.

Great thing about bass is that it works anywhere on the neck with the same shape. Just find the root on the E string and play that shape and you have the minor chord.

My go-to minor chord is just a root-third.

Did you mean Root-Flat Third?

Did you mean Root-Flat Third?

Minor third is simply a third. It’s not flat. A flat minor third would otherwise be known as a “second” interval

We know the chord in question is a minor chord, so I would have just called it the “third” too. The minor third is only flat in relation to the major third, which is a different interval.

Yessir, my apologies for not being more specific. Root-minor third for minor chords and root-major third for major chords (major is just a half step up from minor on the G string, same root!)

Minor third is simply a third. It’s not flat. A flat minor third would otherwise be known as a “second” interval

We know the chord in question is a minor chord, so I would have just called it the “third” too. The minor third is only flat in relation to the major third, which is a different interval.

It gains context from the other instruments being played.