Hi guys, bought myself the little do-it-all amp cos it got some good reviews and wasn’t all to expensive. I’m new so I want to know from you guys if it was the worse buy ever or the coolest.

So far I love it! It’s easy with it’s build in presets and the power is strong enough to scare off all my neighbors, especially in these Corona times when everybody is locked up 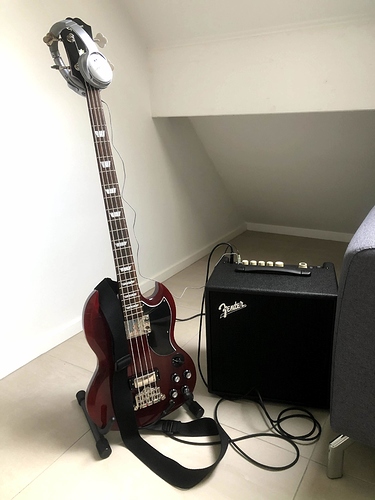 Fender’s Rumble series is solid. I used to have a normal Rumble 25 and it was a nice little combo. Lots of people love the Studio 40, which has effects built in like the LT25. Seems like a great choice for a practice amp; good size for home practice, nice tone, and you get some cool effects built in for fun.

Only real drawbacks would be 8" speaker (vs 10" or larger) and low power for jamming with others, but neither of those are really required for a practice amp. I’d say you made a good choice.

I also sold my Rumble 25 for something like 75% what I paid for it, so when you upgrade later you will likely get some good value back out.

Thanks @howard for your feedback, well appreciated!

I also started out with a regular Rumble 25, and you’ve got an improved version of it which is perfect for a small practice amp. Good choice!

Great Amp.
I have the studio.
Will you be getting the footswitch?

I myself consider a bigger Rumble. I was looking for the 100 but I’d like a horn, in the hope it would work well with the Bass POD Pro. I’d like a very “linear” amp, to make the sound with the POD and have the amp only make it louder. I’ll have to test.

anyway my Ampeg is already for sale …

What ampeg is for sale??
I have a rumble, and I’ve been trying to get an ampeg.

Suppose it depends on the sound you’re going for… but I’d hate for you to regret it down the road…
If it’s a tube powered SVT or B-15, can you afford to keep it?

What ampeg is for sale?

I’d hate for you to regret it down the road

won’t happen ! I’m in a love/hate relashionship with this Ampeg and it’s mostly hate

this thing is not reliable and that’s not acceptable for me.

not at all this range ! the BA 115-HPT has a tube preamp and MosFET power amp. it’s not a bad amp, it’s just … well … it’s just random. it’s pretty much the same range of the current Rumble amps in fact. sounds OK but not incredible.

also I already have a ton of tube amps (really way too much) and that’s not what I want now. I’d like to use my rackmount Line6 Bass POD Pro which sounds really awesome for the main tone shaping, and have a combo with a very linear amplification curve. I just want an amp in a reasonnably comfortable power range (let say 100 to 500w) which will make the sound I have (with the Bass POD Pro) louder.

talking about tube amps, in the past I used to build, repair, modify guitar tube amps. you can ear some of my amps on several french metal records

I know how to do those things and I still have a LOT of parts. might build some kind of 100w version of a B15 one day (I have all the parts). because, yeah, a B15 sounds incredibly awesome. how could someone disagree ?

Build two! And ship one to me in California!!

Hi @SamAdler I’d be interested to hear what your views are on the LT25 now, are you still happy with it? Cheers

Hi @Mark_UK
So far the LT25 does exactly what I hoped he would do, but again, I’m a total newbee. Last week, when I started jamming a bit on some youtube tracks, I started to use the extra sound which are standard in the box and some of them were a bit weird, but others were so fat and nasty

So far I love it, I really do. Sound is great and loud enough for my apartment, and it’s just easy! Lightweight, small and simple. So yes, for me it meets the expectations.

Hey @Mark_UK
Can you explain me the ‘computer interface’ which you mentioned? There is a USB connector, but haven’t really read the manual yet

so unaware off all possibilities of the LT25

Is its USB interface actually an audio interface, or is it just for updating patches?

Yep. It’s for management of the system and can be used as a Digital Audio Interface (DAI) for recording to a computer. Pretty nice feature.

Hi @SamAdler, I’m only going on what I read in the specs sheet for the LT25, there is this picture/text: 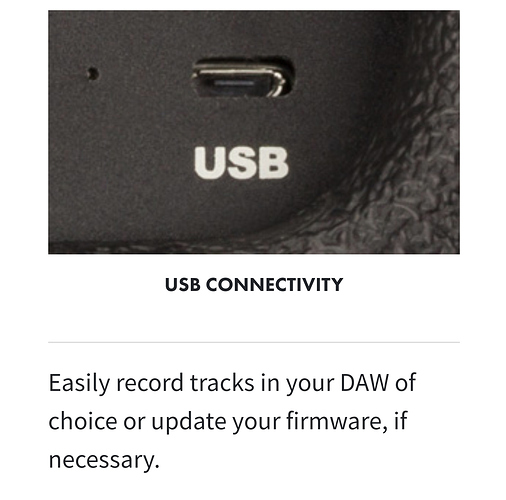 I’ve had my Fender Rumble LT25 now for about a month now. I purchased it because of the price and reviews of it’s features. I am really enjoying the amp and even more now that I got around to updating the firmware. DO THAT FIRST!!!

I’m kicking myself for not doing it from day one because it solved a buzzing problem I was having when using the blend knob to switch between my pickups. I honestly thought there was something wrong with the active EQ on my Ibanez SR370E, but it was the amp after all. (thank God!) My bass sounds MUCH better after the update too!!!

The manual can be gotten here… Rumble LT25 Manual

However the manual does a poor job (basically none) of telling you how to update the firmware.

I am writing this from the PC perspective, so if you have a MAC your mileage may very

Install the software, open it, connect the amp to your PC, and then turn the amp on. It will take a min or so for it to recognize everything and complete the setup. Once it is happy, you can update the firmware.

If everything works properly the Fender Tone software will see the amp needs an update and walk you through the process. You may have to hit the re-scan button in the software to get it to see it but it only takes a sec to do that.

The firmware update process is pretty automated and takes a little over a min to happen. Just don’t power the amp down while the update is in progress. I don’t think you can brick it totally, but I think you would be calling their support at that point to fix it.

Once the firmware update it done it unlocks a TON of features that should have been there from day one. As much as you can tweak each preset, amp, pedal, and effect on the Rumble LT25 itself, you can do a LOT from the software. You can experiment with each amp and pedal and make changes to the pedals themselves in the software . It’s really cool and pretty easy. Then with the update in place you have 30 blank spots (31 to 60) to load more presets from the AMP, or from the Fender Tone app, or save your own tweaks to a preset or create new ones from scratch.

Want to know what a compression pedal does and sounds like, there is a virtual one to play with. EQ’s, Over Drives of several flavors, different amps, Wah pedals, delay, sustain, echo, phaser, synth, it’s ALL in there.

This is a really fun toy!!! I find myself switching between presets when practicing the workouts. It makes playing the same thing over and over very enjoyable. Granted there are some in there that makes cool sounds, but I’m not sure how you could actually play a song with them. But it’s all good fun!

Hopefully I’ll get around to tying the recording ability off the USB interface this week too.

Good info @csmundell I’ve just taken receipt of my LT25 and will update the software.
One minor disappointment is that I have read the USB interface to the computer which you can use as a DAI only passes on the guitar line audio, and does not mix in the audio from the aux input jack on the amp too. Would have been good to play against a track on the aux in and record it all.

Damn! That’s a great write up. Thanks for putting all that together.

@Mark_UK There are a lot of different ways to achieve what you want. It’s very doable and will make more sense when you start working with recording software. Setting it up the way they did was making sure you get the cleanest recording of your bass.

OK, I may not have COVID-19, but I certainly have GAS. After reading the entire thread, I ordered the LT25 on GC. As soon as I get a delivery date, I’ll post it. Thanks to everyone for the informative discussion.