Melbourne's back into lockdown number 4

I think we are all in the endangered group are we not?

No, we’re definitely not. Available data speak quite clear on the factors leading to severe cases of Covid and important comorbidities. I, as a healthy 35 yo, will, with the huge statistical body of evidence, be fine.

With that in mind, I am not going to let anyone inject me with something that is a) only against the severe course of the disease (not a total immunity -> you can get the disease and transmit it forward) b) was developed in a fraction of the time needed for the regular vaccine to be developed/tested.

I get vaccinated against Flu every year, but this one? No thank you. 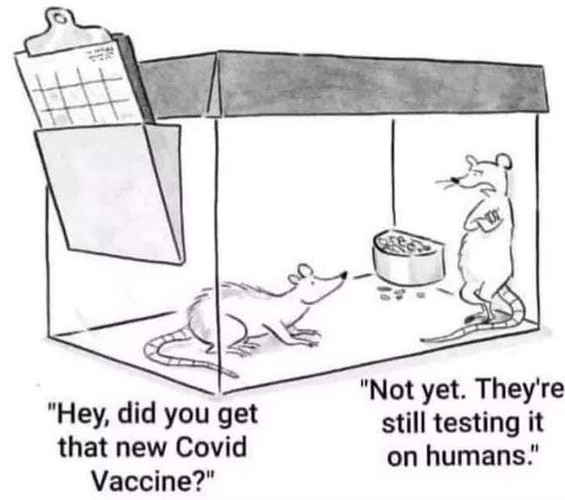 By not following the rules of educated disease specialists and making up your own rules.
Look at the @Steve_A post. He is right.

If people had listened a year ago I wonder where we would be now???

It appears that some still think they are more knowledgeable than the people that do this for a career.

Sorry to hear once again. I always vent my rage at the WA and Qld leaders.? Right when we need everyone getting vaccinated they saying its worthless. Not good. But at least youre positive mate…practice. Hopefully itll be quick…and then we can join the rest of the world again. After taking my missus back to Sri Lanka 1st the next pilgrimage will be to the States ( might even get to meet Josh!!!)

Is it possible you are both correct, just depending on what situation you are currently in? If you are in an area where the vax is not readily available to everyone that wants one… you could be spreading the virus to others without knowing it, making it selfish to not wear a mask or social distance. However in the situation I find myself in now in CT, the vax has been available to everyone who wants it over the age of 12, and everyone who wants one has had some time to do so… so now if someone chooses to walk around unvaxed and unmasked the only people at risk are themselves and others who also choose to go that route. You are no longer putting my family at risk, so it is your decision which I respect.
Just my opinion, but I think the widespread availability of the vax in your community is the deviding line between selfishness vs freedom of choice.

Indeed, that’s why we are here…

Cheers from Canada, hang in there!

I feel very badly for those in lockdown in Australia and Japan . . .

That’s the funny thing. Japan’s never locked down. Not once.

The “State of Emergency” just means businesses are encouraged to have people work from home, and things like bars and restaurants have to close early, and are asked to do only takeout. Lots of places did close down or go on really restricted hours voluntarily, and people went out much, much less.

The only thing that kept it from taking off like wildfire here is people were good about wearing masks, keeping a few feet apart when possible, and avoiding gatherings. That’s it.

And every time people have relaxed from that, there have been big spikes. It’s like clockwork around national holidays.

And so, over time, the problem is slowly getting worse and worse, to where Osaka now is at the breaking point, and Tokyo is trucking along at an unsustainable rate.

This is generally because the government is ineffective here at stuff like this. Also because there’s as many people below IQ 100 here as anywhere else in the world, of course. And understandably after a year and a half, fatigue is setting in. It’s a really bad combination looking forward.

I Know why, they are both Tossers @derekmcanally, they are very quick to shut the rest of the country out,
Cheers Brian

I’ve been trying to get back there, meanwhile “waiting for things to calm down”, but it seems like they’re getting worse.

We are just comin out of a 6 week lockdown in Canada. I highly recommend getting “Rocksmith” to step up your bass practice. It helped me improve my playing - big time.

Roads are jammed. Boss is starting to get the idea I could be in the office. Parking for shopping is getting difficult. I could go for slightly more locked down than this.

Traffic in NY is nuts! Its as bad as when everyone was going to work, and a lot of businesses are still shuttered til June/July.

It’s heartbreaking to see the small shops and businesses boarded up here. No doubt more will go under the hammer this time creating more financial and misery for people.
I don’t know the answers but I think things are looking bleak

heartbreaking to see the small shops and businesses boarded up here.

That’s been one of the worst parts here too. Many average entrepreneurs are going under. More gets consolidated to the giants.

NYC looks like a wasteland in some areas. Stores just wiped out. The garment district used to have dozens of fabric houses around FIT. I think there are 3-4 left across as many blocks. Rinse and repeat across the city. People flocked out of NY so apartments are empty too. The people next door to us bought the house sight unseen to get out of NYC, and we live 30 min north!

On the flip side of things…To make matters even worse, the big guys are buying up shipping containers and routes from Asia leaving the medium to little guys having to pay rediculous up charges to get their goods to the US. My wife’s company sells dorm room stuff to kids going off to school and loads of her stuff doesn’t pay to ship it here. So even smaller businesses that produce goods are screwed. I think this is why so many things are delayed in coming out. Been waiting on a pedal and a power supply for months.