So, this came from Amazon today.
Having fun with it.
I know 95% of 3 of the songs, but I want to learn them complete, plus I would like to learn more of these anyway.
This was a GREAT Bass album. 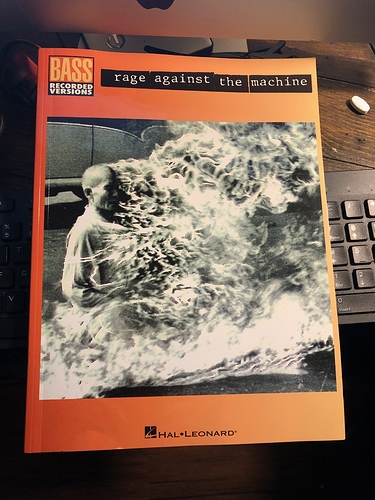 I used to cover Bombtrack and Killing in the name of with the band me and my Buddys had back in the early 90"s.
The bass line to those follows the guitar line pretty close, so learning them on bass was pretty easy, as far as being able to play the notes.

They were lines I was playing on bass in GC, prior to getting a bass, when I was testing them out. Of course, technique was horrible back then, and, although it is not anywhere near where I want it to be, it is 20X better now then it was.
It is good to be able to look back and see progress, this is a good measure for that, thinking about how horribly I was noodling them in GC in Hollywood, trying to decide if I wanted to play music again, and if I wanted to get a bass instead of guitar.

From that trip, I took one more trip to the GC in Fountain Valley, by where I live, and figured out what the cheaper basses were, and how much they went for, so I could look on Craigs List and know what prices were. I learned about the Ibanez GSR200, that it lists for $199, and at the time it was 15% off. So when I found a post for one, with a practice sized amp for $150 on CL, I offered the guy $130, he took it, the rest is history.

So, what I am getting at, is this book is significant to where I am today. Had I not remembered these songs, the guitar line, I may not have had the balls to pick up a bass when I was in GC with some friends that were picking up some drum sticks and strings, etc…

It was in my cart for a long time, since about the time I got that Ibanez, and that was about 2 months before Covid Lockdown, so February probably. here I am about 7 months later…

This was a GREAT Bass album

I should clarify, and not cut it short. It was a great album all around. IMO, for more than just the bass, it was new, fresh, creative, different.
They needed a sound nobody else had, and they created it.

The bass alone still can sell it.
The Guitar alone could too.

Having fun learning the songs too,

@T_dub I was a huge fan of RATM Tom Morello was the master arpeggio player and his techniques were truly innovative.

Tom Morello was the master arpeggio player and his techniques were truly innovative.

Agreed, I love him, and he is so versatile. He covered for Steven Van Zant on the Australian leg of the Bruce Springsteen tour when Steven Van Zant was in Norway filming Lilyhammer for Netflix.

I’m new to playing Bass but struggling to find Tabs to songs I like. There’s lots online but most are ok-ish, Now I’ve just searched Bass recorded Versions and damn!!! I think I’ve found exactly what I’m looking for!

You sir have made my morning. Time to go shopping on amazon =)

send me a PM with your e-mail address, I can send photos

Ironically, I found the same book yesterday from when I thought I wanted to play guitar, before I got smart and realized I really wanted to play bass

This is a GREAT @JoshFossgreen video, a tutorial with tabs and play thru.

Somebody wanted me to show them the link to this video, and there are others that may want to see this if they have not come across it on their own.

This a great song to practice your SLAP on. it is not too difficult to learn, and it can really help you improve slap, it sure did for me.

There are tricky 16th notes and ghost notes, if you can get the timing right, you can sort of play this without some of the ghost notes.

So, if you want to learn a great Rage Against the Machine song, and work on your slap, this is an awesome tutorial by Josh.
Don’t fret, he completely breaks down every single part of the song, and teaches them in three speeds (sound familiar B2B people, slow workout, medium workout, fast workout).
Starts with the main riff, then breaks down the fills, and the rest of the parts of the song.
Thanks Josh, this was such an awesome video, it helped me so much.

Hope some of you find this fun and helpful

Indeed, i learned Higher ground from josh tutorial too!

Cool, I will check it out