Omg. FedEx is killing me

For the members living in socal, I live in West Covina you get the picture, lol.

This is not the first time.

I ordered a few things from Fender on Sunday, it turnout they have it in or near their warehouse in Corona about 30 minutes from me it was picked up on Monday then travel to San bernadino, 1 hour further out. Then it’s supposed to be delivered on Tuesday(yesterday) but no it travel to the next location city of industry (15 minutes from me), it’s where I usually have to pickup if they leave the ticket.

Today updates, I was expecting to be out for delivery but no, it’s now on the way to Arcadia, the next location further from me and hopefully I’ll get my package sometime tomorrow. Hmmm!

I don’t know how they stay in business.

I ordered a guitar last week, was sent two day air at no cost to me, probably due to the holidays. was picked up Thursday last week. Made it to the hub Friday.

Sat at the hub Saturday and Sunday. Monday morning before work still showed in the hub in Indianapolis.

Next thing I know it’s delivered. They must have a teleporter. There were no updates.

If I weren’t crazy already they’d drive me there

They have employment issues like everyone else. And an overloaded system.

Ups and Amazon are very efficient with their time. USPS while pretty slow at times but they do deliver both Saturday and Sunday.

Each destination, FedEx has to unload and load the packages why would they spend so much time doing that?

There are plenty of memorable experiences with Amazon and ups for me. Like the package from ups scan in Utah at 2am and out for delivery to me at 7am.

Amazon order delivered the same day, in this difficult time.

Unless there’s insulin / or an organ on ice for some kind of transplant in that box you ordered, then let’s all cool down.

Love from the frozen North

I know it seems strange . . . but it’s the most efficient route overall for that particular day.

We mortals will never fully understand . . .

No it’s worse, these are GAS stuff, as we all know, it’s critical, lol. Happy holidays.

Fwiw, it’s not a rant about holidays delivery, FedEx has been doing this for a long time now.

I could tell stories about Fedex, but I will just say I’m an IT guy. Drives me nuts when you can’t trust the online systems. Getting a package a day late? Happens all the time. No worries. The bad data gets me mad.

The bad data gets me mad.

I have had several convos with nice FedEx people the past few months where they all have told me “don’t believe what you see online or in the app for status. They must be having major system outages. 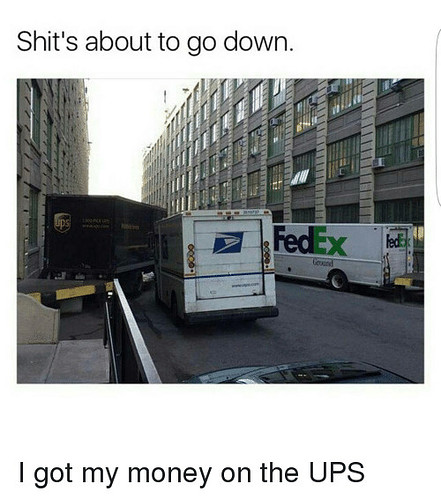 LOL yeah the postal truck doesn’t have much of a chance!

My GF got me a new (used) amp for early Xmas. It’s a neat little Carvin Pro Bass 100, but that’s beside the point. It was coming from Northern California via Fedex, and I’m in Southern California (about 20 minutes north of Disneyland in a town called La Habra).

It was picked up last Friday, and immediately went into “shipment exception”. I looked that up and it means that the shipment has been received but can’t be shipped because the address is messed up or it’s been lost or something like that.

Anyway, suddenly, the following Monday it’s out for delivery and it arrives at about 1:45 in the afternoon.

I live in West Covina

Hey I used to live there! Went to West Covina High for 9th and 10th grade. Then I moved to Nogales and got released into general population at Nogales High School. I was like 1 of 5 white kids in the whole school! Lol

I live in West Covina

Hey I used to live there! Went to West Covina High for 9th and 10th grade. Then I moved to Nogales and got realized into general population at Nogales High School. I was like 1 of 5 white kids in the whole school! Lol

I went to south Hills. Now I live about 3 minutes away from West Covina high by the church.

To get how that weird route works imagine you are in a grocery store do you pick up the beer and chips and run to the register and then your car and then home and then return to the store to get get bread and coffee and repeat the above and then go back for meats and veggies? You do the same thing everyday around the house and at work…doesn’t help I know when waiting for a new toy. Amazon has far more items going to a general area than say Fender does and doesn’t have to collect enough stuff going to an area to send it more direct to be cost effective…Back to the grocery store…imagine having 7 kids who would actually bring you stuff you wanted from other areas of the store and not just Twinkies and Ho Ho’s then you’d be exactly like Fed X or UPS

I’m always hearing horror stories about the American postal system where theft and damage and so on are seemingly commonplace, and which bears more than a passing similarity to the postal service in India or various African counties. Despite the stick that Royal Mail occasionally get I think we must have it lucky.

The American postal service isn’t as bad as the reputation it has…right now in fact, UPS and FedEx are far worse.

Yeah - I’ve never had a bad experience with USPS. I’ve had some delays, but never anything going missing. In general I have found them to provide excellent and reliable service, even delivering international packages through customs.

I’ve been reading to try and figure out what went wrong with FedEx here.

Prior to pandemic (does anyone remember the ‘good old days’), FedEx was focusing on small and medium business vs. e-commerce (except WalMart and Target contracts) as they made more money per package. This had impact when e-commerce took off during covid.

Seems its not one smoking gun but a few strategic decisions that led to them being completely knockered once the pandemic ordering got in full swing, but it’s primarily due to- ground routes.
A while ago, they would drop many ground packages to local post offices for final delivery, but but when the e-commerce surge kicked in, ground deliveries obviously went nuts. FedEx had decided to take back the final deliveries to increase ground truck optimization, however, they were not ready for the surge’s sheer volume. My cousin’s husband works at the post office and he was mandated to work Sundays to deliver FedEx only packages for a while back before they took the final routing back.

UPS already had a significant ground route infrastructure and was in bed with Amazon. So their deliveries do have a better on time %, but they were already in a better place to deal.

Couple this with their main hub(s) being in the mid-west, where weather and very poor employment literally crippled them on several occasions, they simply have not been able to recover.

What I have liked about FedEx is the ability to hold a package at a pickup location, so things like basses are not sitting on the stoop all day in rain or cold or hot. UPS used to offer this service, but not any longer. FedEx ground also used to be cheaper than both UPS and USPS, but not any longer. I am liking the idea of a UPS store mailbox that gives you an actual address and allows to have you pick up packages for the cost of the mailbox for a year. It’s worth it for high value packages I think.