found something on youtube that you want to share? been eyeing something new? share with us your discoveries! i know we will probably get a bunch of vids with the standards here (i’m looking at you boss/big muff/darkglass), and that’s fine. but what i would really like to see are some things off the beaten path. for instance, i just saw these two beauties: 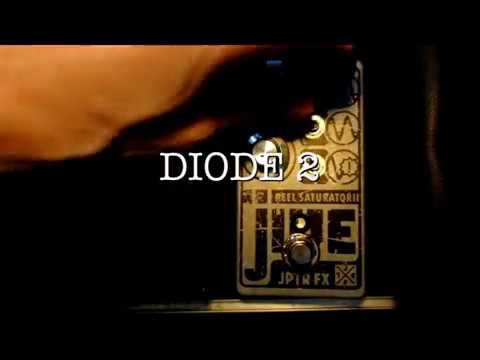 they just put out a mini version of that jive pedal, and i think it will be sitting in my living room soon

Just saw the new release YouTube vid on that guy today. looks like a great pedal. for only a few quid more (like my slang there, I have no idea if I used it properly or not. lol) you can get the double pedal that has some very interesting and probably useful wiring possibilities.
I don’t have the website, but it is defiantly worth looking up.

I wonder how good they’re shipping across the pond is?

at this point smaller is better for me, i’m running out of room

Yeah, but with the big one, you can use it as two OD pedals, one in front and one at the end, or two at the front, two at the end, so you could technically get rid of one pedal to make room for the single to take place of two.

Of course, that is just “what you could do”, and I am only pointing it out simply to state what you can do. I am not even planning on getting one, but if I were going to get one, I would think long and hard about stepping up to the big one.

i just…
i have no words for this one

and of course the awesome miku pedal. they have a few bass demos but it doesn’t work so good for them. but if i played guitar, i would be all over this. skip ahead to the 3 minute mark to hear it.

Ok the vocaloid pedal is awesome

I had this pedal, sold it a few years ago. funny but really useless.

I don’t even know how I would describe that. Compressed noisyflange overdrive? Haha, it’s awesome, even though not super useful, yeah.

by far one of, if not, the coolest pedal I have ever seen. How useful is it? defiantly not useful enough to justify cost and board space, but it is truly cool AF. If I were to buy one pedal, to not go on my board, just to have to break out for fun every now and again, this would be it.
Love that breaker design for the Hi / Low gain. The Igor hand switch, AWESOME.
Ahhh, if money were not object, and I already had my organs MM Stingray…

speaking of synth pedals.
Source Audio has a cool one. the C4 Synth Pedal

Again, Fun, but how useful??

This might not be crazy enough to fit the bill here, but I am leaning towards this, or one of the other 2 pedals that are basically the same pedal, just in different housings, with different names. 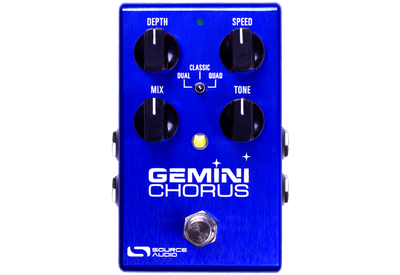 Out of the box, the Gemini offers tremendous tonal range, but beneath the hood resides a much deeper level of power and flexibility. Every pedal in the One Series line is compatible with the Neuro Mobile App (a free download for iOS and Android).

Because I am looking for a Chorus pedal, and have all but decided on the EHX Bass Clone, and was kicking around the idea of adding a Phaser (and was already looking at an New/ old stock Source Audio Soundblox 1 Phaser)
and because I have a fascination with Source Audio 1 series pedals and the Nuro App to create your own pedal within a pedal.
And because this Chorus pedal IS THE Phaser pedal, and IS THE Flanger pedal (not that I was looking for Flanger on my board, but Eh…), and because it is fully customizable, And because it looks cool, as well as the Lunar Phaser (which is the one I would get right now because it is in stock for Amazon Prime and the other two are not)

Anyway, I am thinking I will be trying this pedal, mostly for Chorus, but if I like it for chorus, then I am adding Phaser as well.

That might be a cool pedal. Phaser and flanger are somewhat similar modulations technically, so a combined one might be interesting.

It is a Chorus, Phaser and Flanger.
The Phaser and Flanger are pretty similar, but the Source Audio Series 1 pedal offerings for modulation are similar to their Drive / Distortion / Bass Distortion.
The LA Lady, The KingMaker and The Aftershock are interchangeable just like
The Gemeni Chorus, The Lunar Phaser and the Mercury Flanger.

and there are a lot of Multi Modulation pedals out there and some like the Joyo have dual circuit so you have two pedals and can stack effects. The Joyo looks fun, but you can only run parallel or in series A to B. there are other pedals doing this same thing, but you can run parallel or A to B or B to A, so if I were planning on one of those, I would probably get that option since both sides A and B do not have the exact same effects.

But, since Multi pedals don’t always do one modulation GREAT, sometimes only do it mediocre at best, but since the Source Audio, who does some amazing pedals, treat these as single pedals, built on the same technology, I think you can get a GREAT pedal that could also be another GREAT pedal, instead of just two mediocre versions of the modulation.

I downloaded and looked over the editor, and saw what you can do with the pedal and how fully editable they are, and it is almost certain that you can get an AWESOME Chorus pedal, as well as an AWESOME Phaser pedal.

Side Note, the C4 Synth and the Envelope Filter are almost identical. They are not, but close, so much of what you can do on one, you can do on the other. So, @itsratso, I would love to hear your thoughts on this, and have you tried to edit your Envelope filter, and if so, have you gotten any SYNTH out of it?

yep, they have a bunch of synth sounds in the video. and yes, i too have gotten probably more synth sounding noise out of it then envelope sounding, it does both great. that C4 pedal is another pedal that people rave about, i’m not a big enough fan of synth sounds to want to pay that much for one, even though i do like that bananana one above. if you’re a rush fan i have a sound programmed on the spectrum that sounds exactly like geddy’s synth line at the beginning of the song new world man.

now THIS i can get behind. looks great, sounds great Thing missing from the Sub n Up
1 octave voice

As @howard said before, which I kind of agree with, 2 octaves down on bass, even just a 4 string, is somewhat useless. I can say that sometimes that 1 octave down it a little too much, so with this you can godlike 5 or 7.
Also, the 2 octave up on the low strings, especially if you go to a 5 string or 6 string with low C, Hmmm. That could be really cool.

I know it would be tough to do, or hard to bring out on the pedal, but if they could go semitones between the 1 and 2 octaves, that could be a good thing. Possibly they could do it with a toggle, like a 4 way, so that when you have up / down, if it were up1 / up2 / down1 / down2 and then just have the nob go from unison to octave.
Maybe I have a pedal to design.

Although I like that brainwaves I do not think from what I’ve heard that you could make it Octaver-y. Maybe you can but I would hang on to the subnup until you try it. Edit: maybe you can, I never thought of it in terms of Octaver before and I guess it’s been a while since I heard it. but in those demo’s it does sound like one, I remembered it as sounding different. Oh and nice of the hamburglar to make an appearance at 8 minutes.