i`m learning this piece and struggle with shifting and speed

Is there any advice like “Hey play these bars not on fret 1-5, play it on fret x” or " for this bars you can use this shape x" .

It is very challenging for me to sight read and fret the right notes (because i can`t watch my fingers and look at the music)…Any advice is welcome! 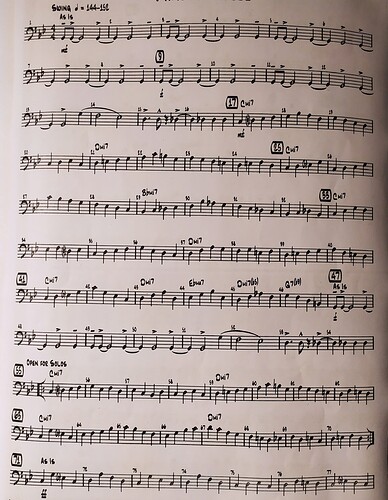 When you shift you look(if you have to look) at the destination not the transition. Look where you want to end up not where you are traveling.

Practice the transition til you don’t have to look and muscle memory takes over. When you learn the sheets you learn the notes and finger positions no time needed. Once you get that down then put on your metronome or start counting. Don’t learn the sheets and your time at the same time. Timing starts when you practice after you learn your notes.

Like racing you don’t learn your course while going at race speed, you memorized and work out all the kinks before gassing it up and push the limit.

Mark Smith at talkingbass has an entire multi-month/year course on sight reading (not looking/looking, etc)
This takes time, and a lot more than 11 weeks.
I have been playing sax for 10+ years and still sight read slowly.
Put this one in the ‘for the long haul’ camp.
What you can do is memorize/learn the parts just after the shift so you don’t have to look at the score, look at the bass and shift, and then memorize where to look back at.
But really, don’t sweat it, it will come.

Dennis,
It is pretty impressive that you are working on a chart like this after 11 weeks. Congrats!
Starting with some generalizations:
Shifting on a fretted instrument is more visual than something like the upright bass. I see most players glance at their hands at least occasionally.
Try to orient the music stand so that you can glance at your hand quickly then back to the music. A change in angle might help.
When shifting, stay in touch with the back of the neck or string if possible. Upright players are generally instructed to stay in touch with the string.
If you alternate between one finger per fret and the “Simandl” fingering (first, second and then ring and pinkie together), you can sort of crab walk around the fret board. For example, in this piece, begin with first finger on the third fret. That way your hand will cover the first sixteen bars without moving. In bar 18, close your hand so that the first note G is played with your fourth finger and open your hand so the next note Bb is played with your second finger. Then in bar 19, the fingering would be 4 1 open your hand 4 on Eb on the A string and back etc.
As much as possible, use a strategy of moving one finger to where another would be so that you can feel the “finger replacement”. In bar 55, I would be moving from my first finger on C on the A string to first finger on the D where my third finger would have been so that my fourth finger would be on the F on the A string. This would put the solo section mostly under my hand with my first finger on the fifth fret. With the exception of the B in bar 60 which can be “crabbed” to or pivoted to reach with my first finger on the G string.
Oddly enough, this sort of thing can be less hazardous with a fretless bass.
You can use your pencil to put brackets around sections that are all “in one position” as an upright player would say and to put some fingering numbers over the notes.
As you get to know the fingerboard better, you’ll find that you have some preferences based on feel and sound. The last line could all be played in that same first finger on fifth fret position but I would probably move back to first finger either on the second or third fret (alternating using open D string) because I like the sound of C on the A string better and it would eliminate the string crossing between C and G.
That’s a pretty long post for a lurker like me. Hope some of it makes sense and is useful.

Thank`s for all of your replys!

There was help in each answer, i take this into my practise:

The crab walk sounds smart to have some reference and are not totally guessing where the shift lands. I will practise this!

I’d probably play it like this, mostly in the first position, lots of opens strings are common for walking baselines and on upright bass, then you only have to move a few times. 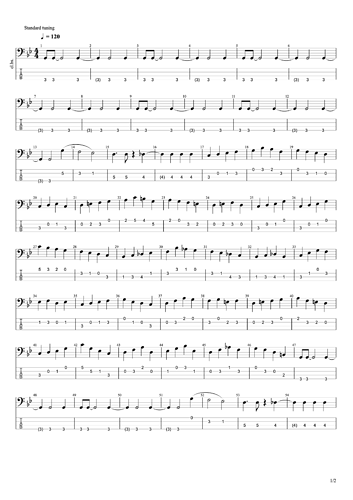 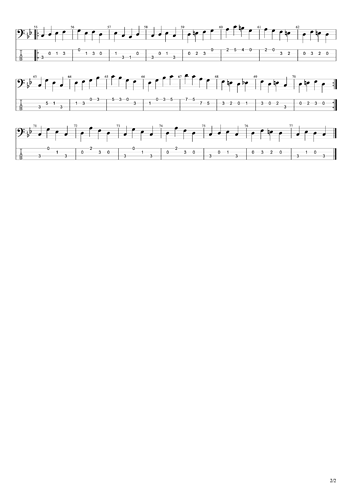