Boy do I feel dumb. I was tuning and tightened too much. Snap!

Completely my fault, new bass, different tuner arrangement. Well, off to Amazon. Where do you get your strings?

sweetwater. I like their filters. Also Amazon if I am looking for something specific.

Where do you get your strings?

Those are in fact in my drawer right now, pulled off of a BEAD 4, with an unused G

edit: oops, no, it was these. Another good option

Thanks for the help everyone. I ordered 2 sets of strings, so next time I will have a spare ready.

@howard how does it sound without the “g” string? I assume you went EADG using thicker guage

I tuned it BEAD and it sounds exactly like a 5 string. Except only the good parts

BEAD tuning is fun. Very easy to do on most 4-strings, just buy a 5-string set and put the lower four strings on. Maybe file the nut a bit if needed (I did).

This is a very common metal tuning. 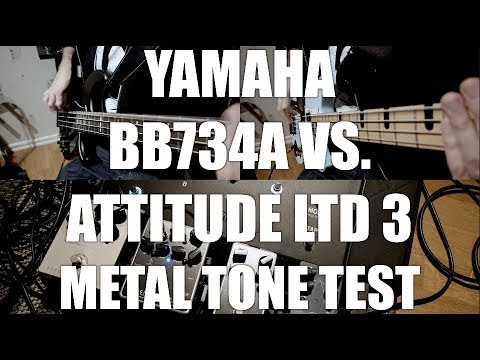 It’s even better for the bass; BEAD is lower tension than EADG.

Interesting. I wonder if I can get away without filing the nut; and I wonder how my Jazz would sound like this

pretty awesome I am guessing

Meh. Cheaper to buy the D’Addario 5-string set, plus .125 is super wimpy for a B. And you would still need to file, most likely.

Plus the D’Addario strings are probably better.

Probably want to look in to nut files too. I just used modeling files I had and was fine.

As @Gio started the idea, here is the alternate tuning thread ! it’s all about : What tuning are you using on your basses ? What is the goal and the way you use it ? Anything else about those alternate tuning

So I’ll start. I’m using the standard tuning (EADG) as well as Drop-D (DADG). I always change from one song to another. It’s pretty fast as there is only one string to tune, and with some habbit it litterally takes no more than a few seconds. I play a lot of dark rock/m…

Wow. I find it fascinating how many people buy from Amazon. If I can get it from a music store and it’s not that much more and I don’t need it urgently (unless they have next day shipping), then I will. I use Amazon when that isn’t the case. I just know that the more people shift business to Amazon, the more of these stores will cease to exist. And I’d hate to not have a local music store anymore. I’ve seen this happen a lot with hobby games stores as well. I’m not a die hard “fight the man” type of person or anything, but I do try where I can. Not telling anyone else what to do, just stating my process. If you want to keep going direct to Amazon in first instance, there is nothing wrong with that. I have almost daily deliveries from Amazon, but my stance with specialty stores is a bit different than bread and butter items.

Sometimes I buy from SoundHouse (Japan’s version of Sweetwater) but really that’s no different than Amazon.

I could buy from the online stores of the music chains here too but often they are the fulfillers in Amazon and Rakuten (basically, Japan’s other Amazon) anyway.

Sometimes I will go to the stores and have bought from them before (big ticket items, even, including two basses) but for strings, meh, Amazon is fine.

Yeah, and again, that’s perfectly cool. But I think people would be surprised to know how much music stores rely on non-instrument sales to keep themselves going. Not only is is the additional revenue and margin, but it keeps traffic coming to them.

Right, and volume keeps them in manufacturer discounts, etc. I will buy from a store if I need something and happen to be out near a store. But I don’t think I am going to make a trip to a store for just strings if I’m not already out.

Weirdly I probably would for picks though. I guess the differentiator is if I want to look at something, or know exactly what I want to order, for small items like these.

I’m off the beaten path, people don’t have exotic things like 5 string basses. heck they can’t even do a setup at my local store. I was in there this week (buying picks @howard) and didn’t see any strings for 5 string basses.

We are so rural here that literally a bald eagle flew past my window 15 feet away yesterday.

I could special order strings in but that would take some time. I’ll stop by and ask. But I did order from Amazon as I don’t want my bass down for days. Should get here Monday.

Meh. Cheaper to buy the D’Addario 5-string set, plus .125 is super wimpy for a B. And you would still need to file, most likely.

Plus the D’Addario strings are probably better…