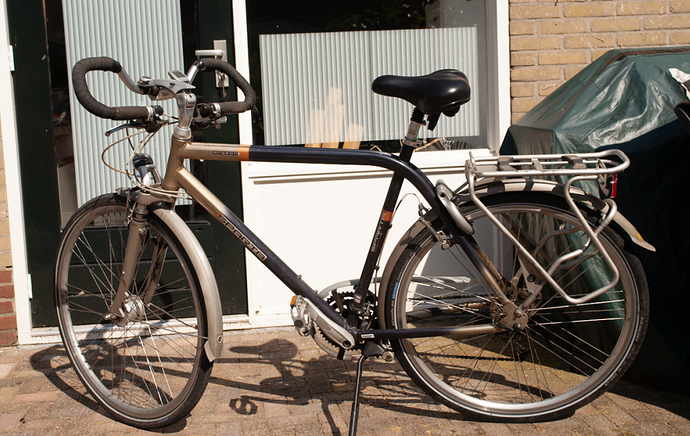 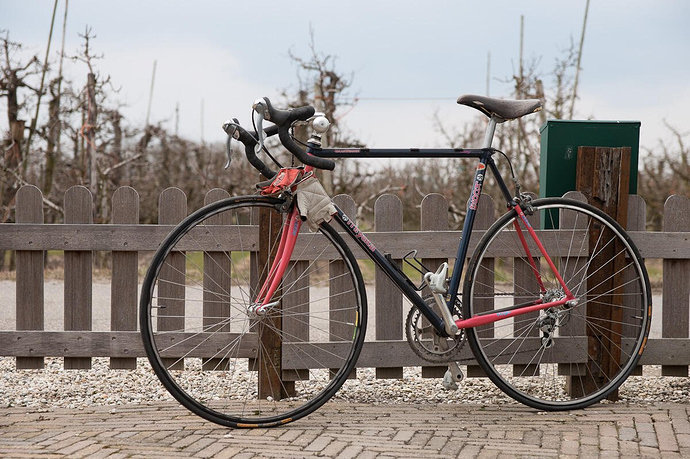 I have liked cycling ever since I learnt to ride a bicycle. I never had one for myself until I was 10 or so, but a girl about my age, who lived next door to us, always let me ride hers when I was six.

I’ve done quite a few bike vacation trips. The most epic one was to Britanny, which was 1200 miles round-trip, in a little under four weeks. With camping luggage.

These days are now behind me, of course. But I still do my shopping by bike, and it is my desire to have my next job within cycling distance.

Almost two years ago, my wife suffered a small cerebral stroke. This has hit her harder than we expected, and as a result, we decided to buy e-bikes. I didn’t feel like I needed one, but she did.
In retrospect, this was a good thing. When I came down with retroperitoneal fibrosis, this took a toll on my body… and on top of that, the treatment involves massive quantities of prednisone. This does not do wonders for your level of fitness – I have trouble climbing two flights of stairs. Add to that that the Prednisone made me gain 30+ pounds in 3 months, and it’s clear that cycling distances is not gonna be any easier. But the electrically assisted bike allows me to keep moving, which is better than forsaking it altogether and taking the car.

At this stage, a 10 mile trip on this e-bike is still… well, not a Herculean effort, but it does wear me out. It definitely qualifies as ‘good exercise’.

Being an engineer at heart, again, the technical side has always held my interest. As a teenager, I used to frequent a high-end racing bike shop in The Hague, where its owner showed me the ropes, and I ended up part-timing there when I was in school. I also ended up assembling my own bikes as well as bikes for my girlfriend, and later for my wife. 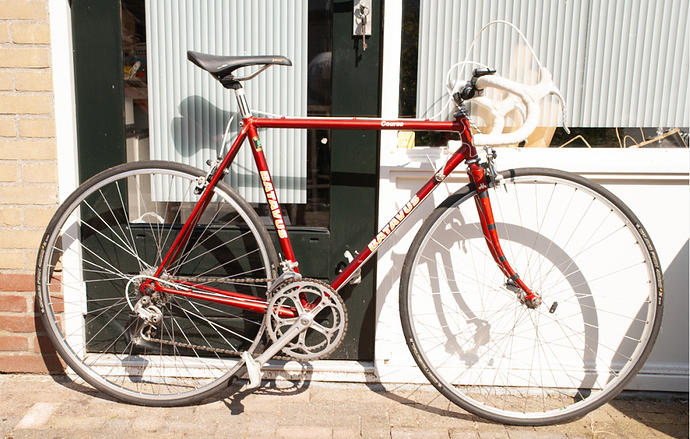 My wife’s bike had a lot of classic Dura-Ace stuff on it, but I have to admit that the more recent Ultegra group I used on my Koga bike pictured above was at least as good. I wanted to build a more modern bike for my wife too, but she didn’t want to hear about it – she liked the red Batavus too much. 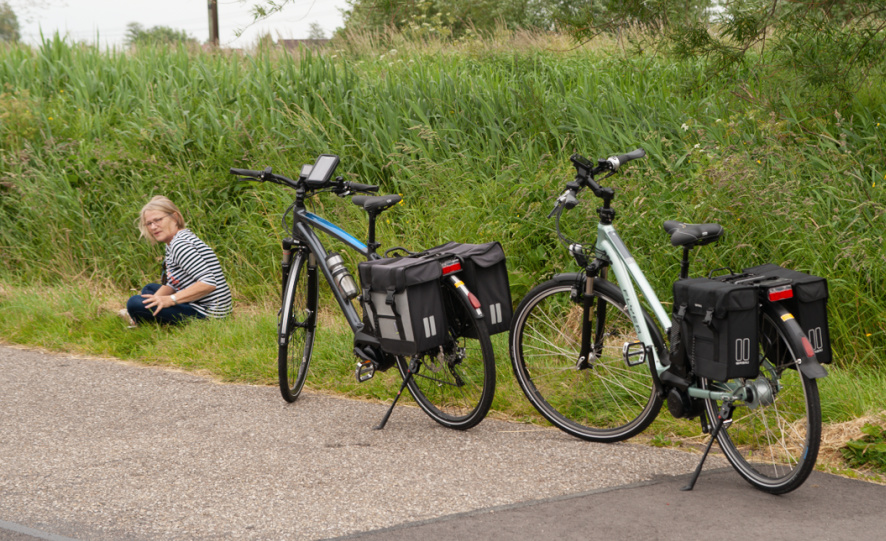 image886×541 333 KB
Our current e-bikes are Flyers. Flyer is a Swiss brand that doesn’t mind spending (and charing) a bit more money and effort on building a bike than most mainstream brands. Deore XT rather than standard Deore stuff, excellent disc brakes on mine and Magura hydraulic rim brakes on my wife’s bike, expensive saddles and handlebars, a brilliant Panasonic motor, a big fat battery that’ll take you 90 miles according to the manual, and the most expensive, hardest-to-penetrate tires Schalbe makes.

So… yes, even though we’re both in a condition that would have prevented us from enjoying cycling trips ten years ago, we still do so today.
And yes, I try to avoid taking the car to do my shopping whenever I can. If that means I have to make two trips to the supermarket, I work from the assumption that this gives me twice the cycling enjoyment.

Anyone else into bicycling?

@peterhuppertz, I used to be an avid cyclist when I was younger, and participated in the MS150 twice (Philadelphia to Ocean City).

I still bicycle today, but it’s a 40 lb. fat-tire beach cruiser, not a road bike like the one in your second picture.

Sadly, due to physical problems, I’ve not been able to get out as much as I’d like. My surgery has been delayed three times now, and nothing can be done until this lockdown is over. But my medical problems seem to pale in comparison to yours . . .

Hopefully, everything will work out for all of us

hell WTF why do we all have the same passions ? I love cycling and I have a lot of bikes (way too much) 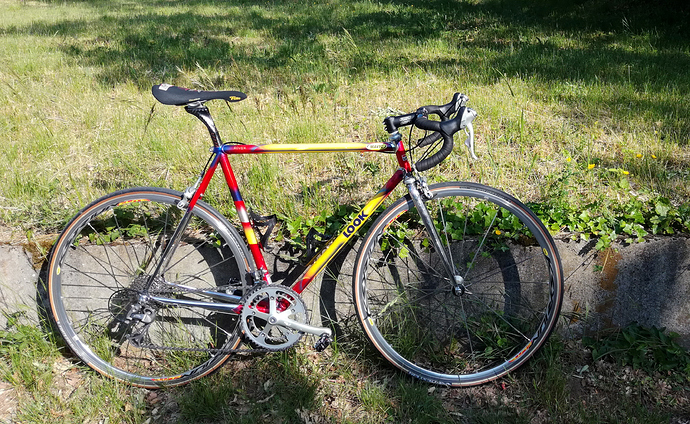 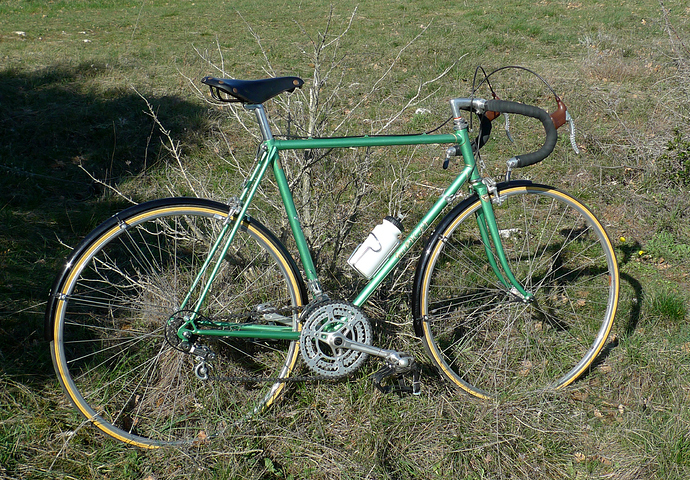 don’t know exactly how much I have … 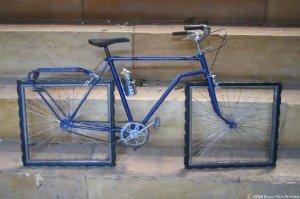 Wow there’s some wonderful thoroughbreds on here!!
I love cycling, but not on the roads - too many bad drivers for me.
Here’s my Specialized Rockhopper Pro Disc that I have mountain bike tyres, and also skinny tyres (as in pic) for.
I use it mainly for cycling along the canal network here, and occasionally put the fat tyres in, and go into the hills.
I’ve had it about 12 years and I love it.
It’s parking place is my obviously unused sitting room. 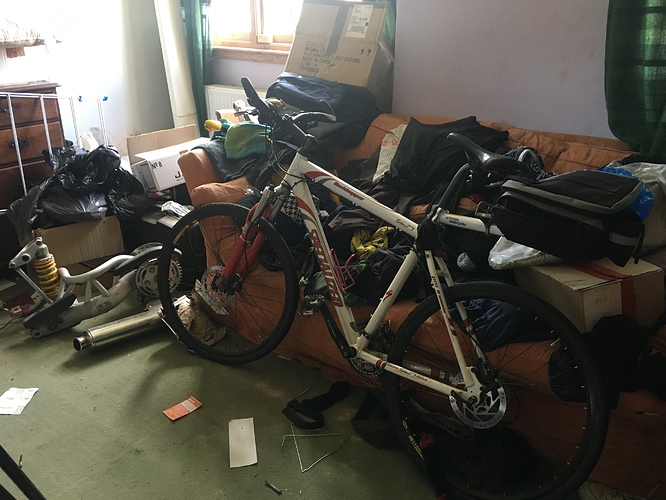 here is the one I use with my home trainer. very useful during a quarantine ! 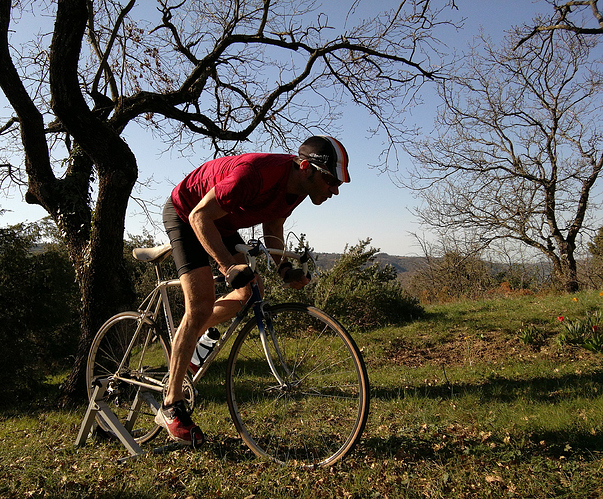 hell WTF why do we all have the same passions ?

this one is my utility bike, I use it everytime. it’s a 1987 Peugeot Aubisque, again a low-end french bike (same quality range as the Gitane). it’s simple and reliable, it just works. 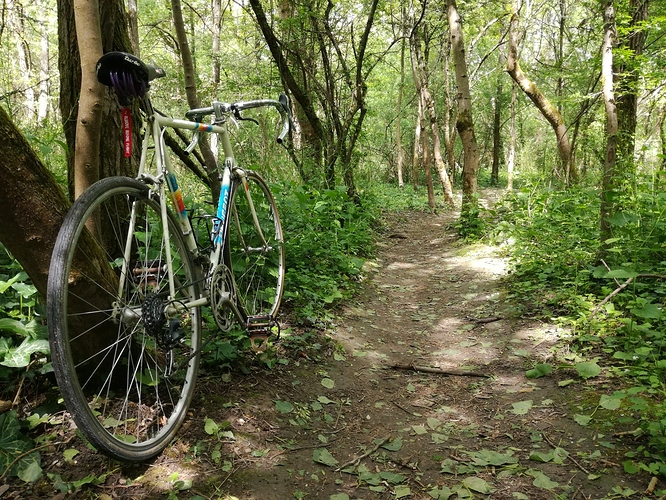 This is my 70’s G&S Fibreflex with Gullwing HPG IV trucks and BB Superboot wheels. I have another couple of 70’s boards as well. Another G&S Fibreflex deck with Gullwings and original Green Kryptonics, and a Sims wooden deck with Trakker Trucks and Hobie Bowlrider wheels. I’ve also been known to surf, windsurf, waterski, and snowboard. I’m considering a kiteboarding holiday with tuition early next year.
Oh and I have a sax. I did start learning to play it years ago, but the octave lever (or whatever it’s called) is broken and I’ve never got round to getting it fixed, and it got frustrating with it non functional. 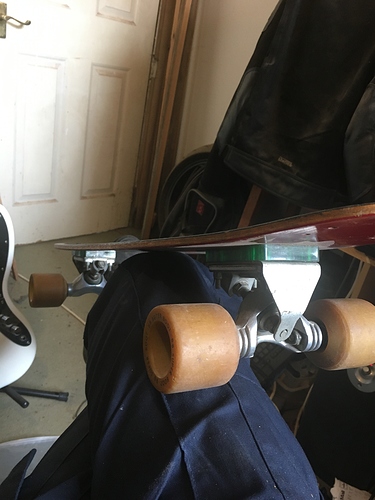 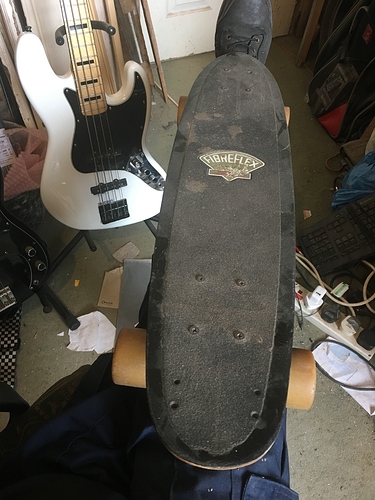 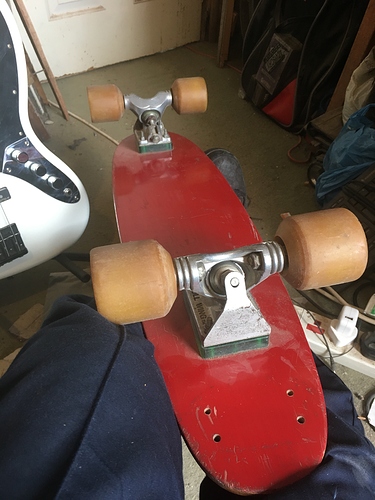 this one is my utility bike, I use it everytime. it’s a 1987 Peugeot Aubisque

Wow that’s really cool.
I had a Peugeot, and I loved it. Unfortunately it got written off in a drunken ride home from an all night drinking session.
Not sure if it was 70’s or 80’s but it looked exactly like this - same colour seat and everything. 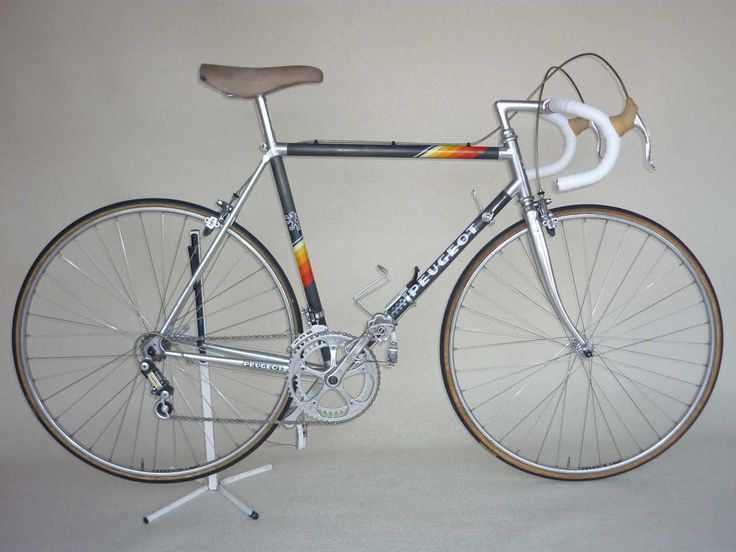 most likely the very end of the 80’s or even the beginning of the 90’s. the one you show has glued tubes over aluminum parts. it was the very beginning of aluminum and carbon frames. I had a Giant with a very similar construction but this one had all-carbon tubes : 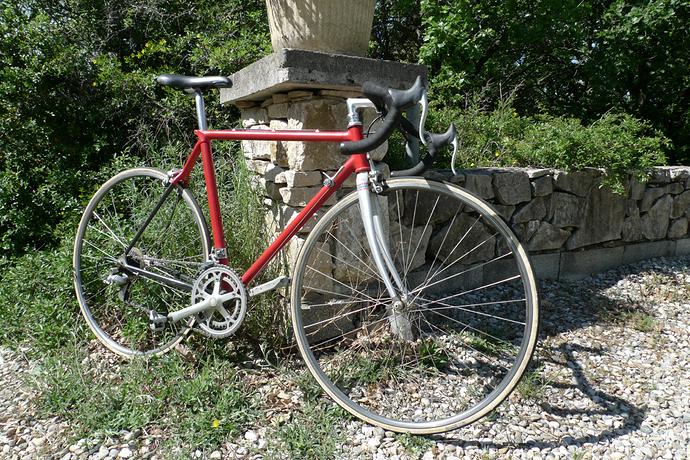 sold it a few years ago because I much prefer steel frames.

@Mark_D and @studio, you both are definitely multi-talented . . .

@terb, have you ever attended any of the Tour de France races?

most likely the very end of the 80’s or even the beginning of the 90’s. the one you show has glued tubes over aluminum parts. it was the very beginning of aluminum and carbon frames.

No I think I got it wrong Terb - it wasn’t that modern. I just noticed the silver forks and the silver rear frame part (whatever it’s called) on mine it was the same blue as the main part of the frame, and it was steel. It was a lot bigger than the one in the pic I posted as well. A really huge frame. It was a fantastic bike and I loved it.

have you ever attended any of the Tour de France races

no, never. I don’t really watch the races, I find it’s a bit boring when you’re not on the bike

but sometimes I watch a race while biking on the home trainer, I did this last week and it was funny !

probably a high-end model ! it was probably chromed steel with the middle part of frame painted (exactly like my Look), and not aluminum.

@jazzbass19
Either that or we never stick to anything

No I mean mine didn’t have those silver bits.
It was more like this, but with the white seat same as the other pic I posted.
This one’s called a Peugeot Aubisque. 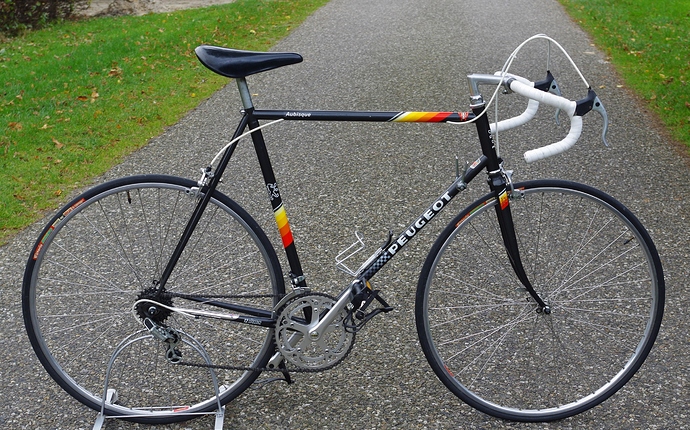 @Mark_D and @studio, you both are definitely multi-talented . . .

You’re too good to us Joe

Either that or we never stick to anything

I bought my skateboards in the mid to late 1970’s and still have and use them.
How long until I qualify?