Upgrading to my 2nd bass after only 2 weeks!

Hi guys! my name is Nico, I have been curious about bass since like a year or so (watching a lot of davie504 videos and its soo coool!)
I suddenly found some video or something on my social media and it just clicked, I was spontaneous and check my local craigslist, I bought the most “decent gear” I found, I did pretty much no research about gear and I got for 200USD a buzzing 15W guitar amp and a “Smash Swing” guitar, I figured as long as it looks good, a tuning and maybe new strings may do the trick (however I spent the first 3 days on setting it up!) for my surprise the neck angle was off, the strings were not properly stretch, the 8ave didnt sound like an octave, the action was extremely high too!
After all the setting and finding from beginner to badass just realized some frets just doesnt give me the right notes (gods knows why)

So at this point and so hooked with bass I decided better do the move sooner than later!
so I am going for a safe option (Yamaha TRBX304!) next month I would get a decent amp but I really wanted to have a nice guitar.

I know maybe its kind of like too much for some people buying a new bass only after 2 weeks in and with a totally playable 2nd hand one (altho I have no point of reference), the bass I have (despite mysteriously missing some notes in the lower frets) its very playable and so, but I guess I am that kind of guy that feels good and mentally supported when having a good gear.

I will see later on but with a TRBX304 I should have no ceiling and being a good brand I can guarantee I can fix a problem if something happens. It already happened to me on many other hobbies that when you pick cheap you learn and pay again haha, but when you go for a decent quality straight from the beginning the process its a enjoyable walk in the park 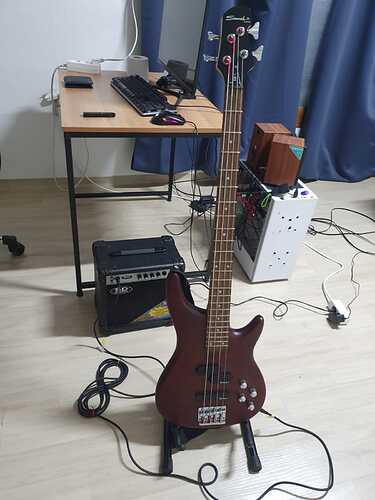 Good choice, the TRBX is an excellent bass.

Thanks! hopefully it will last me years!

Learning bass on a decent instrument is a good start. Yamaha is solid choice!

Welcome @Nico . good to see you here. You got the gas early, be ready for a Ride.

@Nico, many BassBuzzers have bought one or more basses since signing up for the course. It’s pretty common, actually. It’s all about learning which style of neck/body and even scale works best for you. Best of luck and, most importantly, have fun!

Maybe the intonation is off? Or maybe it’s just a crappy bass

Well I checked the intonation,… on the lower frets sometimes I play the f and then the f# but they both give me the f# note,… checked the height and everything so… dont wanna bother much more hehe

Welcome @Nico
I did the same upgrading from a $150 Chinese bass to an Ibanez in 2 weeks.
Enjoy your Yamaha. They are something I have been browsing on eBay recently!

The only issue is @Nico I’m a really slow learner

well as long as you learn! not even learn just enjoying it,…
Personally I can tell the first steps are the most enjoyable ones, the more you progress the harder to impress yourself, to have fun, you will be more challenged and it stops getting fun personally, It happens to me every time, but maybe its just me, but maybe its just me

Oh yes, personal disappointment is a hard one

I too did the buy a cheap bass and fix it plan. I upgraded after a month to an Ibanez es300. Bright side is i learned a lot in that month. Bass electronics repair and grounding, bridge replacement,fret filling, truss rod adjustment, etc.

side is i learned a l

yeah thats 100% true, would not dare to do all of that in a new, nice looking, totally working bass heheh

To borrow gaming terms, bass had a low skill floor, but an extremely high skill ceiling so it should keep you learning and expanding for some time.

I will see later on but with a TRBX304 I should have no ceiling and being a good brand I can guarantee I can fix a problem if something happens.

First off, welcome to the low end.

I had the same issue when I started Bass at the beginning of 2021 except I started with the 304 but upgraded within a couple of weeks to the 504. I suggest that you seriously consider the upgraded pickups and electronics in the 504. For the extra money you get so much more and it would cost you more to upgrade the 304 than it is worth. With the 504 I will probably never live up to the full potential of the Bass. I have nothing but good things to say about Yamaha and own a few of their acoustic instruments.

This is so subjective to individual tastes and usage requirements.

Bottom line is as long as you are happy with what you have gear wise that’s all that really matters.

Thanks! I just saw a few post that they wanted to upgrade the 304 with a passive active switch and discussing about getting the 304 or the 504 or 604.
I already got my 304 and very happy with being in a decent low end of the spectrum, the neck and the strings are smooth with a great feeling, its easy to navigate and make notes clear, no weird buzz or anything, I personally as a noob think 304 its fine for me since I am not even sure how long I will stick with bass, I stick with piano for 1/2 years and compared to my cheap unknown brand bass it just feels great. Not even sure if I wanted an active instrument in the first place since I just care about playability and have no idea about tones and EQ so far, maybe later on, but so far I really need to make it sound nice! hehe

So as I already go my 304 I just wanna focus in playing hehe,… but of course I know the next thing to look for is a decent amp.

Thanks for all your insights, I will definetly keep in mind the rumble 500