First I’d like to start with something just to put things in perspective. Before I was a “veteran bass player” I wasn’t. I was a guy, uncertain of his skill level (this still applies actually) who had Next to no experience playing with others, writing songs, playing covers and ZERO experience performing music in front of anyone. So just because I have done that now, and recorded an original album, doesn’t put me far away from when I hadn’t done any of it. So take “veteran” with a grain of salt…I simply threw myself at music with no plan and eventually came out the other side.

That said, any questions or concerns or general advice I can provide I will to the best of my knowledge and within the realm of my experience. I don’t think it will be just me. There are lots of people here with different experience levels, some with WAY more than me. So anyone like that please weigh in and give advice, I may ask some myself!

Will get the first bit going below in comments!

I’d say FIRST try and figure out your musical goals, BUT, and this is important, be honest about it and free from shame or doubt. Thoughts like, “but I could never do that” or “I don’t want to be in the spotlight” along with “what if I suck” or “what if I make a mistake”…just throw that all out! That is called “stinky thinking” and none of it will help you, instead it will get in the way of what you truly want to do in your heart.

Back to it though, think about what you want to do. WOULD it be cool to you to perform something live? Think about it going perfectly. Do you see that as something you want? IF the answer is yes, then set it as a goal. If not, that is totally ok too, exclude it from your goals.

Why is that important? Alignment with others. 4 of our band members wanted to play live, one didn’t. He left the band and was an AMAZING lead guitarist. But his goals and desires for music didn’t match ours. So it didn’t work. This applies across the board. Find musicians with the same goals. If you want to make original music, you probably shouldn’t join a cover band. If you don’t want to play live, don’t join a band that wants to gig. If you just want to play for fun, don’t join a band that wants to record an album and go on tour. If you want to play Rock music, don’t join a Ska or Psychobilly band. All this sounds obvious, but you’d be surprised how much of an issue these things are in bands.

TL:DR Find other people to play with who have the same goals musically.

TL:DR Find other people to play with who have the same goals musically.

To which I will add: Things won’t be perfect, ever, and there will be drama and tension. It might take a while to come out, but it will be there. And that’s ok. Just don’t let it ruin things when it comes, just roll with it.

Very good and true point. I got stories, and I can’t say the road wasn’t SUPER bumpy at times. That said, it was BECAUSE of the common ground we found that we moved forward.

Thank you for starting this MUCH NEEDED topic.

I have spent decades kicking myself for misbehaving and getting myself kicked out of the high school band (read my profile). I had rhythm, I could have been a good drummer, I could have become a musician; if only I didn’t have such a b*tchy attitude. If only I hadn’t tossed my music book out of that third story window. But I digress…

Now I’m a young lady stuck in the body of an old lady. I have turned back the clock and am picking up where I left off that fateful day, but with a better attitude and an understanding of the importance or music theory. I can play bass now. I yearn for that moment that I can play with a group of musicians and fulfill my dream. I want to bring the joy of music to others, just as so many musicians have brought it to me as I watched and listened in awe, all the while regretting that I wasn’t up on that stage.
Now that I know I can contribute with my bass guitar, I want the chance to fulfill this dream. Maybe its a bucket list thing, I don’t know.
I’m petrified though. What if they think I’m too old? What if I stumble and bumble at the first meeting and forget how to play? I don’t even know HOW to play in a band. So much of it is a mystery to me.
This is why I’m so fearful to put myself out there as a bass player. This is why this topic is important to me.

Putting yourself out there is really hard! Maybe the hardest part. But you’re doing the right thing. And you’ve got the skills for it. What you are doing is actually harder than what I did; my core bandmates were my two best friends, and some other friends that came and went from the band, so there was no awkward “getting to know” phase.

To keep it from being too terribly daunting, look at it as a series of steps. Your first goal is to just meet people and jam with the band. Just keep that thought. You’re just very cool people hanging out and jamming, no strings attached, no big scary live crowd to worry about.

Then let nature take its course. It will either click or it won’t. If it doesn’t, it’s fine. Try again.

It’s not skills that make the biggest difference there, ironically. We had the chance to have a very good drummer join us, similar music tastes, great guy too. But it just didn’t work. We just didn’t click together as a set. It happens. He went on to a more successful band too

I feel ya! This kind of goes into just philosophy. The only time you actually fail at something is when you decide to stop trying. I’ll give other advice later, as preparation is still always beneficial. But, let’s say the worst happens. You try out for a band (there are different routes though, but just hypothetical) and you mess up and they don’t pick you as the bassist. Does it suck? For sure. BUT what did you get out of it? You learn from it. What did you do wrong? What can you improve on? You have to paths from there: you can be discouraged and give up, or you can use it to forge a path of improvement so it won’t happen next time!

Colonel Sanders had his idea for a chicken restaurant rejected (sometimes laughed at) around 100 times. Today, well KFC is KFC!

That said there are lots of things you can do that also aren’t just “auditioning”, as well as lots you can do to prep yourself for getting where you want to. There are MULTIPLE paths to your goal.

There are MULTIPLE paths to your goal.

This is the reason I developed and maintain my site www.pampurrs.com where I post all my covers and basslines that I have created. My hope is that someone stumbles upon it and says, “hey this chick can play bass, let’s contact her” (sort of like sitting demurely at the bar waiting for the right person to come along).

That’s a path, and nothing wrong with it. I’d liken it, though, to having a REALLY GOOD resume that you don’t send to any potential employers.

That said applying for a band is only one way to achieve your goal. I will list some in a bit.

Alright, as promised here are some avenues you can take that can get you into a band, or at least with other musicians.

approaching this as a leisure activity as opposed to “this is how I make a living”. I would say tolerate no drama. Trust your instincts, if you think a band member is an asshole then he probably is and if everyone else is cool with the behavior, walk. Who needs that frustration. Played in a band with a singer that it got so bad I wouldn’t swerve to miss this guy in the street. Twenty years later I’m pissed this guy is breathing. I will take friendly and reliable over experienced and talented every single time.

This is nowhere near an exhaustive list. Get creative too! Think of ways you can play with some other people. The path to playing live isn’t “we are gonna play a show in a week!” It was THREE years of me playing in my band before we played a show.

Totally. Find people who are easy going. Its ok to have someone who pushes you forward, but know the difference between that and an asshole. LOL. Our singer pushed us to playing that first show, and I am SO GLAD he did!

Yeah, if someone is an asshole, no reason to put up with it.

I was talking about more minor dramas and tensions. They just happen. You’re making music, a creative and emotive process where people each have their own voice. Sometimes those rub a bit.

And you just roll with that and don’t let it blow up.

And then there’s the external drama. This is actually what ended up pulling us apart at the time. Life-shaped, and being 19-22, usually girl-shaped drama. In retrospect we would have been much better served by sticking more with the band. But all the little things that tugged kind of added up and resulted in friction - missed practices, etc. And eventually it just kind of ended.

Basically, yet another case of “you’ll get out of it what you put in to it.” Funny how those keep turning up.

The hard part is finding people equally committed as you are. I admittedly lucked out, in that a corps of three of us, and then finally the 4th (3rd guitarist) were very committed to making it happen. Also three of us are married already with kids, which does provide its own challenges, but also keeps the relationship drama out of the band well.

I will add one. Online collaboration. There are probably some other ones, but the Spire app if you have an iPhone allows you to download and record a separate track to one other people make, and it records it right with your phone mic. All you need is headphones, your phone and the app.

Send me a riff from spire, I’ll see if I can do something to it. My ear isn’t great so a basic chord progression and key would be useful information to speed up my recording/creation

Hmm…way i did it is like this. There is a share button on the file in the app, within the song or if you swipe left on the file.

So here is a file from it. If you click on the link it will give you option to “open in spire” on a drop down menu. 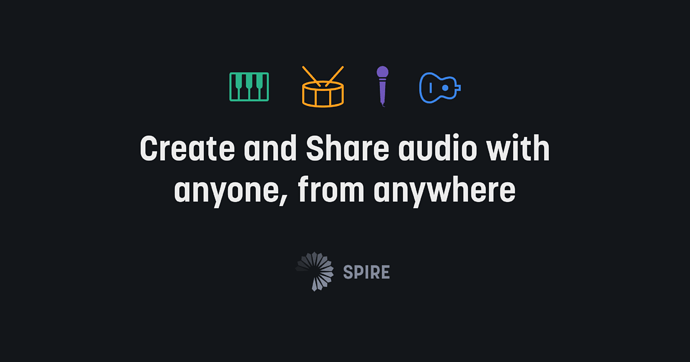 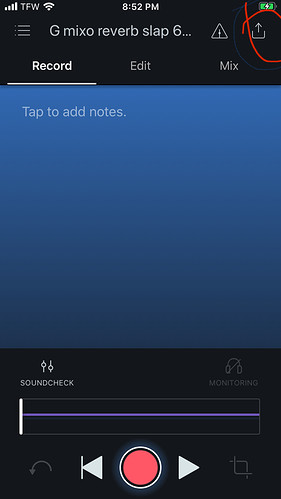 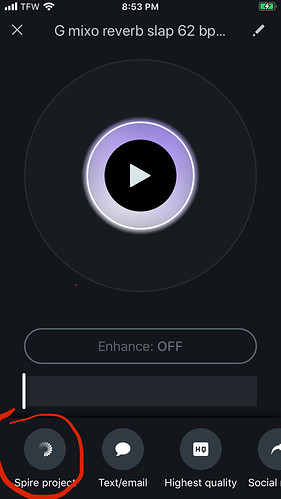 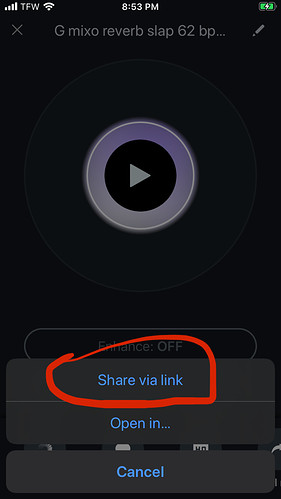 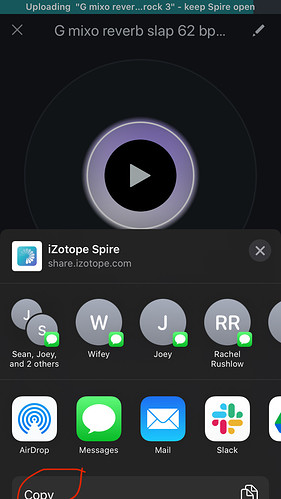 Then just paste the link, I can open it from there. If you wanna record over the track above that would be cool as a trial run too. That one is in D Major I believe.