What games are you playing on your phone or tablets?

My daily games are DomiNations, angry birds 2 and BaseballClash.

I’ve been playing DomiNations since the first month they came out. If anyone plays I’d love you guys to join my team, lol.

I’ve been playing Mech Arena. It’s a good game but, man, they must have brought on addiction theory specialists when designing this game.

Crossword puzzles and an app called Cross Me (nonograms, I’ve done hundreds if not thousands) - gotta keep the bean keen.

I don’t do mobile games any more (despite having worked on some). PC for me. But in the past I really loved the iOS version of Carcassonne - it’s basically perfect. 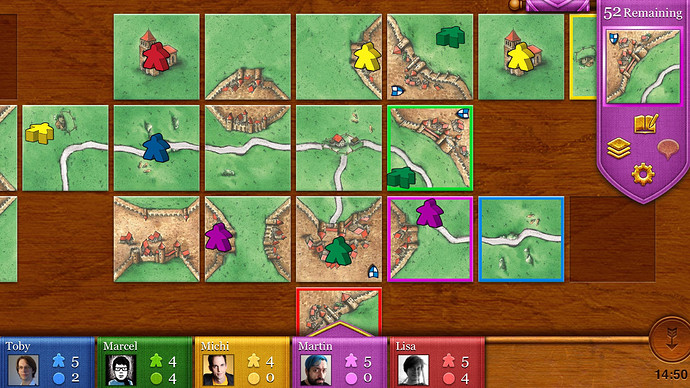 My brother has been telling me to start PUBG but I don’t know if I can block 20-25 minutes each time. I do like the look of the game.

I don’t do any mobile games. Strictly PC or PS4

Empires and Puzzles. Just something to kill some time.
Chess with the Chess.com app. Be happy to play anyone, but I don’t promise to be much of a challenge.

I was a long time player of Empires and Puzzles but recently stopped playing due to the increased move towards pay to play tactics.
Before if you spent time on it you could play at a reasonable level but now can’t even maintain that level without parting with money.
I have started playing Bladebound but really just waiting for Diablo Immortal

Yeah, I’m not a “pay” player, yet they don’t have any ads other than the ads for all the ways to spend money on the app. I’m sure that I won’t play for super-long, but for now it’s a boredom-killer.

I just play Solitaire on my computer . . .

None on my tablet but on my laptop I am playing Gloomhaven.

I second that but also play Microsoft Treasure Hunt but only on my PC.

All three of the Deuski Games’ “idle timers”

They are very simple and some might not even call them games, hardly. Basically resources accrue, even if you are not “playing” and you use those to buy levels in different “stats” that increase the amount of resources earned, and boost multipliers. You can play 30 second adds to double production for one hour and they usually stack to 12h (I charge them up while doing other things).

After a while you can kill it all off, and start with a bonus to production to get further, faster, the next time. I like this person’s games because there’s usually some sort of story that unfolds at various milestones.

There’s a lot of games like this, but most of them feel very “freemium” to me; Deuski just has the optional adds and no in-app purchases to make, which I appreciate.

So really they aren’t super time wasters, I just pick them up occasionally and tap out some resource boosts and put it away, or kill the universe and there’s a rapid period of boosting until it slows down a bit. The most recent one does have a match-game component where you build better and better batteries, have to balance production with available power, and you can customize how the reboots work, so it’s a bit more “game-like” in that respect.

The cool thing about matchup games nowadays is the fact that you are playing life against another player all the way across the globe. Different cultures play the same game differently. I kinda like it.