What's the deal with effects and pedals? (Also: sound in general)

@JoshFossgreen It looks like you have your tuner pedal last in your chain. If so, why is that?

Haha, with all the crazy stuff that has happened between when I posted this and now, I had all but forgotten about this one

It looks like you have your tuner pedal last in your chain. If so, why is that?

It’s not the only way to go, but I like to keep the tuner at the end as a killswitch, in case any pedals get out of hand and I need to emergency mute.

@JoshFossgreen That makes sense. Do the other pedals affect the accuracy of the tuner? Do you have to turn them them off when you tune?

in case any pedals get out of hand and I need to emergency mute.

Hey @JoshFossgreen I put my Polytune at the beginning of the chain and can mute by switching it on. There is no sound when the tuner is on.
Does your tuner not work that way?

here is my little graveyard of effects that I never use : 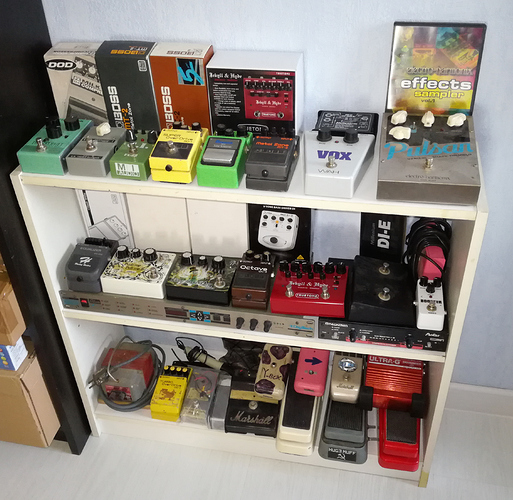 Seeing the TS-9 there makes me sad

maybe I’ll find it a use in the future … still a really good sounding overdrive with guitars. it’s an old japanese one, with the original JRC 4558D, which makes a huge difference compared to the current TS9.

I put my Polytune at the beginning of the chain and can mute by switching it on. There is no sound when the tuner is on.

I mean emergency mute the other pedals, like if a delay gets out of control oscillating into doom, or something. Either spot will mute the bass since the tuner is between the bass and the amp either way.

so … I think I’m very officially collecting vintage Line 6 bass dedicated preamps. yeah that’s kinda precise. in fact this collection might end up pretty fast because, as far as I know, there has been only 5 of those bass dedicated preamps (very end of the 90’s / early 2000’s), and I already own 3 :

that’s it, I just managed to get a Bass Floor POD, which is by far the more rare of those five preamps, at least here in France. I got it for the decent price of 100€ , which is in fact pretty expensive considering that it’s the lowest in the range. Plastic construction, only 6 models, but it’s the only one in pedal format and the models are not the same as the ones on the other Bass PODs : in fact the Bass Floor POD is the preamp section of the (discontinued) LowDown amp series, in a pedal format. It’s more made for live use and way less for studio than the other PODs. 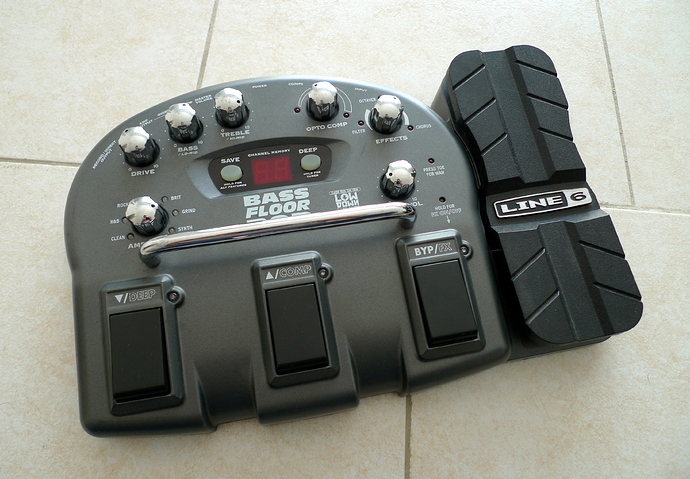 those things are really not easy to find, I’m pretty happy I finally have one !

… I forgot a 6th preamp in the list : the Bass POD XT Live, which is a big pedalboard. 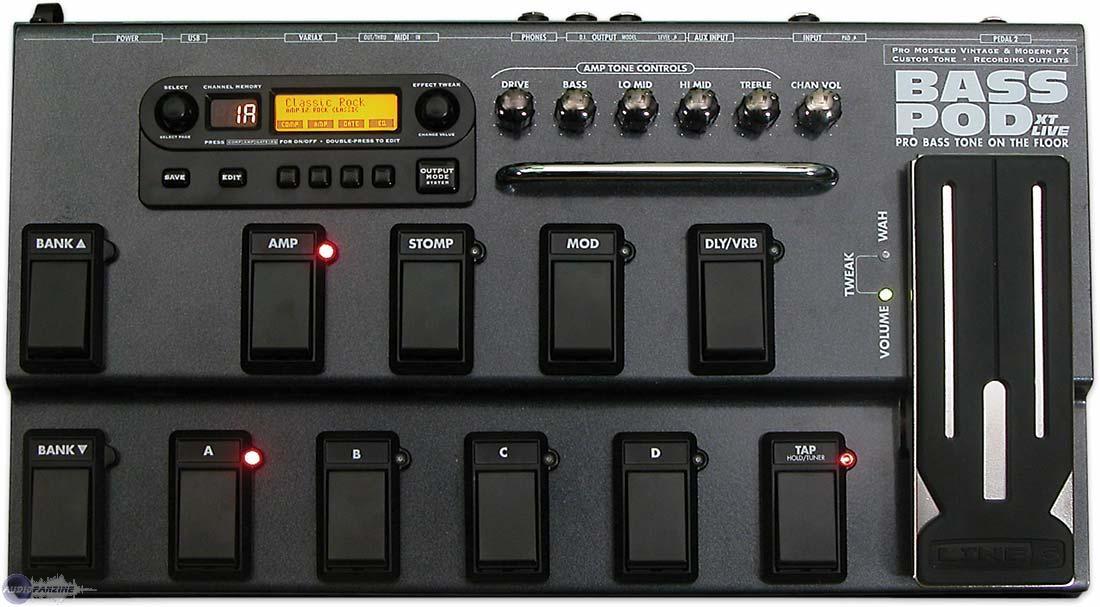 probably the least interesting in my opinion. but, if I see one for a good price …

so, here are my first impression about the Bass Floor POD. first difference with the other POD (Desktop/Bean or Pro/Rack) : this thing is not built like a tank. it’s made of plastic and not metal. It has only 5 amp models when even the first Bass POD had 16. there are very few settings, and the features are very limited compared to the other PODs, for example you can’t change the cabinet, you stick with the default one for each amp model, without any possibility to set anything else.

also there are only 3 effects (enveloppe filter, octaver, chorus) and you can have only one at a time. there is a compressor which is not considered like an effect, which is not transparent at all but sounds pretty good, at least on a low setting.

well it’s really made for live use, and everything is kept really minimal and simple, even compared to the first POD range.

the fun thing is that it sounds pretty different than the other POD, in fact each POD has really its own sound which is very counter-intuitive for digital modeling. and that’s exactly the reason why I want them all

two other models are very interesting to me : the Eden Traveller (excellent modern clean tone ; you know I like Eden products for this) and the mighty Ampeg B15 (vintage tone with a nice character in the midrange).

there is also a model of the Marshall Super Bass (bass version from the well known Plexi era) but I don’t like this amp for bass.

the 5th model is unique to the LowDown series : it’s a SansAmp PSA-1 plugged into an Ampeg SVT. the model is named “grind” and, yeah, that’s exactly the right word.

there is a 6th model which is not an amp but a synthesizer ! and then all the controls change to synth controls (resonnance, cutoff …). I didn’t tried this synth much but from my very first tests, it sounds really good.

last but not least : the Bass Floor POD is a perfect fit with the front pocket of my gigbag, and the device is not too heavy thanks to the plastic case …

a few bad points now : about the digital-to-analog converters, the quality is clearly lower than what I have on the PODs, especially the POD Pro, which is pretty normal. also there is an expression pedal but for me it’s useless, I would have prefer a more compact device without this pedal. also the EQ has 2 buttons with 2 modes : bass/treble and low-mid/high-mid ; I don’t like having to switch from one mode to another when I’m EQing. also the way to activate the tuner is pretty stupid for a live-oriented gear, it’s not really useable in real live.

well, I can live with those few bad points.

I think I really like this ugly little plastic pedalboard.

just showing you a very rare Vox vintage autowah enveloppe filter pedal, about 40 years old. I took some pictures because I’m selling it.

the reference is 1904 and it was made by Guyatone. it was strictly identical to the Guyatone PS-104 Cross Over Box Auto Wah (same PCB), only the box was different. 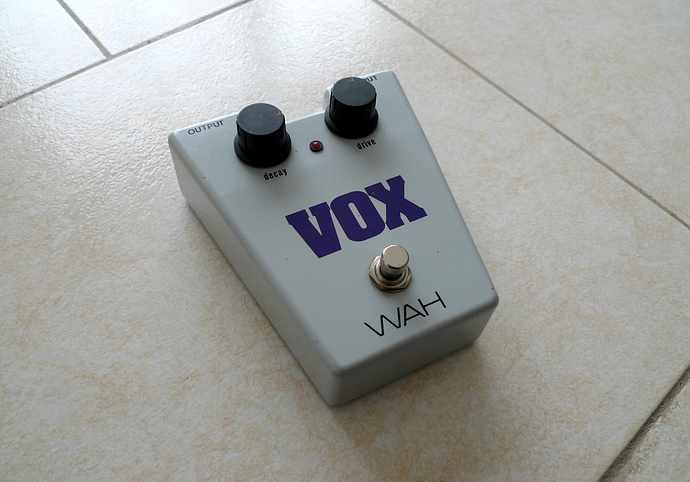 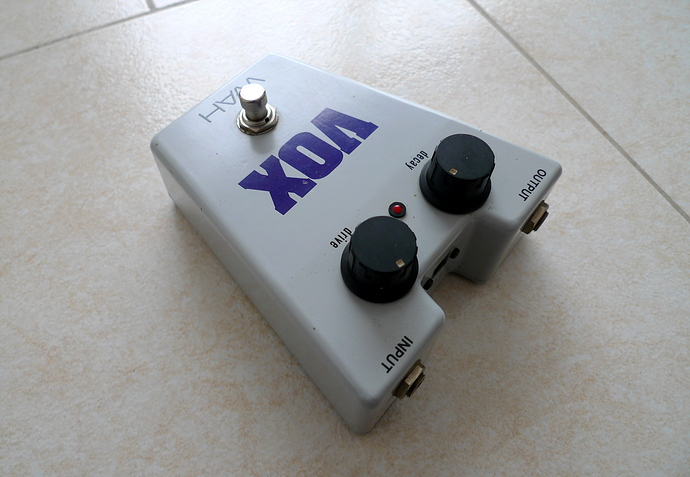 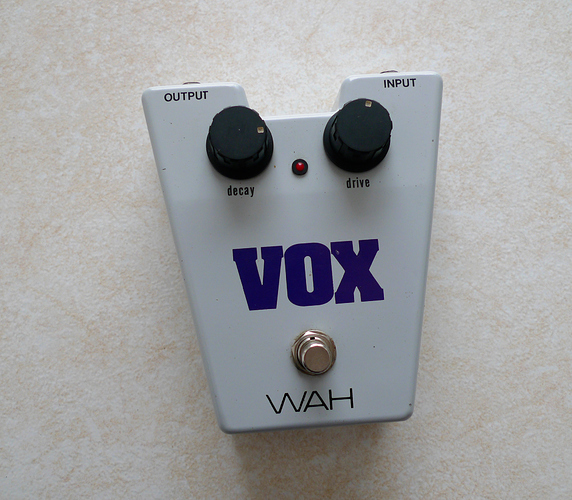 hey look what arrived today ! one of the MusicDing kit we talked about with @howard . this is nothing less than the preamp of a Gallien Krueger 400RB. can’t wait to solder and plug it ! 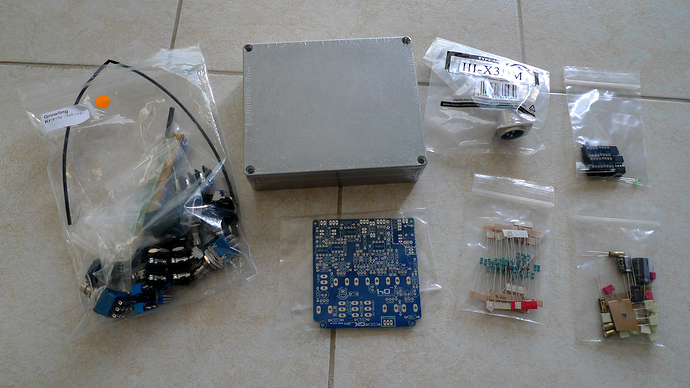 nice one, but IC Sockets?

I would prefer socketed myself, but that’s because I suck at SMD soldering and it’s much harder to screw up a socket than an IC.

That board looks all drilled-through which is nice but same thing holds, soldering in sockets is much less stressful for me