Yamaha TRBX not cutting it for me

Ever since I got my BB, I’ve been playing it almost exclusively. When I do pull out the TRBX (usually to play something in D), I find its tone to be rather unsatisfying; it lacks the punch and heft of the BB. They’re both strung with the same type of strings (Curt Mangan), and of course I’ve played with the EQ and pickup balance to try to get a more satisfying tone.

So, I guess I want to sell off my TRBX and get a different 4-string. Part of me wants to get a BB734a, the 4-string equivalent of my 5-string, but then I’d basically have two of the same bass.

Note that I don’t want a Fender or Squier. The reason: Everyone has them. I want something a little different.

An important information would be: what is your budget?

Cort A4? Those Fishman Fluence soapbar pickups are supposed to pack quite a punch. Only a two-band EQ though.

Probably $1k or less. Still a noob, though I do appreciate a nice instrument!

Yes, as mentioned, Cort A4, a Sire Marcus Miller, or perhaps an ESP LTD B4-E. There is probably also an Ibanez that would fit the bill, probably from the SR series…

I also traded in my TBRX604 when it didn’t do it for me. I picked up a Ibanez SR650e which is similar size and active/passive eq setup to the TRBX. I LOVE my Ibanez. Doesn’t mean it will feel right in your hands, but for me it scratches the itch that the Yamaha didn’t. 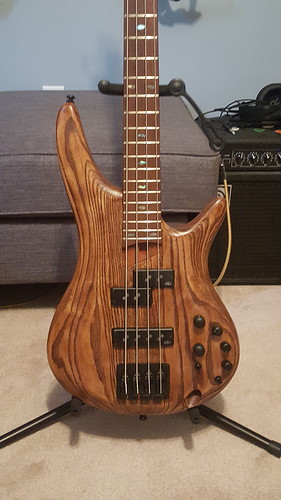 I love my BB735. What strings do you play on it? I play black nylon tape wounds and they sound awesome.

Currently I’m using Curt Mangan nickel-wound strings. My cousin got me a pack of Elixirs I haven’t yet put on that I’m anxious to try! The bass came with D’Addario XL, which I liked as well.

The TRBX is definitely going to give you a more modern brighter tone than a single/split coil P/J bass. I actually prefer it and can get the deeper tones when I want them pretty easily via effects, but if you’re looking for a Motown bass, yeah you probably want to look past the TRBX.

Yeah those are super nice, I really love the whole SR line. That would be a good choice if you like the feel of the TRBX but want a more P/J kind of tone. I hear those pickups are awesome.

The TRBX has amazing pickups too in my experience but it is definitely a brighter bass.

BTW, you can get the TRBX to be pretty thick and punchy as well. This is the isolated bass track of a cover we’re working on. Basically it’s my TRBX in passive mode with the tone rolled halfway off, then compressor and amp/cab sim:

Somewhere between a J and a P in terms of both punch and growl there, IMO.

Yes. I know I say it too much, but sound is really the LAST thing to consider in a bass…which sounds ridiculous. It IS something to consider, for sure. What it comes down to is it would be much more plausible to get a bass to sound like another, than to get it to FEEL like another.

Just looked that up. Wow, that’s a pretty instrument! I’ll go listen to some videos on it. Thanks!

Note that I don’t want a Fender or Squier. The reason: Everyone has them. I want something a little different.

Playing devil’s advocate, there’s probably a reason for that. The tone of a well sorted Jazz bass might just be what you’re looking for.

A P, on the other hand… that’s a little harder.

(Mostly joking of course. J-basses sound great. But that same type of sound is definitely possible with a TRBX like he has.)

It’s strange reading Kerushlow’s comment that ‘sound’ doesn’t matter but it really doesn’t. When I got my new Spector this week I wasn’t going to let on here but I initially hated the sound of it - far too modern and bright for me ( I guess at heart i’m far happier with the old vintage Fender Motown tone). I knew my Spector was a keeper and I would grow into it because it just felt so comfortable and the neck is perfect, but I just didn’t like the tone and found myself still picking up my Jazz bass. I’ve spent a bit of time with it now and by tweaking the EQ on my Portaflex and dialing in a bit of compression I’ve found a tone i really like. To be fair there is every kind of tone in that thing so yeah I’d concur with what people are saying here - it’s the feel of the guitar that matters because you really can dial in any sound (provided of course you have some sort of EQ tuning to hand). The only thing I still don’t like on my Spector are the strings - I don’t know what the technical term is but I get a lot of unwanted noise from them, particualry when sliding fingers on my fretting hand. I know next to nothing about bass strings/brands - I think the ones fitted are D’addario but I’d like to get something better