You can only have one bass, what is it?

Looking to buy a bass. I want very subjective answers if possible

But now the keywords “left handed” in the post

Hello y’all! I am proposing this thread to look on the other end of the spectrum of the “MBD” Where you enjoy one of your basses (or your first and only bass) so much that you don’t even want to touch anything else anymore! I have been suffering from this for the last 3 months since my Fender Vintera 50s Precision Bass came home… At first the wide woody neck with a huge dive was challenging but …the tone… the tone got to me. In the last 3 months I tried several times to go back to my quite mo…

This comes up all the time on the forum and there really is not an answer to your question because it is such a personal preference thing.

I always say to pick the one that speaks to your tastes.
In other words, if you have a Fender, Ibanez, PRS, Cort and Yamaha Bass sitting in front of you which one appeals to you. That’s the one to get. Unfortunately for a lot of people cost is an issue but for me cost is the last thing I look at.

I picked Yamaha primarily because I own several of their acoustics and know that they produce good quality instruments.

A couple of months ago I looked into the world of Bluegrass music because I decided to finally look into learning the Banjo. First thing I considered was Yamaha. I discovered very quickly they were not the biggest recommendation of Bluegrass players and so I moved on. I also realized very quickly that with banjos the lower priced banjos would have some serious limitations to play ability. So in the end I purchased, what I would call an intermediate level model and it cost me $1,000.00 including a hard shell case. No regrets and no play ability issues. Hell it even had a zero fret.

So to answer you initial question my answer is the Yamaha TRBX504 with a Rumble 100 watt amp.

good choice! I’ll look at the Yamaha line and see if they have any lefties.

I’ll look there, but I think this is a little different than that thread

The only instrument I’ve never felt I needed more than one of was a banjo and if I still played bassoon, I’d probably be happy with one of those too… If I was only going to have one bass, I’d be happy with just my player precision bass, but I’d never have only one bass

@Glitch Last time I looked, Yamaha has no left handed basses currently. Maybe you could find a used one, as I think they may have produced LH models before. Or, try Ibanez, etc. I have the short scale Ibanez miKro (GSRM20L) in beautiful LH black

, and that model has a very good reputation. Be prepared to pay more for a LH one, though, unless you buy on sale.

Its so down to the individual and budget.
I just spent a ridiculous amount of money on a 1993 Warwick Thumb NT and this will stay with me until I’m in a hole in the ground ( or I might go all Egyptian Pharaoh and have it buried with me)
There’s so much brand snobbery in the bass market that as a beginner I not only found it confusing but I was easily pointed in one direction and then another by experts and articles.
As I’m learning more I’m realising make and price are not the only factors in choosing “the one”. It’s really about what sounds good to you and what floats your boat

@Glitch I’m left handed but forced myself to learn right handed. Why? because the choice of left handed instruments sucks compared to right handed. I’m happy I sucked it up.
You’re going to have you hand forced (deliberate pun) if you buy new. Currently Fender, Schechter, Ibanez make decent LH models. I know there are some others.
So I think you might be looking down the wrong end of the telescope.
Have a rummage around on the internet and narrow down your choices to makes / models that are left handed and go from there. No sense in setting your heart on a Yamaha if you find out they don’t currently make one.
The correct answer is obviously a LH Fender P Bass

You must be a singer if you only want one bass.

Someone here is tending a thread with all the lefty options. Can’t remember who. Sure you can search to find it though.

As much as I adore my purple 5-string Schecters, I would have to keep The Beast, aka my Kiesel Racing Green Xcellerator X64. It’s just too good and does too much, though its appearance would certainlty ah, limit my gigging potential, I think

It has some sentimental value as my first really nice bass.

It took me getting a few basses to get to where I am at this point. Knowing what I know now I’d get a musicman cutlass bass or a caprice bass.

Like it or not precision bass is a big thing. I denied it since the 90’s but gave in and drank the koolaid. I like it.

Why musicman.? Just a little cooler than Fender and since it’s discontinued and pretty hard to find it’s definitely a cool “one bass” to have.

I feel almost the same to the Joe Dart signature bass.lol. 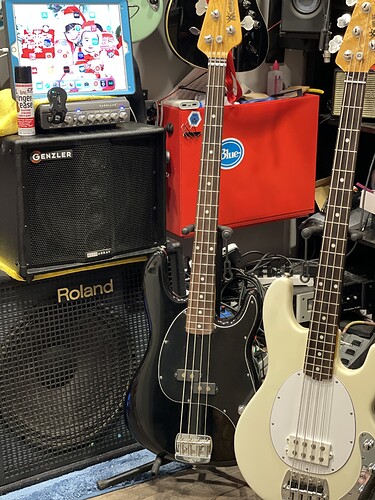 @Glitch here’s the list that @john remembered. Have a look through this list and choose something from there. Oh and maybe change the title of this thread to reflect left handed or it’ll make no sense. People will make recommendations without realizing you’re cack handed.

Wow. Tough question. If I could only have one bass, I think it would have to be my Ibanez SR500E.

If you’re looking for an “if I could only buy one brand” answer, I’d probably go with Ibanez.

That adds up to 180 LH basses, if my addition is correct. If anyone knows of any more, let me know and I’ll add them to the list.

You must be a singer if you only want one bass.

Eh. I’ve never wanted a lot of basses. I just want a couple good ones I play a lot. One would be fine too, but I like the two I have.

I’m not a collector, and I actively dislike having gear that doesn’t get used a lot. It bugs me.