Bass lines you didn’t realize were cool until now

I’ve been a guitar player for 40 years and rarely paid attention to bass lines until I started playing bass. Now I’m hearing great bass lines everywhere, though usually buried in the mix, and am startled at how many amazing parts I’ve missed.

So what bass lines have struck you now that you play?

I’ll start with The Zombies “She’s Not There. “ Damn, I never knew

Hey Lefty, I love some of the old Motown bass lines. Listen to Mr. Big Stuff by Jean Knight, or If I Could Turn Back the Hands of Time by Tyrone Davis. And don’t forget I’ll Take You There by the Staple Singers. And Rescue Me by Fontella Bass. Her name is a coincidence.

I underappreciated punk basslines until I started playing bass in my teen years.

I’ll Take You There by the Staple Singers.

I’m learning this one ATM.

I underappreciated punk basslines until I started playing bass in my teen years.

You need to check out Viagra Boys: bass-driven Swedish punk with horns! Punk bass is alive and well. Great basslines all over punk!

It’s funny. Carol Kaye is one of the most amazing bassists of our time, plus reportedly a great teacher. Before she limited her lessons to other teachers, she used to teach online lessons in general. But among the requirements she listed for students was “No punks”, at which point I was like

Bummer because lessons from Carol Kaye would have been amazing

When you said horns and punk I thought it would be ska before clicking on it based on your description but it’s exactly as you said it. Punk with horns. Damn they figured out a way to make that sound kickass.

Songs you realized later that had great bass lines

Now that I’m a beginner bass player, I listen to a lot of music with my eyes closed concentrating on the bass player. It’s an interesting lesson of taking something for granted in the background that is way more important/cool than you originally thought. If it fits, post one song. Here’s mine: [Magnum Force Theme(1973)] Man, the 70’s had such great bass licks, it could even be found in commercial music!

I only heard of her thanks to you but it seems she was a great bass teacher.

Was she in any other bands? Because I’d never heard of her. I know at that age I would have given her the politically correct goodbye too if she told me punk and metal was out of the question.

Remember when skateboarders used to be shitted on like homeless punks but they still made it into the Olympics after that?

Well I say they should pull back out because they are touching everyones butthole out in the Olympics and I respect punk too much for that to be going down with them right now.

She did the Peter Gunn theme, among others.

Sorry I must have hit my head on the stairwell when failing that kickflip so it got winded right out of me. So she is like a ghost writer for 4 overweight strings on no punk authority on acid?

Carol Kaye is badass. Here she is with Gene Simmons 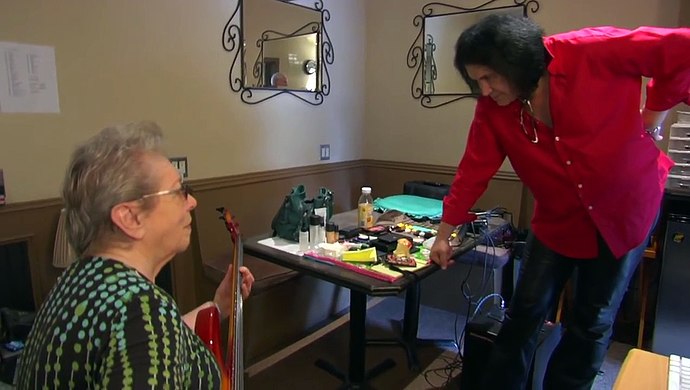 That was cool, she was badass and I love Gene Simmons! I love being schooled on someone I haven’t heard about in the bass world because it’s so vast.

Why did she have her bass painters taped though? Was it to add the high end percussive element?

Does that actually show up in your pickup though or is that only for the live acoustic element so she can have more tweeter where she has none?

Turns out i was wrong, Rollie Brundock did Peter Gunn, but Kaye did a ton of stuff like that. Many of the cool TV basslines were her.

Why did she have her bass painters taped though?

You mean by the bridge? I think she was taping down foam.

Another classic she did… You mean by the bridge? I think she was taping down foam.

Oh sorry I didn’t see the foam. I just saw the tape then typed you! My foam is in the neck isntead of bridge. Turns out i was wrong, Rollie Brundock did Peter Gunn, but Kaye did a ton of stuff like that. Many of the cool TV basslines were her.

I wasn’t ready for that! She’s done legendary scores. Scores I loved but didn’t know she dud!

Yeah it’s crazy, she’s a total badass. Only famous among bass players too. But if there was a bassline on TV from the mid-60s on, there’s a good chance she did it.

You just schooled and blew my mind so many times in one night it’s unreal.
I can feel the weight of the brick you shit when she didn’t like The Ramones like you did when those lessons didn’t happen.

She was in all the scores, I thought she was a teacher but she is a preacher.