A few specific posts seem to have been made about fretless but no general forum for discussion as far as I can see (apologies as always if I’m wrong) so I thought I’d start one for general fretless discussion.

How many Fretless players are there out there and what instruments/ genres do you play?

I do own a fretless at the moment but don’t play it much, it’s something I bought on a whim on Ebay a few years back. it’s just a cheap copy of a Stingray that someone pulled the frets out of and filled the gaps with wood filler. They did a decent job but it’s not great - I guess it was never that great to begin with.

I must admit that my ultimate goal would be to play fretless and although I think it’s far too early in my bass journey to consider buying a ‘proper’ one I keep getting drawn to them on the internet.

I’ve just found an ibanez SRF705 portamento in a UK shop with about 30% off making it even cheaper than the four string version they have and I am getting serious GAS (or is that FAS).

For those of you unaware this is a five string unlined fretless from Ibanez with a piezo pick-up in the bridge to give awesome upright tones as well as twin Bartolini’s. This monster has the equivalent of a 30 (yes THIRTY) fret neck making it’s range a full two and a half octaves.

If i got this I’d be opening myself for a double whammy of challenges - fretless and five strings (I have only ever played four strings). I’d get the four string version of this but as the five string is on sale and cheaper it’s seems daft not to go that route.

I’d be interested to hear from anyone who has played one and also welcome any advice on why I should or should not buy it. Regardless of what anyone says I may just get it whilst it’s on sale to look at until I’m ready for it 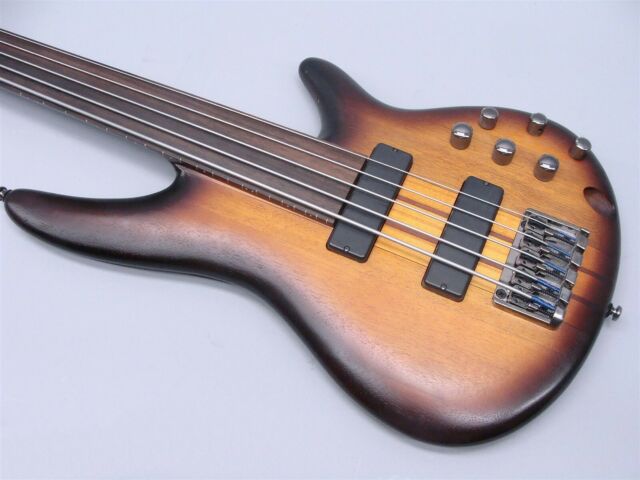 I think that might be a good one to go with because it still has the fret lines marked on the side of the neck, which will make it easier. I have a Harley Benton fretless Jazz Bass that I bought to give fretless a try. I have found that fretless is just not my sound. I think they sound good, but they don’t sound like me, if that makes sense.

advice on why I should or should not buy it.

You’re asking the wrong crowd. You should totally buy it, just because

Seriously though: I love the looks of fretless basses, even though I don’t think I would ever be able to play one. You obviously want this bass, so if it’s a good deal and you can afford it, why not?

I just picked up a Michael Kelly Dragonfly 4 Acoustic Fretless on a whim (it was used on Craigslist at a price i couldn’t pass up). For $300, its super solid, neck is good, and looks great too. Put tape wounds on it. I bought it mainly because I couldn’t get Cold, Cold Heart out of my head one day and so I decided I had to get as close to an upright as I could, and it does a pretty good job, esp when amped.

I don’t think the fretless part is too hard to deal with actually. The GIANT body of the bass takes more getting used to for me.

Doesn’t “should I buy” really mean “I’ve already decided I want this, talk me into it”?

Yup. Been there, done that.

Buy it! Fret less have a totally different tone and feel…you do have to push down a little harder, and you have to become intimately familiar with the fretboard to get the most of it, but they sound wonderful. I’ve only messed around at guitar stores and never fully bought on, but I see the appeal.

I had an Ibanez 5 string fretless for awhile, and also had an EUB, which of course is also fretless (just like it’s cousin the double bass).
There are many pros and cons with fretless, but ultimately chose to stick with fretted.

Is anyone aware of any fretless specific online courses? I know we are spoiled by Joss’s teaching style. But, I have a new to me fretless coming next week, so I would really like to find fretless course on line.

I’m not at all a fretless fan at this point but I’d like to have one. obviously it will happen sooner or later, and this will be very suitable for some of my dark country things.

I have an acoustic fretless that I picked up but I think will ultimately sell Vs leaning more on it. The neck is gigantically long and the fret distances are monsters at the headstock end. It was a cheap deal on craigslist and I had no idea what I was doing. I’ll noodle around on it until I swap it out for a fretted acoustic and MAYBE some sort of fretless something one day.

I had no idea how “young” acoustic electric basses really were

I’m glad you asked that question Carl as I have the same problem. I’m about to purchase a fretless but I’ve been looking around for a while now and can’t find any really good online resources. About the best I’ve found so far is Tony Franklin’s Fretless Bass Foundations on Truefire. I believe you can just purchase that module without being a Truefire subscriber but it doesn’t really extend further than a basic introduction to fretless. . On Scotts Bass Lessons there is also Steve Lawson’s grandly titled ‘Ultimate Fretless Bass Survival Guide’ but what a misnomer that is. There is no doubting Steve Lawson’s skill on the Fretless but a tuition video this ain’t. It takes the form of an interview with Scott in frame asking him questions and Steve demonstrating his answers but no actual ‘teaching’ is done. I find this highly annoying to be honest - even when Scott brings in other tutors he can’t resist being in on the film!! The other problem with this one is that you can’t access it without being a subscriber to Scotts Bass Lessons and the there are many reasons why you might not want to do that. I would love to find an extensive fretless course along the same lines as Josh’s course - if you find one before me, let me know!!

I will continue the search. I’ll post anything I can find.

I don’t feel like you need a specific fretless class. I first learned bass on a fretless. You just play it like a fretted bass really. Sure, it’s harder to play the right note without frets though, so that is different. And it sounds a bit different. Slides and such feel and sound different without the frets. But I certainly didn’t play it differently. Who knows though, maybe I was doing it wrong.

I love the sound of a fretless bass. The way how really skilled players can utilize it (I guess Tony Robbins is mentioned somewhere in this thread.) and “flow” over the fretboard is absolutely mesmerizing to me. If I wasn’t a coward I would suffer through the B2B course with a fretless bass.

would suffer through the B2B course with a fretless bass.

I didn’t do B2B with the fretless, but I did the first part of the TalkingBass Sight Reading course with my fretless. That was a real adventure, but it really helped hone my skills. In sight reading, you have to keep your eyes on the music stand and not on the fretboard, so muscle memory is crucial. If you can do it on fretless (with proper intonation) you can do it on fretted.

“Sight Reading course with my fretless” … This seems like a really good choice if a person has enough patience and will to go through it. Kudos! In the end, the bass isn’t anything more than 4 strings each with some basic sound and board underneath. Frets just make it more systematic.

I posted this in Friday music thread but I think it fits better here. If someone by any chance didn’t see that already

I learned to play about 35 years ago with an old Univox violin bass with an unlined fretless fingerboard.
I’ve been playing this bass since the early 1990’s. It’s a 1982 Pedulla Buzz. Birdseye maple with ebony fingerboard.
For many of those years, it was my only bass. It replaced a fretless Ibanez Roadstar II which I sold pretty quickly after getting the Pedulla. 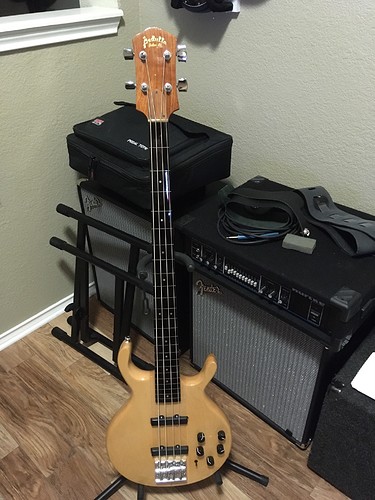