Learning songs that don't fit on one page

While learning the easy songs from the course extras I’ve come to the realization that my biggest issue with the medium and hard songs is going to be the length of the sheet music. As soon as a song does not fit on one page on my screen I start resorting to memorization, which I want to avoid as much as possible.

This is why I did not learn The House of the Rising Sun for example - it’s the same chord progression throughout the entire song, just with different (seemingly arbitrary) rhythmic patterns. I learned the chord progression, I like the song, I can play it, but I am not going to bother memorizing all those rhythm changes.

So how do you learn songs that don’t fit on one page? Do you scroll the pages as you play? Do you print out the whole thing and plaster it on your wall? (Or you have a super wide music stand?) Or do you learn and memorize the songs in smaller chunks?

Also, @JoshFossgreen used something with his feet to start and stop the backing tracks in the B2B videos. Can something like that be used to scroll sheet music on a laptop screen?

I built myself a sheet music holder that sheets of music can hang from. Once I learn the song though as written, I take it all down, pull it all apart, put it away and play the song the way I want to play it… 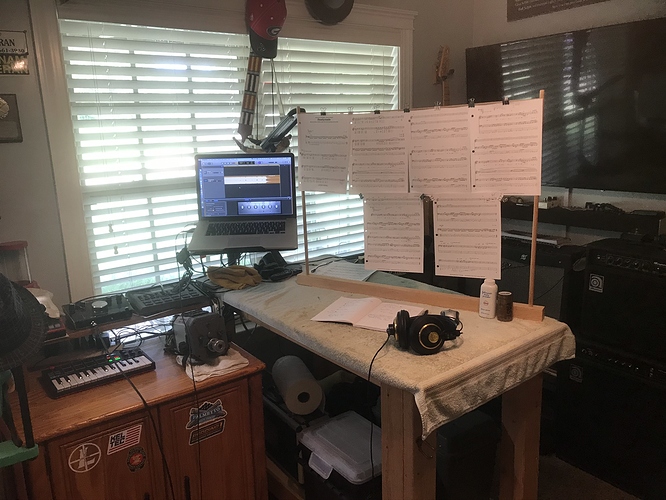 Wow that’s really neat, pretty much exactly what I would need too…

Just a few dowel rods pushed into drilled holes on a 2x base. Pretty simple but does the trick when learning a new song.

So apparently “page turner pedal” is a thing. Does anyone here have something like this?

Same with me. I print the pages out and place them on the music stand.

Personally, I learn better when I ‘chunk’ the music. For what I’ve been doing lately, there have been main riffs that are the core of the song, so I try and get pieces of those done a little at a time.

I work on the ‘muscle memory’ of the riffs so that I really don’t need to think about them. And that takes some time. But I work better that way. Again, not necessarily for everybody, but it works good for me.

Allows me to break-off manageable pieces, have small successes and build on them (again, for me, I need to have those little things or I get frustrated).

But the hardest part, no lie, is after learning a piece, maybe not 100% perfect, but to the point where I feel comfortable playing in front of others, is going to a new piece. It’s having to admit to myself that I don’t know something and I’m going to be ‘bad’ for a while. That’s hard, again, for me, because not playing well is hard on the ego - and I’m my own worst critic.

Anyway, a little off-topic, maybe? But if I’m working a long song, I’ll print the whole thing out and strategically place the sheets on a ‘normal’ music stand to work on those little pieces.

Or do you learn and memorize the songs in smaller chunks?

I work on the ‘muscle memory’ of the riffs so that I really don’t need to think about them. And that takes some time. But I work better that way. Again, not necessarily for everybody, but it works good for me.

Your whole post is pretty much spot on for how I do things, especially this one.
I often sit with my bass while doing other things, TV, talking to others, whatever, but just sit and play some riffs, or even sections, over and over and over, and get used to playing them without thinking about them.

This also helps when you start to play it with the song playing, or backing tracks, or even with others, you can really concentrate on the groove, the drum beats, and feel the song without having to Try so hard to play it and feel it at the same time.
IDK if that makes sense, but this idea is what works best for me. So far I have not found a better way.

Understand, that the initial learning of a riff, or a section, or a solo, or an intro, whatever, can start out bar by bar, getting two bars to work on their own, then combining them. Then working on the next til you get it down, then combine it with the first two. It can really start out as bite sized, but once you get the riff or section all strung together, thats when you turn it into muscle memory by constant repetition

Have you tried it with the course extras by any chance? Noteflight seems to respond to cursor up/down and page up/down, so I assume it would work with these page turner pedals as well.

Yeah but that’s where my original question comes in: what do you do once your fingers can already play the song, but you don’t have the entire song structure memorized? You can’t muscle memorize 5 pages of song structure. That’s either in your head or on the sheet music in front of you.

Take my original example with The House of the Rising Sun. The song is basically the below 6/8 rhythms being played in random order over 3 phrases. They are simple, they are not a technical challenge, and they are completely interchangeable. The only challenge is trying to remember which one comes next. And that’s where I stopped learning the song, because it was no longer fun. (And hopefully that’s where the page turner pedal is going to come to my rescue.)

If you’re playing along it doesn’t work very well, because Noteflight takes control of the scroll action with its’ autoscroll feature and locks it to the view. Meaning, if you press “down” it goes down but bumps up to where it’s currently playing. If you’re just consulting (ie. the player is stopped) it works flawlessly

That’s perfect, thanks a lot for checking. I never use the play button anyway, so that should be good enough. I’m going to order one today.

It’s a pretty useful tool! I use it for a lot of other things other than music

My personal best example of “exact” versus “in the spirit” is Highway Love Song by STP and Smoke On The Water by Deep Purple.

Again, with my opinions, you mileage may vary…

With STP, I find the need to get that as close to exact as possible. The bass role with their music is very well defined, and my personal feeling is that it needs to be spot-on. Same with ‘iconic’ stuff, like Ramble On (for the most part), or where the bass is the core of the song like Neon Moon or Hysteria. And those take the longest to develop that “muscle memory”

If you think about Smoke On The Water (the first guitar lick everybody seems to learn wrong, including myself

), for the most part, the bass is filling the space in places where it would otherwise be relatively boring in the verse vocal section. There’s 5 or 6 core riffs, distributed in a way that, if you learn them individually, you can pick and choose where they go. I don’t personally find the need to “muscle memory” them into where they belong in the song, but rather to “muscle memory” the riffs themselves and then pick and choose where I want to put them. I think you’re operating in the spirit of this music and still doing justice to the tune.

I know there’s probably disagreement out there, and I know I’m not playing the song exactly the same as the album, but I’ve been to enough concerts where you can see bits that are done differently live by the original performers and there’s no loss of fidelity to the spirit of the music.

But it’s not something you’d hear at a Muse show or a Tool show…they really can’t go off-script because of the structure of the music. Where you hear the different stuff is really the bluesy 1-4-5 stuff that permeates everything. So you’re riffing around the melodies…and I believe you grab the core riffs and put them where you like them. So I take my time and learn the little bits (again, Smoke On The Water is a great example) and put them where I feel them.

And I think this all boils down to taste - again, if you want to be “exact” or “in the spirit”

On the stage, I’ve found that I could play the same riff on Smoke On The Water over and over, and I was the only one who cared about it.

Just my personal thoughts on this (wrapping this up) -

You didn’t veer off, that’s exactly what my question was about.

And yes you raise a good point. Reminds me of what @Gio told me in another thread (see here) - he basically said that you don’t always have to follow the sheet music to the letter. (It was a different question, but kind of the same conclusion.)

something with his feet to start and stop the backing tracks in the B2B videos.

A very fancy and expensive device known as… the space bar on my laptop.

Can something like that be used to scroll sheet music on a laptop screen?

I know some folks do something like that for reading on iPads, but I don’t have any experience. I just miss a few notes to hit a button to change pages! (never needed to read big iPad charts on a gig)

Or print it out on a music stand. You can fit 3 pages, or 5+ with stand extenders. I’m all about Manhasset music stands.

Yeah but that’s where my original question comes in: what do you do once your fingers can already play the song, but you don’t have the entire song structure memorized?

Yeah, you are right, a little off topic. I was just sort of agreeing with what @numberman2000 was saying.
For me, it is all memorization, I don’t use the sheets often after learning the song. But everybody works differently, so what I do is not for everybody in every case.