Five months and ONE day after ordering, DHL drops off my Fishman Fluence dual soapbar kit!
YEEHAA!
Looking at the date on them, it’s no wonder they took forever to turn up. 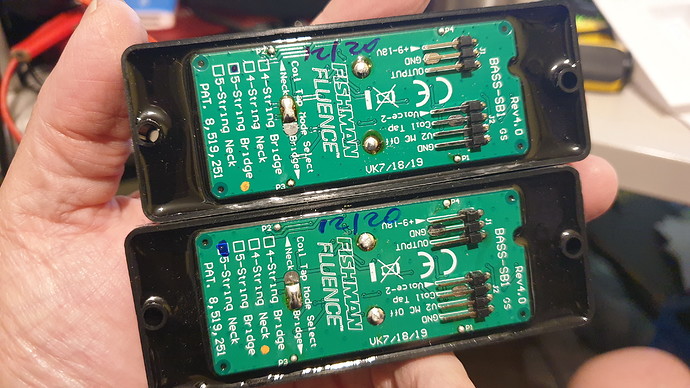 There’s not much room in here. Luckily, most of the electronics is under the pickup. 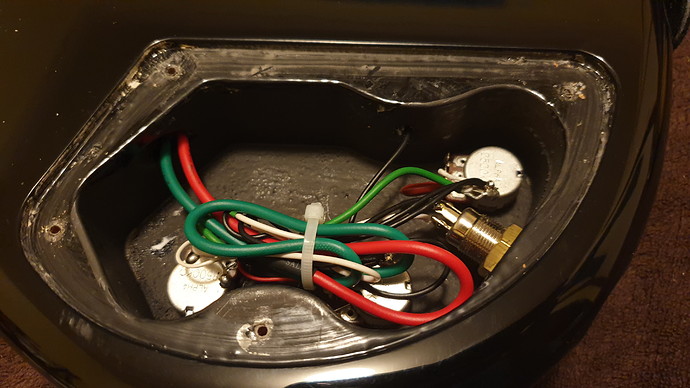 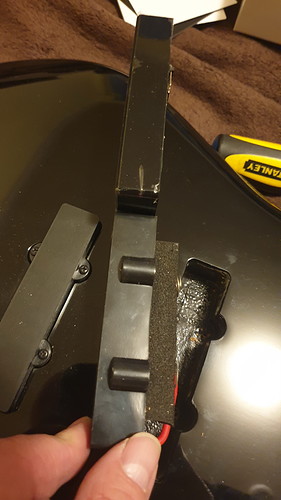 Well, the pots have big boards on them with prepared soldering points.
I wonder if I have enough depth in this tiny shortscale? Best I check that as well.
Out with the verniers… 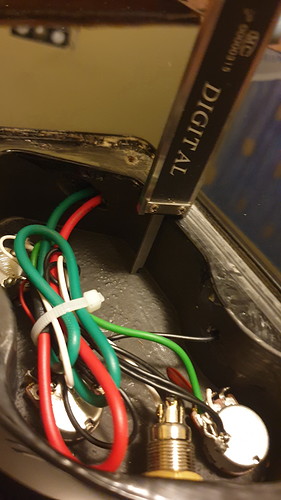 And I’m cooking! My complete lack of research is going to be badly rewarded with room to install things. 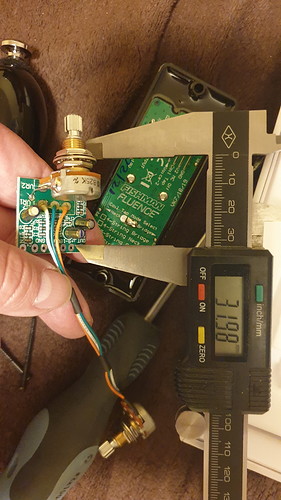 I just need to decide where to position them. I want to put the bridge one centrally over the current spot and move the neck one forward a bit…

How can I convince my friend to rout out the new pickups on his milling machine? 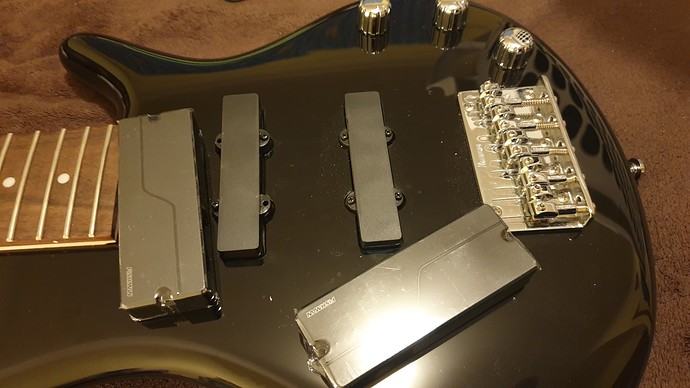 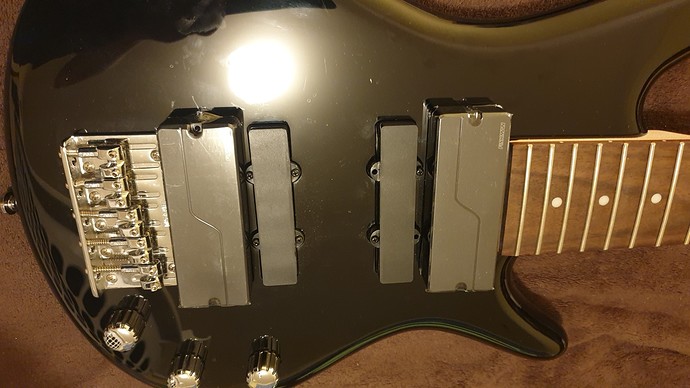 Just then, I got a message telling me that the postman is about to deliver a parcel and if I’m not home, they’ll take it to the post office where I’ll be forced to swim through a shark tank for the amusement of the staff, in order to retrieve it.
That’s a bit over the top.
Last time they only wanted me to juggle flaming chainsaws before they handed it over.
I’ll have to drive home wet…

But I forgot that I was home and met the van in the driveway.
He hands over a second set of pickups. Aha.
Right.

My humbuckers have arrived. Ordered 4.5 months apart and yet arrive on the same day.

Let’s look closely at them. I notice that they’re not labelled at all.
What the ever lovin’ f…
Oh, hang on. They’re different. 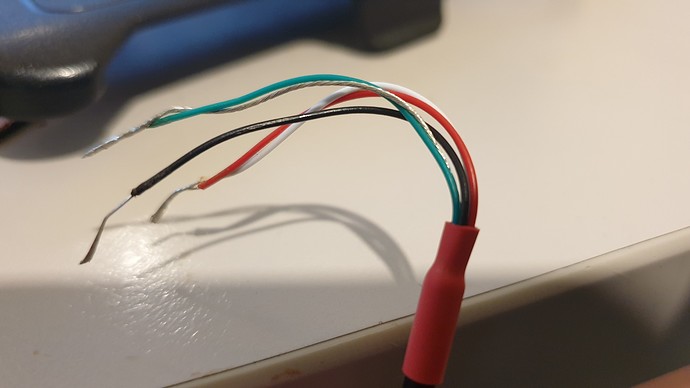 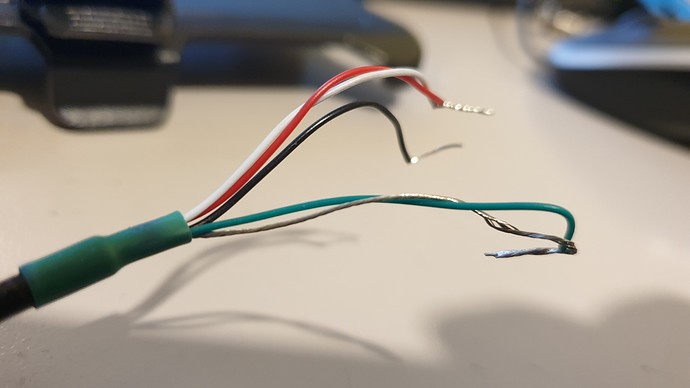 If you haven’t spotted it, prepare your own Australian creative swearwords.

I’ll just check the resistance across them all and then work out which one has more winds and put that one at the bridge. One measures 10.46 KOhms. The other is 10.25 KOhms. I proclaim the first one to be BRIDGE, and write it on the black bottom in black texta.

I also need to ensure I have the right combination to switch into different modes of single, parallel and series.

Okay. That green one has the bare wire, so it must be chassis earth. Therefore, that green lead is also going to be negative .
The red and white wires are tied together in both, so convention says being humbuckers that the black wire must be … positive.
What idiot decided to use that colour as positive?

I desolder the red and white and check which coils they belong to.
The Green Negative tests out to the red wire. Therefore the Red is first coil positive.

This, by a crafty level of elimination means that the only wire left, White, MUST be second coil negative, in the library with the candlestick.

I’ll check it anyway. Bingo. How about that?

I’ll shoot off an email to the vendor to check to see which pickup is which, anyway.

I hear the postie bike turn up and see on the security camera that he appears to be having some fun shoving stuff into the mailbox.
He’s taking a while.
Best I go empty that.
There are a few parcels, including one from Farnell.
I don’t believe this.
The two three position On-On-On switches have turned up.
I’ve already done the research on how to wire these up.
First up, jumper the ends. Then write N and B in black on black again to follow through with the goth labelling colour scheme. 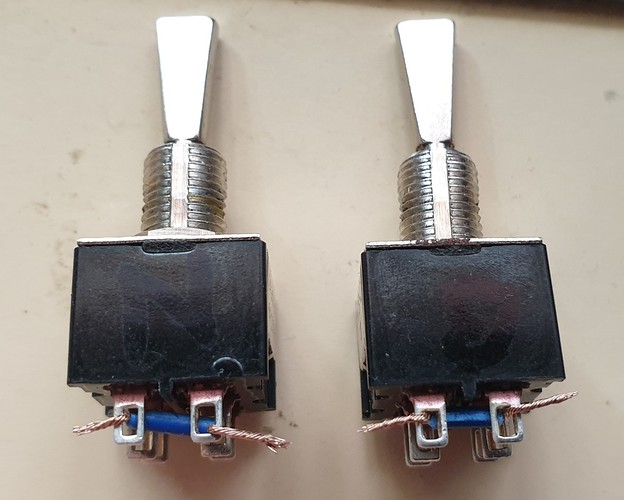 Then swap out the pickups and do soldering stuff. Carefully mentally pronouncing it with an L while wondering how the hell the Americans managed to get soddering out of the same spelling when the L was CLEARLY there all the time.
Maybe the same original “soddering” sod also decided to say “erb” because he was somehow blind to H’s?
Who’s to know? They’re called Herbs everywhere else.

Right. Wire up once, check twice, solder and… that looks okay. 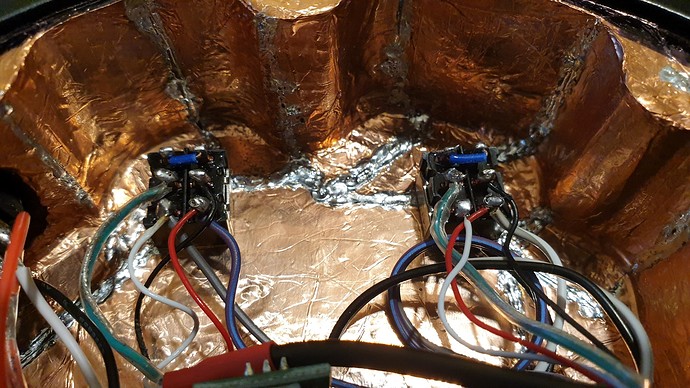 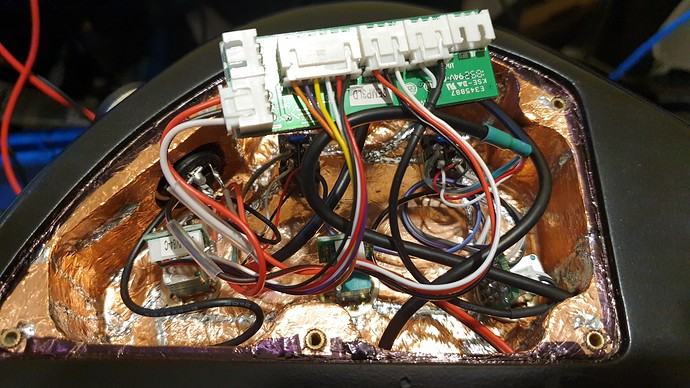 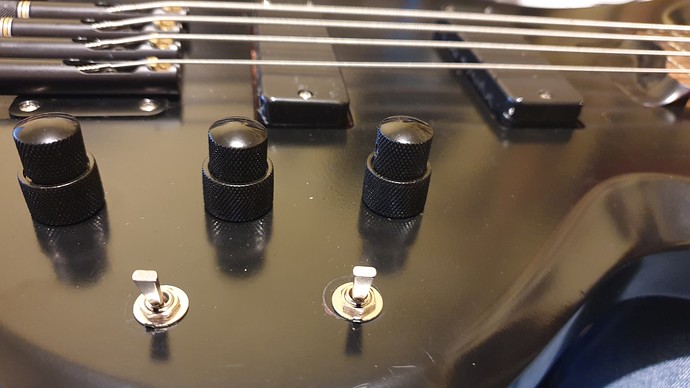 I plug it in and …
that’s totally underwhelming. That’s a bit disappointing. There’s hardly any volume at all and, surely I didn’t bridge anything.
Then I notice that you could fly a small plane between the strings and pickups.

A few seconds of screwdrivering sorts that issue. I plug it in again and turn it on.
I’ve got no real idea yet which way the switches orient, but I can work it out.
There’s a HUGE difference in output and I really like it. I don’t think I’ll bother upgrading these test pickups.
Then there is a surprise. Having the choice of where the mid frequency cut or boost is really cool.
I can up or cut the mids, OR I can sweep that down close to the bass end of things and boost the crap out of those lower mids
Oh, lawdy, that is fatter than absolutely ANYTHING else in the house.
The open E string now emits pure shock and awe. I might need a permit for it now.
It’s getting late.
I’ll take this in to the music shop tomorrow and show the bass manager this development.

This morning sees me get another email from Farnell about yet another switch arriving. Apparently this courier will just leave it somewhere safe if I’m not home.
I’ll wait.
An hour later and I have this very special four pole, three position On-On-On switch. 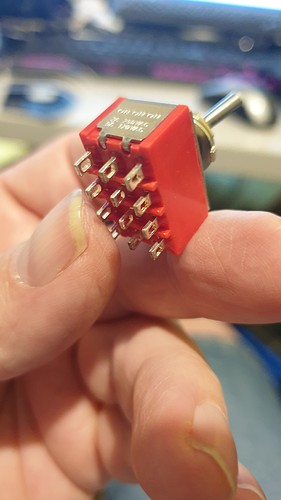 I may have mentioned that I found a G&L L2500?
They’re really nice. The only problem with them is that you have two humbuckers and you get a three position switch for Neck/Both/Bridge choices and a two position switch for either Series or Parallel.
This is obviously a crime against coil selectivity and luckily, people more geeky than I have got the issue firmly in hand.
All I need to do is follow this wiring diagram and I’m good to go with Single Coil inners!

I pop the back off to discover that I have disturbed some small animal making a nest out of the wires. 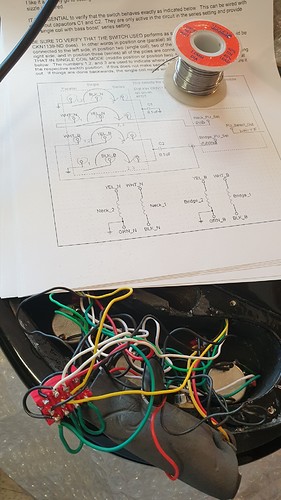 Maybe they let the work experience kid finish this one off, right before the end of work on a long weekend…

Oh well. Out with the old, then careful attention is devoted to mainly, not burning myself or dropping solder on the finish. Read that word with an L too, dammit. 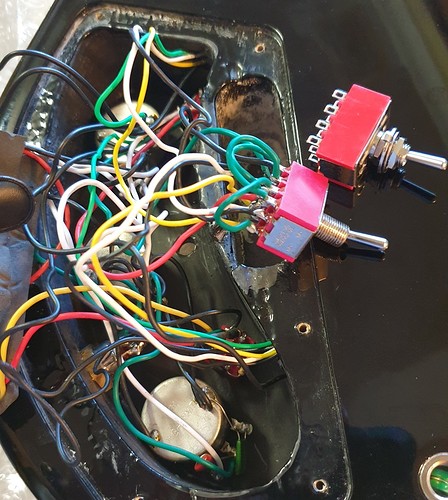 It looked much harder than it was, but you’ll notice in the photo that every connector is circled and the selector switch has the wire colours written in pencil.

I may also mention that on the back of that sheet is the exact original wiring, carefully detailed.

The laws of the universe demand that I waste time doing that in a sacrifice to a successful job.

If I don’t give myself a back out path, this will ensure that the job is totally hashed.

So two modded basses go into the music shop to be tested by the bass manager.
He’s a recent convert to G&L and proclaims that the single coil switch mod is a GOOD THING.
The Mesa Boogie system at the shop really demonstrates the differences in the coils.

Then we come to the headless. He is impressed with it.
It draws the attention of a few other staff. Headless basses are pretty rare still around here.
To my delight, the staff hand it around like a baton and the last guy finally sweeps the mids down to the bass end of things and gives it the beans.
The guitar guys look over to see what has happened.
The day can’t get much better.

Or so I thought.
With half an hour before closing, I hit the local pawn shop. Zipping around, I spot a Logitech Z5500 surround sound system that has to be priced mistakenly. It should be at least twice that.
I don’t care. I’m having it.
I’m running twin Logitech Z623’s at home, and a Z550 means that I can retire one system.

I have a standing request to acquire another Z623 setup for a friend of mine.
The same friend with the milling machine who I need to help me with the pickup routing…

I get home to find an email from the pickup vendor. Apparently I’ve got the headless pickups in the wrong positions.

Glorious - what a read! I needed that today

I mean I lost track of how many basses you were modding at seemingly the same time with which switches and PUs, and whether you bought a bass in the middle of it all and whether the Z5500 is a bass I should consider… but the entertainment value did not decrease because of that… no siree Bob!

Wait, we’re these pickups in the 4 string mikro? Cuz I want to replace mine and I’m going crazy trying to figure out if regular p/j combos would fit.

How many bridge saddles can you count?

Yeah I just glanced through the above.