Starting a new thread here for anyone that wants to post their bass construction projects - new builds, mods, whatever you’re tinkering with. There are some true badasses in these threads with this stuff - very inspiring - so much so, that I’ve taken on a beginner project myself:

So I saw this used Ibanez on Craigslist for $50, when I got there, this poor bass looked like it was way past it’s heyday, maybe had a beer or two spilled on it and not wiped up right away, then probably sat in a basement for a very long time. But plucking the dusty, rusted strings, it still worked! I paid the seller, who then informed me that the giant amp that a dog had chewed almost the entire tolex on, and didn’t even really work came with it, even though I didn’t want it (wasn’t even a bass amp). He probably just didn’t want to haul it to the junkyard himself. Ahh, the characters on Craigslist!

But I digress. So here’s my new toy, that I had zero qualms about taking apart entirely, just to see how it’s all put together. What I’ll do with it, I don’t know yet. But in the end, there’s actually not too much to a bass, lucky for me. No getting your fingers caught on something, no getting electrocuted. My kind of project

Now, to bust out some power tools 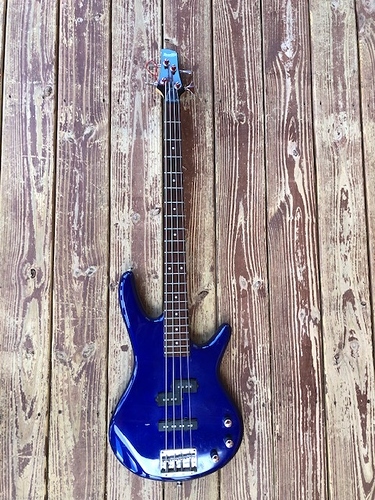 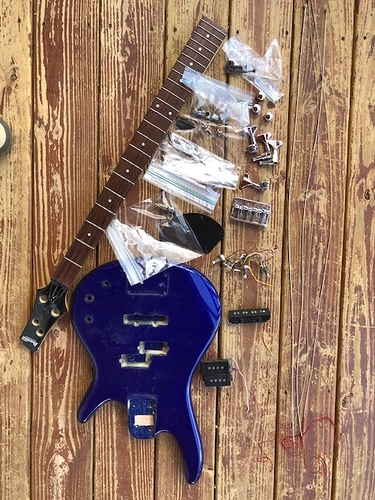 Cool! Doesn’t look that bad, judging from the pics… I mean, some people pay a lot of money to get their basses vintage-ified, creating the appearance like they have had a hard (rewarding?) life in rock’n’roll

Cool! Doesn’t look that bad, judging from the pics…

Yeah, once I wiped the whole bass down a few times, she really shined !

some people pay a lot of money to get their basses vintage-ified, creating the appearance like they have had a hard (rewarding?) life in rock’n’roll

I think I may go for a vintage-y look for this bass. Mine won’t be a high dollar job. Just some sandpaper, and some experimentation - pretty low budget

This is a pretty good idea, @Vik!

Pay only $50 for a bass (which doesn’t look too bad to start with), and then take it apart, learn something about how it’s put together, how it works, etc. etc.

Maybe try to upgrade the pups or the bridge? And if anything goes wrong, it’s not too much cash down the drain. Sounds like a win-win situation to me!

All best and good luck with your project, Joe

My green P is a little bit modified :

Also I have a bass project currently : an ultra short scale (25,5") that I plan to make using guitar parts. I have an old japanese Ibanez Sabre cadaver, exactly the same model as this one : 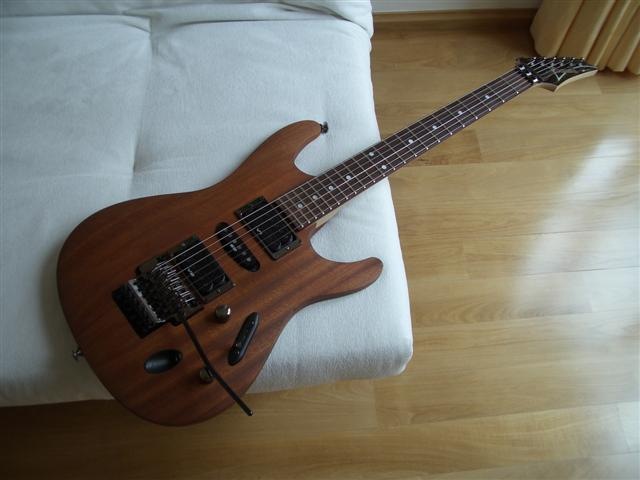 but mine is in VERY VERY VERY bad condition. there is a huge crack in the mahogany body. I started to reshape a bit the body and I have a lot of wood work to resurect it. Also I’m trying to sell some parts (including the expensive Gotoh Floyd Rose bridge) to buy some bass parts for it.

Not sure what I will do exactly (pickup configuration, bridge …) but I don’t plan to spend much money for this project. It’s more for fun than anything. I may keep it simple. I’d like to have a playable and funny shred-machine.

Also currently I’m thinking about getting another P, I have several ideas and I’m not sure at all what I will do at this point. One of the idea would be a P with two 51-style pickups or two small rail humbuckers (Strat/P51 sizing), this could be fun. This could start from a P-style kit, nothing impossible with some routing. Not sure at this point, but I’m thinking about it !

Another thing I’d like to build from A to Z would be a fretless cigar box bass. I have some scrap wood here …

Y’all are wonderful and crazy. Love this forum and this thread. You’re all getting all Dr. Frankenstein on it. It’s great.

I promised myself (and my wife) that I wouldn’t be buying any more basses until at least after completing the course. But you just never know when a once-in-a-lifetime bargain will pop up on Gumtree (like Craigslist). It probably doesn’t help that I’m now trawling through all the cheap basses in a 50 mile radius.

You lot are a terrible influence. I love it.

Mine is going to be a Phil Lynott “replic.” Can’t afford the Fender version, but I picked up a black MIM p-bass to start with. I’d be happy to pass on the active EMG pickup that’s currently in it. It’s coming out, and a DiMarzio going in!

As a result - a DIRECT result, I might add - of this group, I started bookmarking cheap basses on Gumtree (Craigslist-esque). I’ve already got a winter job list as long as the drive belt on my ride-on mower, and now I’m adding guitar electronics to the skills I need to hone for the coming months. 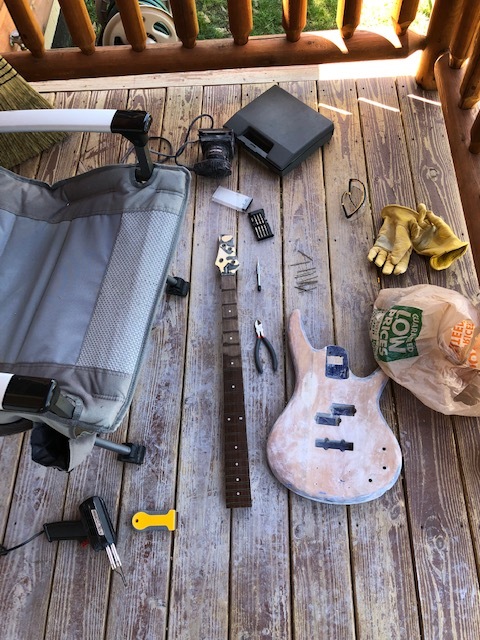 Sanded the body almost completely down, except for the sides - a little too raw now, so I’ll do something here…

Little problem - so I started sanding the fretboard, oops, if you mess with one fret, be prepared to have to mess with them all. But I don’t really want to learn fret leveling right now, so… this is going to be my first fretless bass! I started pulling the frets out, one by one. A razor on the sides, a solder gun to heat them up, and some pliers (the fret puller in my setup kit was total crap). Off they came, though some were tougher than others.

Getting all new parts for this bass - pickups, wiring kit, nut, tuners, strap buttons - but all cheap stuff off Amazon - there’s a real possibility that I may not be able to put this bass back together again, or it may not even be playable

Tempting but it’d cost double that in petrol to get it. But TEN whole British Pounds for a bass to play luthier on?
https://www.gumtree.com/p/guitar-instrument/bass-guitar-session-pro.-/1351600006

TEN whole British Pounds for a bass to play luthier on?

Haha, playing luthier is fun actually! And there are no real consequences apart from a few bucks, and some learning. It’s possible it’s $ or £ or € or ¥ down the drain, but I’ve spent worse on other hobbies!

yeah, I did some luthier-playing too on a guitar today (not sure it would be interesting to tell more and show a picture as it’s a guitar and not a bass).

About project basses, as I told quickly on another thread, I’m asking myself if it could be a good idea to get an entry-level JB and convert it to fretless. The main problem on cheap basses is often the setup and the fretwork, so it would be really easy to fix with this kind of project. Another problem is the low-quality electronic but again it could be upgraded easily if needed. Not sure what I will do or not, what is sure is that I’d like a fretless bass ! I might try to build a cigar box fretless bass first but it’s not really the same thing.

if you mess with one fret, be prepared to have to mess with them all. But I don’t really want to learn fret leveling right now, so… this is going to be my first fretless bass! I

Very good, @Vik . . . a slight misstep is leading you down a different road of discovery than the one you had originally planned on!

I guess you’re going to fill in all the spaces where the frets were, sand them down, re-stain the fretboard etc. ?

Good luck with your project, Joe

a slight misstep is leading you down a different road of discovery than the one you had originally planned on!

Yes! I have a feeling this will be an evolving project, so I’m keeping a pretty open mind

Hoping too many missteps don’t lead me to a true Frankenstein bass though!

I guess you’re going to fill in all the spaces where the frets were, sand them down, re-stain the fretboard etc. ?

That’s the plan - I’ll try to post some pics, maybe let others know the pitfalls and the progress. This may be the only time where I can do some real surgery on a bass without worry - would not try this on my other basses

yeah, I did some luthier-playing too on a guitar today (not sure it would be interesting to tell more and show a picture as it’s a guitar and not a bass).

A lot of overlap between the two so why not share. We may learn something and we’ll get to see what you do. Go for it!

A lot of overlap between the two so why not share. We may learn something and we’ll get to see what you do. Go for it!

not sure you will learn anything but OK

backstory : the starting point is a Squier Telecaster a friend gave me in pretty bad shape (the neck was broken), about 15 years ago. I managed to repair it and painted a cute custom color as usual 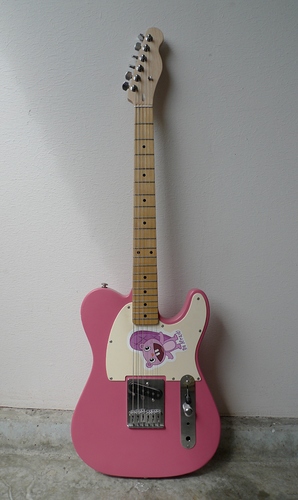 I own two other Telecasters so I almost never use this pink beauty. I decided to try to convert it to a Telecaster Deluxe, which is a Gibson-ized Tele with two humbuckers. I also decided to use this project to experiment with semi-hollowed body. The goal is to gain some weight and resonnance, without the feedback hassles of a fully hollowed body. Don’t know if it will work, in theory it should.

So, today I almost finished the routing for the humbuckers and the multiple small cavities, and the body now looks like pink swiss cheese : 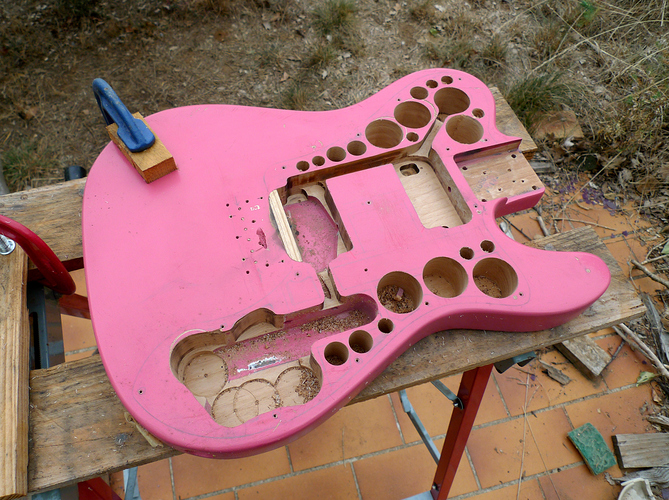 The cavities will obviously be fully hidden under the pickguard : 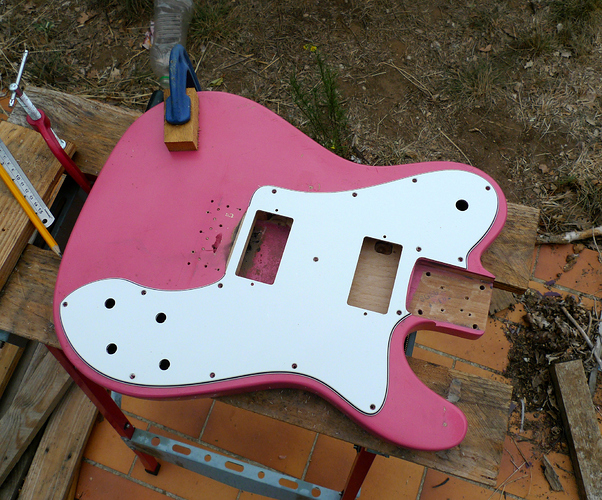 I still have a lot of work on this project but if I manage to do what I have in mind, the final result should look pretty much like this : 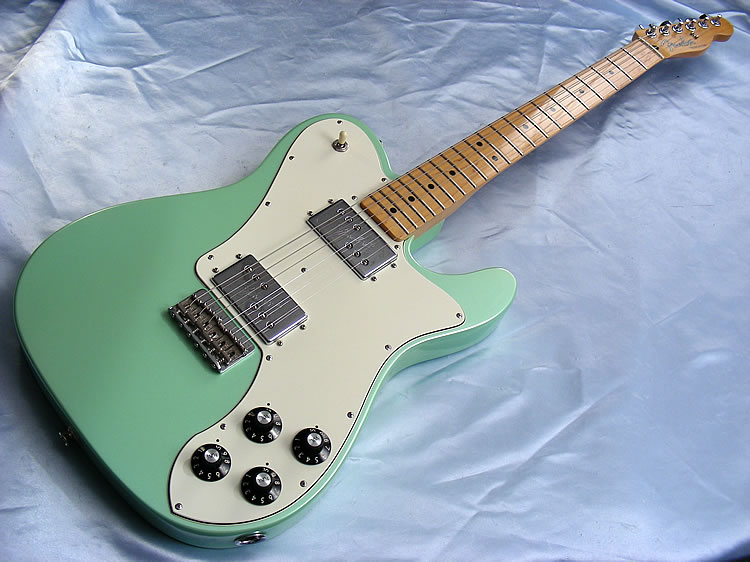 and the body now looks like pink swiss cheese

Whoa! I don’t own a router, so my idea to make the cavity larger in mine is to creatively use a drill bit too, but looks like you really did it there to make it a “semi-hollow” body. With the even spacing on some of those holes, I almost don’t want a pick guard to cover all the swiss cheese up! It’s kind of cute.

I don’t own a router, so my idea to make the cavity larger in mine is to creatively use a drill bit

I made the routing for the pickups and wires with the router, but the round cavities are made with a drill press (two very complementary tools sometimes) with this kind of drill bit : 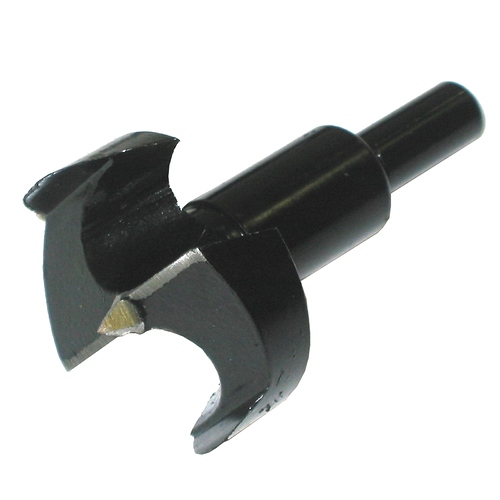 how not to remember the famous Ron Thal swiss cheese guitar : 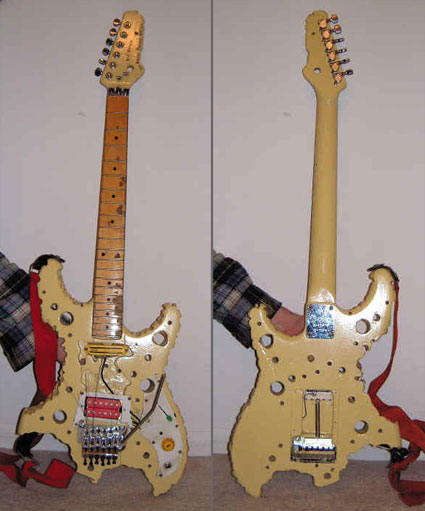