screws went into metal fittings set in the wood, not the wood itself.

Pretty standard on the German made Warwicks too @eric.kiser

Ive also reported it to Thomann since its still under warranty.

Do you get a discount at least? I mean this is pretty bad imo

Oh how sweet it is.

Yeah they gave me back part of $$

Damn, once I installed it in, I realised how wrong stock pup sounds.
Now it sounds like a proper Stingray.
That sizzle, mmmmmm, gives me chills!

First day I installed it I was sitting down till 4 am playing it.
Makes me wanna play it everyday. I even transcribed the local song I wanted to learn for so long, and there are no tabs or sheets for it. It was my first transcription.

I’ve been down to the shed again. Bass number five has had a long gestation period, largely because I got overly ambitious. I fancied a Les Paul shape, a classical guitar style headstock, three pickups, maybe a flashy finish, and a string tail-piece built into the body (but not string through, I’ve done that before). 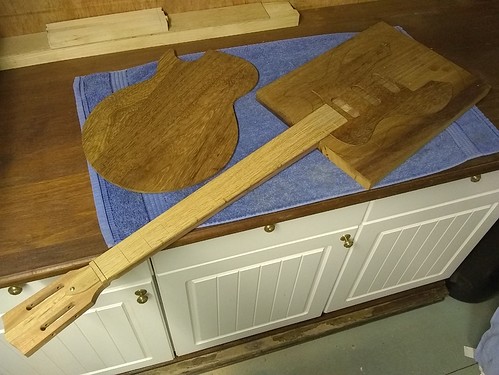 13264×2448 1.81 MB
The neck is a laminate of oak and mahogany with an asymmetric profile, with an oak fretboard (I had a couple of old oak floorboards hanging around the garage for a couple of decades, and some mahogany offcuts from the last bass neck I made). 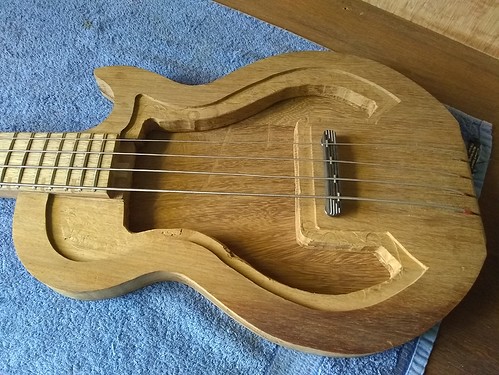 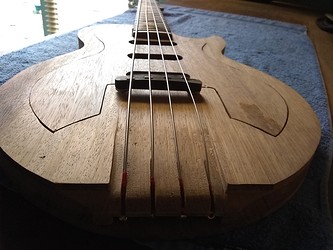 53264×2448 1.53 MB
Things got out of hand when I acquired some birch veneer and glued it to the back of the body and pickguard. I used the ironing technique (glue both surfaces, let them dry, lay them up then iron the veneer so the glue flash bonds) but didn’t overlap the two book matched sides. Consequently, one side moved and I have to rout a stripe down the middle and veneer a thin strip into the gap. It looks OK now it’s been oiled but I was kicking myself at the time. 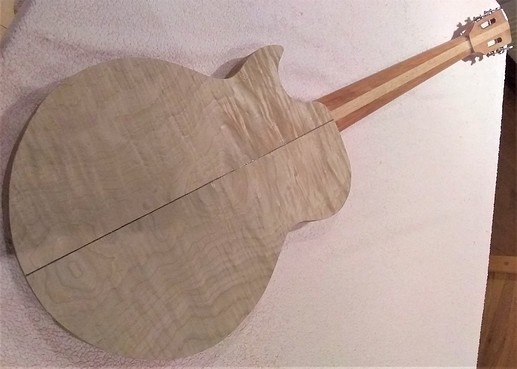 6a1528×623 127 KB
It was not intended to be a hollow-ish body when I started but the pickguard grew into a symmetrical design and then I was attracted to the idea of a pickguard that was flush with the top of the body (don’t do it, it’s not worth the hassle), and I just got carried away with the routing holes thing… 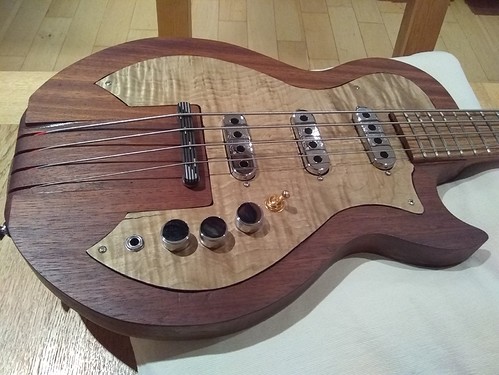 8a1600×1200 343 KB
There are seven combinations for a three pickup layout, so I sacrificed one and bought a Free-way 3X3-03 toggle selector switch with six positions. It’s a beautiful thing but it needs better soldering capability than I possess, so I have enlisted a friend to connect up the Tri-sonic single coil pickups, master volume, tone and six capacitor varitone. I’m still contemplating the best way to ground the metalwork. 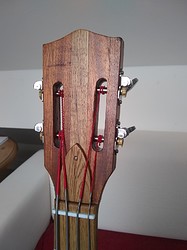 That looks to be quite a project, @jonathanhaynes43 . . .

I definitely bit off more than I can chew.

But through it all, when there was doubt, you ate it up and spit it out!

That’s a hell of a project @jonathanhaynes43 !
Better man than me to take that much on.
Do the strings actually touch the body where they emerge from the bridge and if they do does it effect the resonance/sound in any way?

Damn
… and here i am sweating about routing a control cavity

WOW. No words, what a fantastic job.

That’s amazing, I love the wooden pickguard.
I’m curious as to how you set intonation. Is it a floating bridge?

The end of the body is a smooth curve, so the strings do lay on the body. If you pluck them between the body and bridge they ring like any guitar with a tailpiece. The hollow body has a bassy tone although there is no sound hole, which sounds a bit flat from playing position but is quite sweet if you sit in front of the bass. The string resonance is pretty good (the same as my fretless that has flatwound strings).

Yes, it’s a floating bridge. I bought a 6 string guitar bridge and modified it. It’s the same thing that Hofner use. I was impressed with the layout because I lined up the G string to the scale length (it’s 30") and E, A & D were within 0.5Hz of perfect intonation.

Can you post a picture of how the strings attach at the tail end?