I’ve seen it in my research and mention it as A/D converter cable but have yet to find a firsthand account of its quality. Might even order it myself just to test it out. It’s not that expensive.

Might even order it myself just to test it out. It’s not that expensive.

We have a winner!

Well I’m currently a little bit occupied so that has to wait. I don’t tend do “eh, maybe” orders in advance

@JerryP - Yes… That (well the Rockfish version) is what I started with and used before I purchased my DAI. Still have it as a backup just in case my interface bites the dust. I put together a page (How I Create Music Covers) on my website that shows it. The biggest difference is that with it, you don’t have as much control over input gain, the cable connections can wear out easily, and optional inputs are nonexistent. I’ve recorded several covers using the direct input method using both bass and guitar and have had good luck with mine. It’s one of the most inexpensive means of recording into a DAW for mixing and recording…

Thanks for the feedback @Lanny. I ordered one similar to the Behringer listed above (out of stock).


I’ll give it a try and report back. I want to do some recording while on the road and this looks like it has the portability for traveling.
3 Likes
dprkforum July 1, 2020, 4:52pm #146

I bought my recording equipment on a shoestring budget. Including all the instruments, etc., let’s see…

OK, that was hardware. Then I had to get software to record the stuff.
Ableton Live Standard ~ $300
A ton of plugins that are varied in price, but I got the Waves bundle, Soundtoys rack, and a few others here and there. Although you can go very far with the bundled plugins! I do not even want to contemplate what I spent on plugins. It’s insane.

Tons of loops, premade midi, etc. Those are advertised all over the place. Ghosthack, etc. Those are pricey for what you get, and I am guessing you can recreate a lot of the stuff included. I am lazy, and lazy is costly.

The full version of Analog Lab, plus got a few other standalones as they were released. As an owner of the hardware, I got really, really nice discounts on the new software.

Toon track Superior Drummer 3. That was pricey, about $300. But having a nice beat is helpful for bass, amirite?

Toontrack EZBass. Some love this plugin. I bought it, tried it, and hated it. Articulation is a real pain. It was about $100. I simply opted to buy a real bass instead.

Edit: One more thing. If you plan to record a lot of tracks and use a lot of plugins, you will need a decent computer. There’s simply no way around it. In my opinion, the technology will get better, and more can be done at once. Music recording has come very far, yet has a long way to go. So be prepared to plunk some money on a decent computer CPU.

I read the thread but I’m still left with a lot of doubts, I think I need a ELI5 (Explain Like I’m Five).

I have a Fender Rumble 100. Which has the following outputs 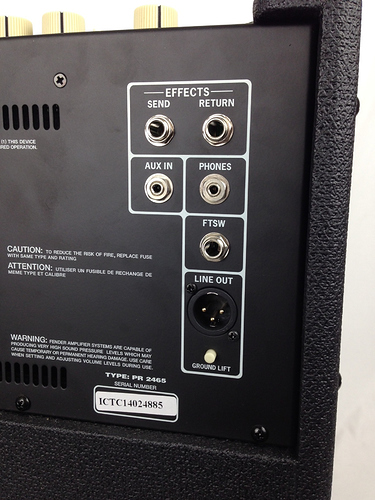 I’m looking into getting a Behringer UMC 202HD or a FocusRite Scarlett Solo.

Read it up there that in case of not having a DI we could use the effects loop. But I have my pedalboard connected there. Can I somehow use the Line out? Or I have to compromise and remove the pedalboard from the effects loop or get a DI box?

So, ELI5 moment, how can I set it up so I can hear what I’m playing through the amp and still have it connected to a laptop which has only one audio socket (those mic\phones combos) usb and usb-c inputs.

I’ve read this thread multiple times and it’s way over my head but I want to learn how to record myself as I see it as a good learning tool to add to my arsenal.
I tried recording myself on my IPhone whilst playing along with a track through my amp but it picked up all the associated noises going on around me ( cockatoos, kookaburras, horses etc)
I’m actually finding my inability to understand quite frustrating as I can usually grasp enough to get by of most things but this is seemingly beyond me at the moment. I’m blaming my brain injury lol.
Rant over

@mac if you want, I can give you a primer in a private chat. I’m no expert, but I can at least point you in the right direction. I leave it up to you. I’m happy to help my fellow bassbuzzers when I can.

I’m actually finding my inability to understand quite frustrating as I can usually grasp enough to get by of most things but this is seemingly beyond me at the moment.

I’m on the same boat!

@mac the simplest way I have managed to record myself was through one of these processes:

Check if this is enough as a starting point for you.

I’ll have a look into this and let you know

I’m gonna try! Although I don’t know about the options of pedalboards/effect loops firsthand. But I feel I understand most of what was said here by now anyway so I’ll give it my best shot.

Read it up there that in case of not having a DI we could use the effects loop. But I have my pedalboard connected there.

Can I somehow use the Line out?

Yes.
It’s basically the same thing for our purposes. I’m not even sure the Line Out is labeled correctly. After researching the topic a bit further - theoretically there are differences but practically you can’t tell by the label on the amp. Just think of the DI as a Line Out.
Just keep your setup as is and get an XLR cable for your DAI. XLR cable from Amp Line out to DAI Input and keep the rest as if you would practice with your usual setup.
And of course you could also just use your usual setup and instead of plugging that into the input of the amp into the input of the DAI. For that you don’t need an additional cable but the first option will likely produce nicer tone overall though.

There are a couple of ways to setup…

But, as mentioned above… use an XLR cable out of the back of the amp, and then into the interface. I use the behringer 404hd and 204hd…they are nice units.

This is easy to do, and you can leave your amp setup the same as a normal practice session.

I also got a 404HD and am satisfied with it. But so far I only used a fraction of the options. Still have to test that MIDI out and more. If you only plan to record bass you can go for the single Input options like Scarlett Solo. I like having options and buying relatively future proof that I don’t have to change or upgrade my gear often so I personally don’t regret the choice.

Hey Mac,
I wasn’t sure how to do the recording stuff either.
The bass buzz family helped me immensely in getting set up.
I did outlay over 2k in gear.
I bought a presonus 24c DAI
I bought an Apple Mac pc, I have normal pc’s at home but I found the recording software very confusing, that’s why I got the MAC , garageband is a simple DAW to use.
If you see my response to @terb regarding the process I used to record my cover, that will give you some options.
As I am local to you I’d be happy to help ya out mate👍
Cheers Brian

One you buy a DAI (the UMC202, FocusRite, etc) you’re all set. The Line Out on your amp is actually the same as a DI. Take the XLR out from that to an XLR in on your DAI that you buy. This is actually superior to using a 1/4" audio cable anyway.

If you get some buzzing or noise on the line, toggling the Ground Lift button will likely fix it.

I see your point regarding inputs @juli0r, will take that into consideration