Show us your Practice Space

I absolutely love my Drumbrute. It’s everything Arturia. Great analog sound, that retro-contemporary aesthetic design, and ingenious detail-oriented design of the thing as a whole unit. Beatstep pro is great. I like to hook my two Behringer clones to seq. 1, 2, and Drumbrute on channel 10, and sky is the limit. Lots of fun. Atm. I am looking around for Arturia monosynth maybe, I really like that company. 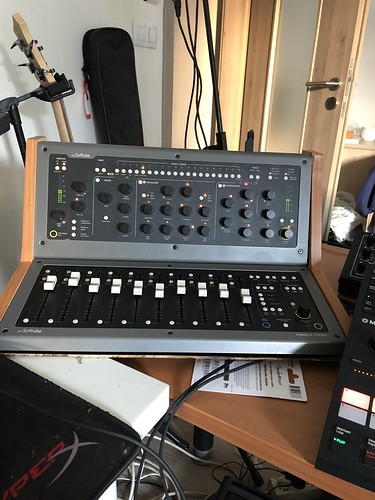 I just finished my temporary stand for these two bad boys until I get it done with hardwood. It’s Softube Console 1 platform and it’s lot of fun if you are in to mixing and sculpting sound. So far, it was quite stable and those few moments it froze it was easy to reset. 10 Motorized faders and gate/exp., Eq, Saturation, Compressor, all emulated as in good old SSL 4000E. Great piece, “recommended” if you ask me.

I’ve thought about getting a controller like this before. I don’t mind tweaking DAW sliders compared to an actual mixer, but it’s just nice to have a tactile interface to it. The motorized part is super cute but i would be fine with software snapping too.

What I really need is something like the Arturia knob bank thing (forget the name atm). I have an Alesis V49, which is a great keyboard controller, but only has four knobs, which is limiting in Phase Plant as it uses up to eight macro knobs for a lot of presets.

The problem for me is I have no place to put it.

https://www.midifighter.com/ … it’s small and it has knobs for days.

I was looking at the SSL emu DAI also, but I love Scarlett preamps and I needed more inputs, but I love the design of that thing.

Yeah I thought about wanting more inputs and midi, but I am doing everything synth and drums related in software these days, and also realized when I really need more inputs what I really want to do is get a mixer anyway.

The thing I was thinking of earlier is the Akai MIDIMix, not Arturia. Quite a bit bigger than the twister.

What about the Minilab? Instead of your Alesis if you need more space? I use my Arturia Beatstep pro & Keystep keyboard as midi controllers or is that a too big of compromise for keys? Before that I used a NI Kontrol M32 midi keyboard which gave me a lot more knob control in Ableton Live. A or S series might even suit you better.

Akai makes good stuff too. I love my Akai MPD218 but I seldom use it.

Oh I love the V49, not looking to swap it out, and want full size keys. I just also want a few more knobs

49 is the minimum for my workflow to stay intact. I went from 88 hammer action from M-Audio (good value/price) down to 61 because of space too and I love how this one is one with Ableton and Novation packed every single midi keyboard feature out there into it and bazillion sequencers. It’s pricey but … you all know it, I guess.

The Twister is great. Every knob is also a button and the footprint is miniscule in context of how many knobs there are.

Howard, btw. have you heard about TouchOSC or Lemur? These are non-DAW specific tablet controllers and for a few bucks, if you have already some tablet, you can create your own control surface. (I am using it with a clamp on table so it’s always at hand.) After using these for some time I have to say that it’s much less gimmicky tan one would expect.

I’m hoping someone posts a photo of their practice space soon so we can get this thread back on topic.

My little corner of my man cave. 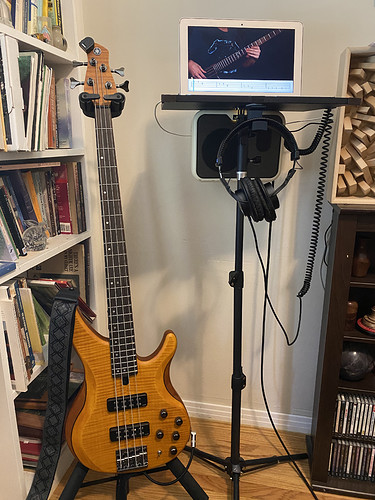 Looks to be more than adequate!

Thanks, I like it because it’s always set up and ready to go. I didn’t want to have to drag things out from a closet or somewhere else each time wanted to practice. It serves me very well.

I checked out TouchOSC a while back as hexler.net is a friend of @Paul and he recommended it

Looks cool! I want physical knobs though. The Twister is pretty much perfect if I get one.

Here is my corner. 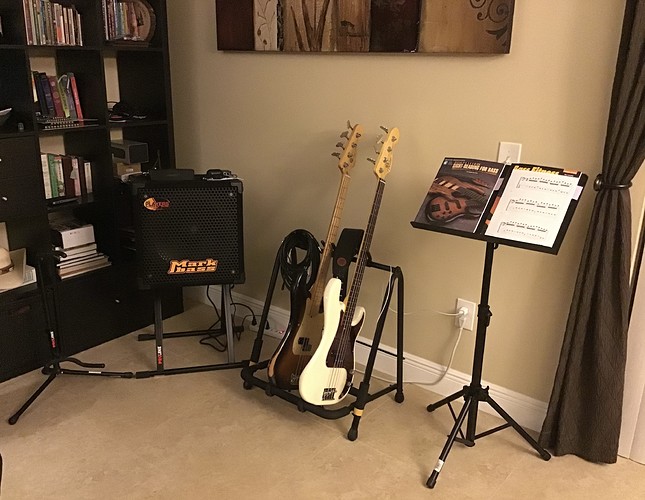 Very nice. I like that stand, how many can it hold?

Very nice. I like that stand, how many can it hold?

This one holds 3. I believe it’s a Hercules.

The 3 can actually hold 5 (you can buy more U brackets and foam dividers very inexpensively.
No pressure…

I had this and moved to the 5 that can hold 7.
They are great stands as you can adjust spacing to accomodate all thicknesses and angles of neck and maximize space.

The Hercules stand is very robust. Would recommend having this one on stage too. Kinda feel stupid that I sold it because I wanted to store 5 guitars. Could have just bought more brackets.