So, You Want To Transcribe a Song

In my 60+ years playing music I have never transcribed a song from scratch SO I decided it was about time I looked into this before my time runs out.

First off, I think a lot of people are confused about the terms transcribing and transposing when it comes to songs.

To me transcribing is taking a song you have heard, and like the sound of, and creating the sheet music for it from scratch. The only thing you have to get you started typically are the lyrics and an MP3 sound file for the song.
Transposing on the other hand is taking a song and changing it to a different key. Usually the sheet music is already available for it.
If I am wrong in this thinking please let me know.

I decided to take a very simple song and transcribe it. The song I picked was Happy Birthday. Can’t get much simpler than that, or so I thought.

Armed with Pencil, Eraser, Manuscript paper, Transcribe and the free open source software MuseScore 3 and an MP3 file I set off.

Six hours later I had the score, with lyrics, finished.

Before anybody chimes in and says why bother with all this, you could just Google this and avoid the aggravation, I have to say that this was not the point of the exercise, the point was to create the sheet music from just an audio file and lyrics.

I realized several things, and learned many more, in those SIx Hours:

1 - You have to take the time to learn the software you are using.
2 - In this world where so many want instant gratification they will never be able to transcribe a song, they cannot find the sheet music for, because you need time, effort and patience.
2 - Transcribing is an art form.
3 - You really need at least a fundamental understanding of music theory.
4 - You start to realize why so many lead and tab sheets are wrong.

I found this experience to be quite satisfying, even relaxing, but not for the faint hearted but well worth the effort if you are willing to put in the time.

I had a request from a student last year to correct the lead sheet he provided for The Night They Drove Old Dixie Down, written by Robbie Robertson and originally recorded by the Canadian-American roots rock group The Band. Initially when I looked at the lead sheet there were so many errors.

Now after my six hours transcribing Happy Birthday I was able to see where the errors were and correct them in about 2 hours. A lot of this time was because of some additional nuances in MusicScore 3 and Transcribe I had to learn.

So the bottom line is, like playing an instrument, you can do it but it is going to take effort on your behalf, time and patience.

For those interested here is a link to a complete free course on Justin Guitar for transcribing music. 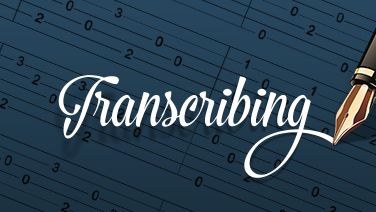 Transcribing is the art of working out songs by ear. Much better than using TAB because it develops far more skills, makes you use your ears and knowledge! If you thin...

I didn’t think there was any question about the difference between transcribing and transposing, but it’s great that you explained it.
The first song I learned by ear was also Happy Birthday, but I never wrote it down, I just memorized it. I play it in the key of F, but it can be played in many different keys. It happens to be one of my daily warm up songs, and also a way to check the intonation on my bass.

Here’s the story of why I learned Happy Birthday in the first place. Nice journey and yes it helps to know your music theory as well as knowing the software.
It has come a long way, yet still I learn something new, almost every time I use Musescore.
If you don’t use it regularly that takes most of my time when writing or transcribing mysic.

I’m getting the same pleasure out of it, but I’ve put mine on hold for a bit while I ramp up my music theory in a course I’m taking.

It has come a long way, yet still I learn something new, almost every time I use Musescore.

I hear you but it is a lot easier to learn than Reaper but hey for the price you cannot complain.
My only complaint with it is that it does crash on me every now and again.

… but I’ve put mine on hold for a bit while I ramp up my music theory in a course I’m taking.

Actually it was your thread that inspired me to delve into transcribing - Thank you.
Which theory course are you taking?

I’ve been transcribing by ear on sax for years (rather poorly).
I don’t do it as a practice, I do it for music I really want to play but I cannot find (which seems to happen often).
It takes me forever and ever, but this is expected given the time I have for it (vs. a music student or pro).
Bettersax.com (think of it as Josh for sax) conducts most all courses by ear to push this at beginners. It really helped.

It also helps you to know as @Celticstar points out if someone else’s transcription is good or bad.

Only yesterday I wanted to learn the very small bass riff to Express Yourself (the Madonna one). It’s a cool simple 2 bar riff, i looked it up, found it (on sheetmusicplus.com no less) and it was VERY WRONG.

So off I go with my ear.
How wrong was it?
Wrong enough that I couldn’t find a note…until I realized I need a B string!

Only yesterday I wanted to learn the very small bass riff to Express Yourself (the Madonna one). It’s a cool simple 2 bar riff, i looked it up, found it (on sheetmusicplus.com no less) and it was VERY WRONG.

What I don’t understand is why people put this stuff out there and think it is good or at least acceptable.

I play a lot of jam sessions and would never just print off a lead sheet and use it without checking it first because there will be errors more times than not.

This is very sound advice.

@Celticstar I wouldn’t say I myself, nor you are complaining.
I like the fact I’m still learning to better use Musescore. Transcribing is not my daily task, I do that ones in a couple of months. I do use Musescore to write down my own songs. That has become easy nowadays, doing that at least weekly if not daily during winter times. And it’s not my dayjob either. I’ve been using Musescore since her start and in that light it, which I should have mentioned, has come a long way.

Yet I haven’t seen a crash with Musescore in a long time. I do know that free diskspace, memory space and how you handle windows swapfile played some role in the past. I have optimised that for my work, which stopped the crashing of other software, like for example Musescore, as well.
Oh,and I don’t use, or very scarsly, the sound play optionnof Musescore: I use midi and a connected synth for that.

I quit using Musescore long ago due to all the tragically incorrect scores I’ve found on there. They just charged my card for a renewal (which I wasn’t expecting) and now I’m in the dispute process. I don’t recommend MuseScore at all.

To bad for you, Pam.
We’re talking about the software to make scores. Not de website you can store and share your scores, for which you have to pay. They are related but not the same.

I used this when it was free on sax until the scores got so bad it wasn’t worth it either.
I remember very early on bringing some Musecore music to one of my very first bari lessons, a Tower of Power piece. The guy just put a big X across it and said ‘nothing is right here’.

You get what you pay for…Free is free.

We’re talking about the software to make scores

I wasn’t aware there even was a Musescore software. I use Crescendo myself, but haven’t ever discovered that one.

Yeah Musescore’s software is actually nice. I liked it when i tried it.

I just installed Musescore software and will give it a look. However, it would have to be light years better than Crescendo to get me to make the switch and have to learn a new software.

It probably won’t be. It’s decent for a free app though.

Of course the first piece of sheet music I looked at in their repository was wrong, though

Of course the first piece of sheet music I looked at in their repository was wrong, though

As long as the errors were not a result of MuseScore software issues.

When I transcribed Happy Birthday I followed the teachings in the Justin Guitar transcription course mentioned in the OP ie. note by note.
I think that errors in the posted transcriptions are a result of people’s impatience.
Transcribing is not easy and is very, very time consuming but, to me, was very satisfying.

Next step will be to get a midi keyboard, to make input easier, and see how that goes.
It appears I need at least a four octave range but I would appreciate any ideas on how many octaves I should consider and possible models to consider.

Which version of Crescendo do you have?
Did you purchase any of the Bundle Packs for it?