Ok said I was going to do this…mainly so I dont clutter others threads for my love and adoration of my bass idol, and the main reason I play bass today.

Steve Harris hooked me into Metal back in 1982 with Phantom of the Opera. Been a number 1 Iron Maiden fan ever since. His percussive way of playing, speed, and precision has always left me in awe.

Just saw British Lion last night. I was right up front and MAN!!! Steve is just an awesome guy. To just finish a full world tour with Maiden, then get with these guys and tour the US with them. To be not only willing to play small venues (there were maybe 150 people at this place last night) and to be just as energetic and really show the love of his art no matter where he plays is a testament to a true artist.

One of the best pictures I took last night! 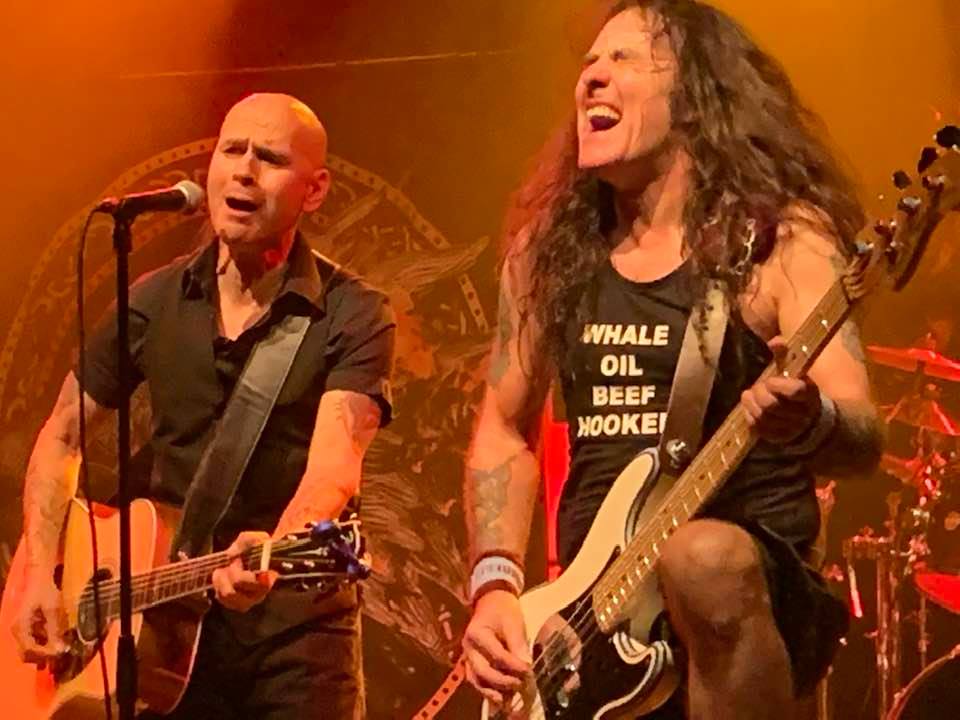 Give British Lion a listen…these guys are great. And after seeing them live…the band can carry its own even if Steve left tomorrow. Im shocked they arent playing arenas yet.

By the way Steve’s shirt say “Whale Oil Beef Hooked”. If you say it quickly it sounds like an Irishman saying “Well I’ll be fooked”… LOL…

And British Lion has released their newest album in its entirety on YouTube here:

And of course…My favorite Iron Maiden song… FEAR OF THE DARK… the chords Steve plays throughout the song just sets the tone of apprehension this song is trying to convey to the listener.

So what is your favorite picture, video, song of Steve’s??? Feel free to post!

To just finish a full world tour with Maiden, then get with these guys and tour the US with them. To be not only willing to play small venues (there were maybe 150 people at this place last night)

Him and his mrs have fallen out is my guess, so all is not well within the home . . .

Only joking. It’s a real treat to see someone you admire like that, in a small intimate venue.
It’s happened to me once or twice, and it really is a special and memorable occasion…

To just finish a full world tour with Maiden, then get with these guys and tour the US with them. To be not only willing to play small venues (there were maybe 150 people at this place last night)

Him and his mrs have fallen out is my guess, so all is not well within the home . . .

Steve has actually been mentoring this band since the early 1990’s… but on the albums (released in 2012 and now this one in 2020) he has played with them.

By the way Steve’s shirt say “Whale Oil Beef Hooked”. If you say it quickly it sounds like an Irishman saying “We all be fooked”… LOL…

Hahahaa thank you for explaining! I’ve seen him wearing that shirt so many times and been like WTF???

I’ve been checking out more recent Maiden albums lately (Book of Souls is good!!!), but my fav will always be Powerslave. Never get tired of playing along with this one -

No doubt Josh… I always find it hard to pin down my favorite Iron Maiden song or album. But would have to agree Powerslave is definitely one of their top 3 in all my counts!

And Losfer Words wow the driving bass line in this song is so good! And how Steve just compliments the guitars… man he is just awesome!

Just got the latest issue of Bass Player magazine in the mail today - Steve Harris is on the cover and the featured interview! Haven’t read it yet, but will soon!

I’ve liked Maiden since the 80’s, Harris’ galloping style is really style distinctive. Oddly enough I was listening to Powerslave today and I asked myself is he slapping on “Los’fer words” ?
I looked it up and I guess not

is he slapping on “Los’fer words” ?

He said so in an old Guitar Player mag interview… they pulled this page from the site (stupidly, IMO), but thanks to the internet archive you can still find it here: https://web.archive.org/web/20190421222524/https://www.bassplayer.com/artists/steve-harris-running-free

Nope Steve definatley does not use slap.

This guy has about the best Iron Maiden Steve Harris covers, as well as 14 videos going into how to play like Steve. (well best covers maybe except for @JoshFossgreen whom Im still waiting to hear this great Powerslave cover he did according to some in the forums) .

He plays in a very well known Iron Maiden cover band in France (Made of Iron)…and the band kills it! The lead singer reminds me of the first lead singer Maiden had (Paul Di’Anno), but can get close to Bruce vocals as well.

I found this very interesting. Im constantly trimming my nails to avoid the clicking… if I ever get to playing Harris tunes (and GOD I hope I do!) I will have to keep this in mind.

“Eyes of the Young” has an almost pickstyle attack. Are you playing with your fingernails on that one?

Yeah. Because the album was recorded over a long period of time, I had the option to trim my nails short for some songs, and leave them long for other songs. With Maiden, we do backing tracks for an album within a week or ten days, and I tend to leave my nails long for that.

Josh - Thanks for the link

Interesting to see he has a different (to a noob like me) physical way of playing that gives him that sound.

It’s pretty interesting seeing this plucking technique, and why this translates to Steve Harris playing so blindingly fast! Pretty badass he has to give some blister prevention techniques there in the end

Here’s an old Josh video, at about 8:30 he gets into galloping with 16th notes, and how to do it. It’s how I started watching Steve Harris more closely. Galloping on the bass is so much fun, I just do it randomly sometimes, lol!

I do this accidentally naturally and I am trying to stop

it sounds awesome but I want to be able to control it better.

For me it happens because my natural plucking style is slightly downward onto the string. You can probably emulate his style really easily!

Im workin on it!!! I have a long way to go, but hopefully I have many years left to learn!

I was going to put this in the “A Little Music Related Fun” thread, but then I realised it’s audience is here. 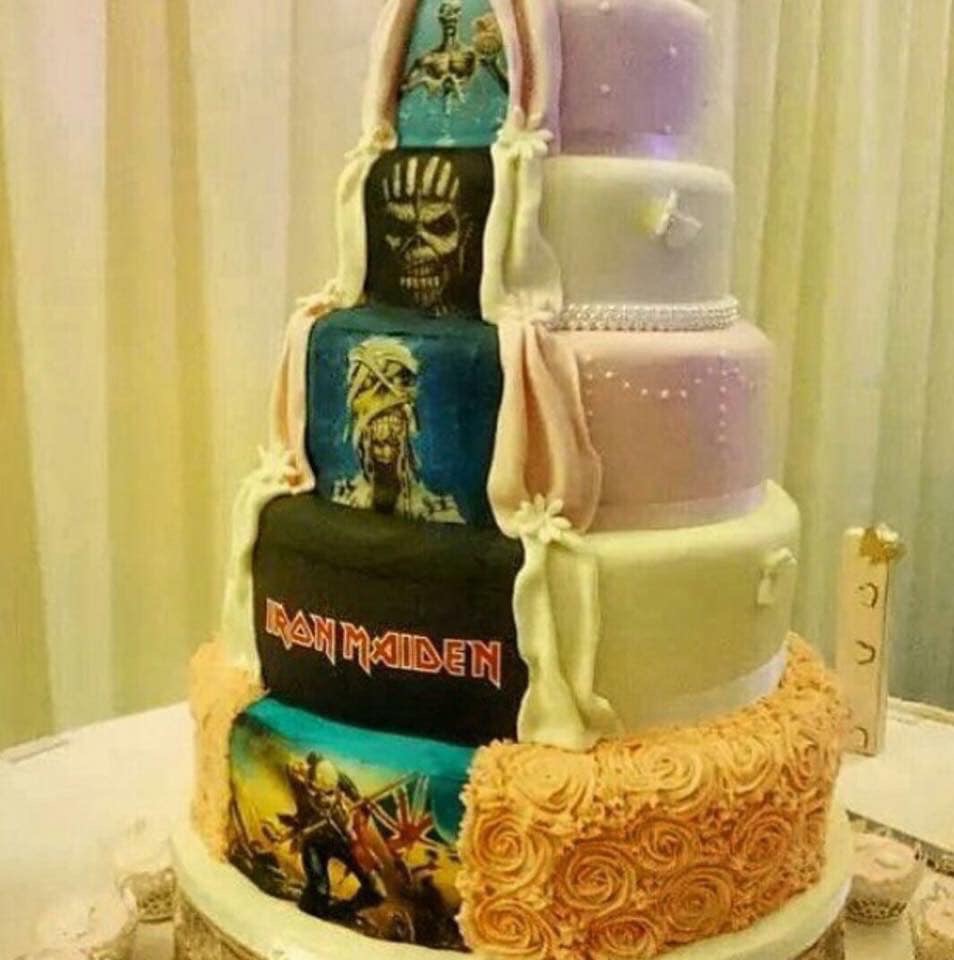 Wow…that looks like a wedding cake! Man that would be cool to have a spouse as much into Maiden as I am!!

I believe this guy is a pal of Steve Harris. 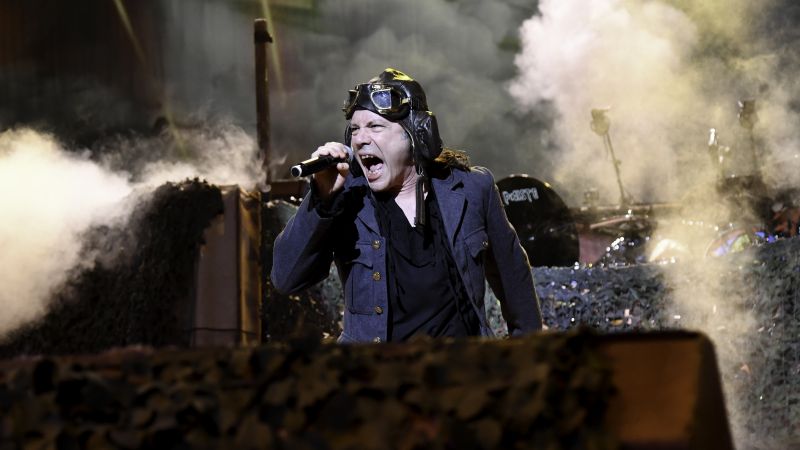 Bruce Dickinson was enrolled into the service on Monday and could compete for the Royal Air Force Fencing team later this year.

I’d love to say they are making Steve an honorary ‘bomber’ but that would be the wrong band - then again, during WWII the RAF had ‘Bomber’ Harris so you never know…