If you guys really want to feel like you are in bizzaro world go to their forum.

I was just on the forum section of the site and noticed that most of the threads were started by the Trusty Harmonica Teacher and that he is also in just about every answer to questions being asked.

Agreed there is not a lot of activity on the forum but maybe it will pick up, especially if they are new.

It almost seems like a franchise type of thing to me.

It’s a great idea. People on here are always asking for “the b2b of piano” or of guitar or any other instrument. They have a winning format to follow. Hardest part will be finding the perfect teacher for each one. The format is easy to duplicate, Josh is not.

@BassFaceDisgrace Keep your eyes peeled for Beginner to Beethoven! 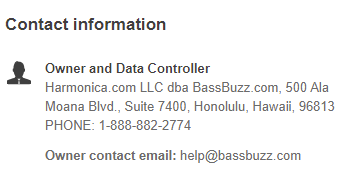 from the BassBuzz privacy link. So, literally the same company.

Here is some additional information from the Better Business Bureau

This is a multi-location business. 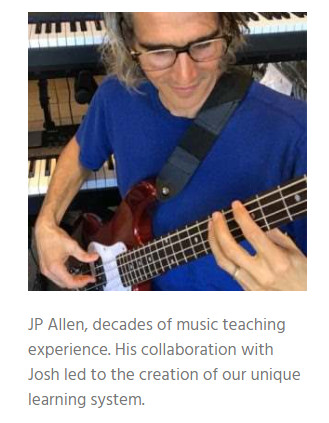 I wonder if this has anything to do with why we have not seen an Intermediate course on Bassbuzz, that so many have been waiting for, and given up on in many cases, for so long.

I think it is this, this guy JP Allen has developed a business model/platform and signs up Josh’s of the world to build out content in a shell that is pre-built. He fronts the $$$ and development, wannabe instructors provide the content. It’s like finding teachers for a school vs. the teacher having to figure out how to build the school.

OR, this is Josh branching out in this business venture as well and he’s busy doing this instead of making Volume 2.

I think him and Josh are business partners…

It’s all fair and square - if you have someting that works, why not reuse it for a different/related purpose!?

What irks me is this Dan character… I mean, I signed up because Dan could get from zero to hero in a few weeks, and if he can, so can I! Right?

Well, it turns out he is a freak of nature… this guy can apparently learn ANY instrument in a matter of weeks without any prior knowledge! Wow!

I am guessing you can nail a harmonica and ukelele and get a superhero cape too.

I have a harmonica and always wanted to learn.
Actually have a uke too!

I have a harmonica and always wanted to learn.
Actually have a uke too!

I initially took up the Bass for the same reason I took up the ukulele. Two less strings and the same fretboard layout as the 6 string at lest for a Baritone uke. So I figured chords on a Uke would be a breeze and they are. For example, a C chord on a Soprano, Concert and Tenor Uke is only 1 finger on the third fret of the first string.
I learned that the Uke was the perfect fit for things like playing campfire songs and improv sing-alongs and is a lot smaller than a jumbo or standard sized guitar, or even an acoustic travel guitar for that matter.
To me the Uke is primarily a rhythm instrument, but can be used to solo, but most players don’t, so the bottom line is you can play complete songs without any accompaniment at a sing-along.

I found the Bass to be a different kettle of fish altogether.
Finding, fretting, and playing notes was a breeze BUT playing chords solo to a song does not sound as good compared to the Uke, probably because a lot of the chords on Bass woud be played as power chords IMHO. I discovered it was not really something you could use by itself at a sing-along. Sure you could play the melody line up the fretboard but it would not sound as good without filling in the rhythm with some full chord tones.

This was the reason I started to look for a harmonica course. My plan was, and still is, is to use it primarily in the same fashion as the ukulele ie. as a stand alone rhythm instrument. Of course the problem is you can’t play harmonica and sing at the same time but at least I will be able to play a complete song and listeners will know what I am playing, assuming they know the song of course.

That is how this whole harmonica thing came about being.

Don’t get me wrong, so far this is the best site I have found for learning the harmonica but I just pulled back a little when I saw the site similarities and wanted to see what the deal was.

Funny enough the ukulele course site is not structured the same.

@Celticstar are you planning on camping in British Columbia with your harmonica any time soon? Asking for a friend

Had a look over the site and found another interesting thing. The harmonica people have an intermediate course:
https://www.harmonica.com/blues/

Basically lessons for Blues Harmonica. But it seems it’s made by another teacher.

Hey gang! There is no tomfoolery or shady shenanigans happening - Harmonica and BB are part of the same small business! JP started the harmonica business a long time ago, and they brought me on to start a bass brand with them, which is where BassBuzz was born.

Harmonica got a facelift recently, and we copied design over from BB, with some tweaks.

Luke, who’s the new face of Harmonica, is a great teacher and a nice guy, if anyone wants to learn harp!

EDIT: And regarding Dan - I swear he’s a real person, who we really used as a guinea pig for both courses. There’s not a lot of cross over between bass and harmonica skills, which I can prove any time with my harmonica playing.

Awesome, figured it had to be something like that.

Thanks for setting the record straight. I’ll be able to finally get some sleep tonight! LOL