so, this thread is a tutorial about the Boss ODB-3 mod, with some comments from my different tests.

First, here is the beast : 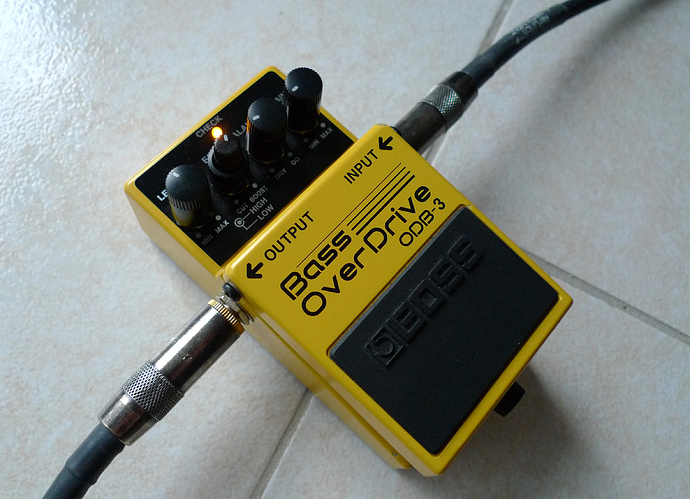 This the only Boss overdrive pedal, and it seems everybody is ok to say that it’s not a good one. In my opinion, the biggest problem with this overdrive is that … it’s not an overdrive. It sounds tiny, like an overdub of a thin tiny treebly layer stacked over the clean tone. Plus it’s noisy as hell (I assume hell must be noisy).

There is a common mod on the internet for this pedal. I tried various things but I ended up with this common mod, simply because it works well.

So I want to be very clear about the fact that, despite my tests, I’m not the inventor of this mod ; I only explain and comment an existing mod.

What to expect with this mod ?

Here is a quick sum up of what you will obtain with this pedal, after doing the mod :

Overall, with my gear (Precision Bass / SVT-VR model) it makes me think about some kind of vintage version of the Darkglass tone.

Let’s do the mod

The mod is very simple, of course it requires a soldering iron and the matching skills, but there are only a few components to change :

When the pedal is open, here is where to find those components : 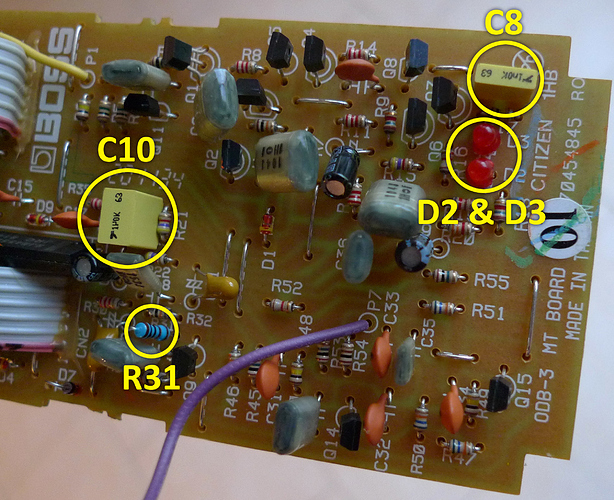 and that’s it. after you changed those components, you just have to close the pedal and go try it.

The D2 and D3 diodes are clipping diodes, they force the signal to clip with a relatively low actual gain. that’s a good way to design an overdrive, and the diodes play an important role in the final tone as they actually “create” the clipping.

LEDs (like on the stock ODB-3) bring some kind of smooth, natural clipping but still pretty agressive. changing D2 & D3 with 1N4148 will bring more headroom, a little bit warmer tone overall but still something pretty close to the LEDs. 1N34A are germanium diodes, they will sound much warmer, more “vintage”, but less precise and accurate.

Of course you can try other diodes, like 1N4007 or Schottky diodes. The general idea is that you want each diode in opposite polarity to clip the two opposite phases of the signal. But you can mix diodes (like one 1N34A and one 1N4148), or you can even have one diode to replace one LED and replace the other one with tho diodes in series. A lot of possibilities.

I myself tried a lot of things, and finally decided to keep the red LEDs, because I wanted to keep that agressive clicky metallic edge. I found that 1N4148 were not very interesting, and 1N34A sounded very good if a more “vintage” tone is what you’re looking for.

Seems a natural to expose them for cool effect.

that’s very, very common on overdrives ! and yes, when the pedal is open you actually see them blink with the signal

I had no idea, how cool

one idea would be to use a dual color LED in place of the ON/OFF LED : one side would be connected normally with the ON/OFF switch and the other would be connected exactly like one side of the clipping LEDs circuitry. it would make the status LED be ON when you activate the pedal, as on every pedal … but the LED would change color when the overdrive would clip. it would work. 100% useless, 100% fun. (I’m not at all into those fancy stuff, but yeah, it would work)

What we need is someone with a 3D printer to make a replacement transparent case! Would have to be tough!

I will never attempt anything like this… not even close! But I like to hear and read about these endeavours from people who know what they are doing

it’s really easier than what you may think, @joergkutter ! in this case at least

Well, I had sweat running down my back when replacing the pots in my P-copy with a pre-wired, no-soldering(!) replacement harness

it must be some kind of phobia

Great job @terb! Thanks for posting this. You do nice work.

I was looking for a reason to try some pedal mods…I’ve been kicking it around since I started watching the JHS Pedals channel on YouTube.

Definitely going to find one and try this

great, it would be cool to have your opinion after you do the mod.

you’re right about the Schottky diodes, they would bring a very early clipping.

If anyone wants some detail on diodes and clipping for effects etc: 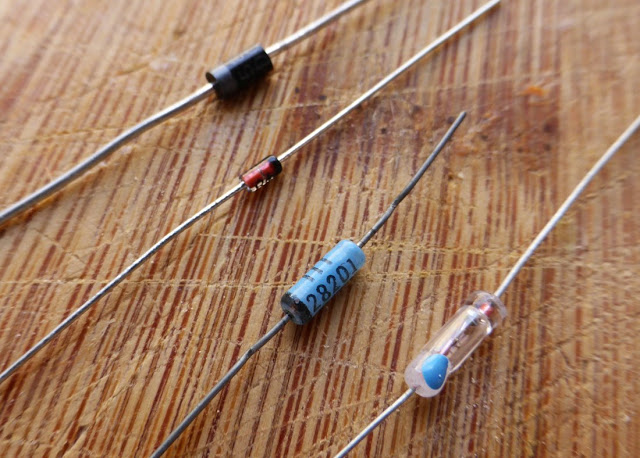 yeah @Mark_UK , thank you very much for this addon. it’s great to say that the LED voltage drop change depending on the LED color, that’s another way of fine-tuning.

if you want to listen to the modded ODB-3, here it is.

I think it sounds great now. Definitely much much better.