Song 7 - "House of the Rising Sun" by The Animals

I’m looking forward to this one. Classic song for me personally! Never learned it though, so lets see how it goes.

For a backing track with bass removed, join the Discord or contact @gcancella

Here’s my take on “House of the Rising Sun” The Animals
also like Eric Burdon & War (Spill The Wine). Sure this one he wrote with War. Back in the day.

House of the Rising Sun The Animals on Vimeo

Here is my submission. I found this song difficult for some reason.

Nice work @BigAl and @Ruknrole enjoyed both renditions. This is going to be my equivalent of @John_E and his Bad Moon Rising. I disliked this song as a child, I loathed it as a teenager and as I roll up on 50; my ambivalence to this bloated, self indulgent, nonsense hasn’t changed. It’s even got a bloody organ in it, which is only one misstep away from the accordion. However as my mother told me to eat my vegetables, that’s what I’ll do. This song is rubbish but in the spirit of the challenge I’ll get on it and produce something.
However just like a sulky teenager, don’t expect me to smile

Great Job @Ruknrole.
Killer tone, how did you get it?
Great timing, etc

I feel ya on this one too @Barney.
4:28 long might make this one my new Bad Moon Rising too!
I am hoping to phone this one in quick and focus on a cover I’ve been working on.

One thing I love about this song (and the era it was recorded in) -
Measure 90, the bassist plays a real strong E when the band goes to the C chord.

He recovers quick, and (thankfully) the E is part of the C major chord, so it sounds OK down there…

But at no other point in the song does the bassist play anything other than the root of the chord on the downbeat.
It’s a flat out mistake.
BUT!
I think I read the story that they recorded this early one day on tour, after playing the night before, before moving on to the next show. It was a hurried session (like they all were) and very live, and if you get a good take from the band (and more specifically, the vocals) you keep the take regardless of if the bassist makes a wee mistake or not.

And that’s the epic, legendary recording. Bass clam and all.

These little moments always help me in a show or session - the vibe! The groove! The take! Make the mistakes so long as the vibe and groove are nailed!

I like We’ve Got To Get Out Of This Place better, but Eric Burden is flat out one of the great rock singers. After this he went on to funk rock with War.

And the Animals used to cover Nina Simone, and it doesn’t get cooler than that.

Thanks @John_E.
Just playing my Fender P Bass, adjust tone knob to taste, and then play a bit with the EQ and Compression VST plugins in Reaper until I get something what sounds good to my ears.
I used a pick on this one.

@Barney … thanks for the honesty but no matter the song, whether you like it or not, I have only and can only think of you in one light…having fun and killing it /!\ as seen in the pic below. 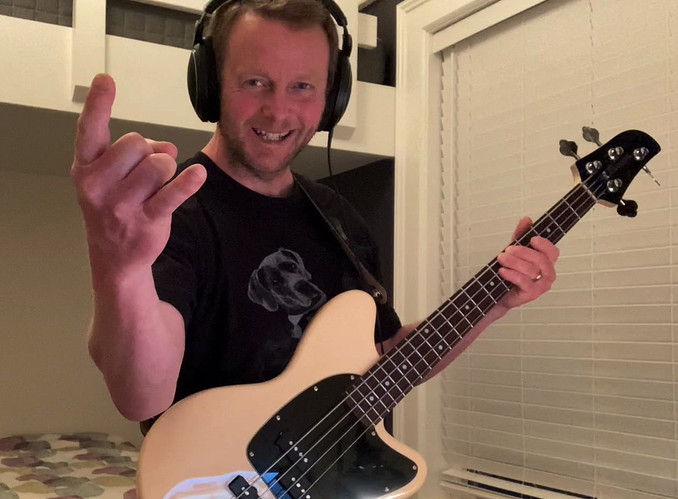 ROCK ON my friend!!

I haven’t listened to the submissions yet, hopefully will have some time later.
I gave it a first look today, much harder than I anticipated!

Cant wait to see @Barney submission, down face and all sulky.

Well I ate my vegetables and did the song. Just like eating vegetables, I know they’re good for me so that’s what I did. Apart from watching all of your future efforts on this forum, If I never hear this turgid meringue of a song ever again; I’ll be very OK with that.

Hopefully you enjoy the next one more, but I’m glad you did your homework regardless.

Awesome video editing too. One of these days I’ll try something like that…

Well done Barney, @Barney ,
Your a better man than me,