yeah as some of you already know, I’m a pick player. don’t know really how to start this thread but I may probably have an answer to your pick technique question, so, just ask here !

So, just downstrokes or up/down? I learned “just down” but I think I like up/down better. They sound kind of different.

yeah, it depends. I think you really need to master the two techniques. the all-down technique is way simpler and sounds more constant, more punchy overall. it’s the technique that works all the time. it’s the “easy” rock thing.
the down/up technique is really a guitar technique, it requires a very particular skill. I like this technique (that’s what I do almost all the time) because it sounds very “wavy”, it has a very distinctive groove. you may like it or not, I like it.

in the context of a song, I very often mix the two techniques but my standard thing will always be the down/up, it’s just less tyring and it allow me to play a lot faster while keeping a real agressive attack/punch with the pick. just my “standard” groove.

here I talked about what I do, but also I would make a parallel with the bare finger plucking technique. the base thing is to strictly alternate, that’s what Josh teaches. you have to learn to do this (as I have

) and then you can give yourself some liberty about all that, find your own plucking sequence that will maybe not be a strict up/down. that’s fine, it’s a great way of musical expression, you all fellow 'buzzians have to find your thing. but you have to start somewhere and this somewhere is the strict alternating plucking / the parallel picking thing being the strict down/up picking.

time to close the parallel. I consider that the all-down technique is a pretty straightforward technique but you should use it really when it’s appropriate, and before you use it I think you should master the down/up technique. simply because that’s the pick equivalent of alternating. I know it’s not easy at all when you’re not used to it, but well with some practice it will work

also the all-downstroke will put a limit in your picking speed. might be a problem, or not, depending on what you play. for me, as an example, it would be very limiting. think about that

to sum up : between all-downstroke and down/up, it’s not a choice really between what you have to work. if you choose to play with a pick, you just have to MASTER all these two techniques.

also I’ll start some kind a sub-thread here : show me your picks ! it says a lot

I was going to ask about this too. I just have one and it’s a generic guitar pick. Any recommendations? 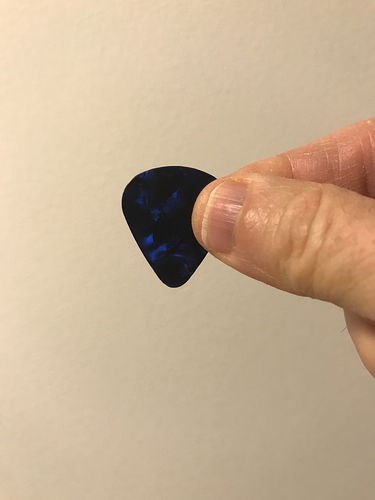 Edited. Generic guitar pick I got for free with some strap locks I no longer use

oooooh yeah I have a lot to say. show your pick and I will talk around this

might be boring (?) but I’m not writing a book and so I need some starting point !

there are two very important parameters with a pick : the shape and the thickness. here @howard you show a standard shaped guitar pick but we don’t know the thickness.

which are very very small and require a very precise picking technique). this kind of pick may feel really small with a bass. maybe you could try a wider “triangle” shaped pick which is more standard for the big strings of a bass.

at some point when you’re starting with the pick technique, it’s not a subtle thing. a big triangle pick is great, you will pick with violence and hate, that’s what rock is made of

also the thickness is very very important. for example at this time I’m using a 1.14mm width pick, and I feel it’s just a little bit too much (for me / my feeling / my attack / my picking technique / my bass / my string gauge … don’t try to transpose this to you !). no rule really here, just get a pick of each width, try and see what work for you.

well, all the other 'buzzians ! show your picks and we’ll talk !

Yeah my pick there is definitely sub-1mm. Even I can tell I want a thicker pick. Love the color though

I just grabbed this:

Looks like a good set of different thicknesses and plastics to try. A few jazz picks in here too. Not the cheapest (~$7.50) but not bad. 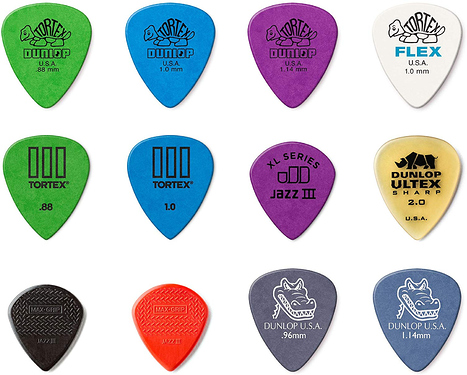 Another question - strings for picking. I feel like medium or heavy gauge strings would work better than lights. I have regular lights now (0.045-0.100) and the tension does not seem ideal for picking.

My next set are going to be mediums but I am not in a hurry to change (yet). @terb what do you think?

Edit: I wanted them anyway so these are on the way:

I use jazz picks

I heard someone mention a “felt pick” the other day… what are these?? I guess they are much softer!? So, like using brushes instead of sticks on the drums (kind of)??

One of the songs I did with some guys I was playing with last year was ‘Blitzkrieg Bop’ by The Ramones. I did the Dee Dee Ramone all downstrokes to make it as authentic as I could, and I found it far from easy. In fact it was killer.
It just didn’t sound right with alternate down and up strokes though.

I heard someone mention a “felt pick” the other day… what are these?? I guess they are much softer!? So, like using brushes instead of sticks on the drums (kind of)??

as far as I know, those felt pick are used with ukuleles. the strings are made of plastic/nylon and are much softer than bass strings ! also fur ukes, there are rubber picks which feel pretty soft, I have two with different softnesses : 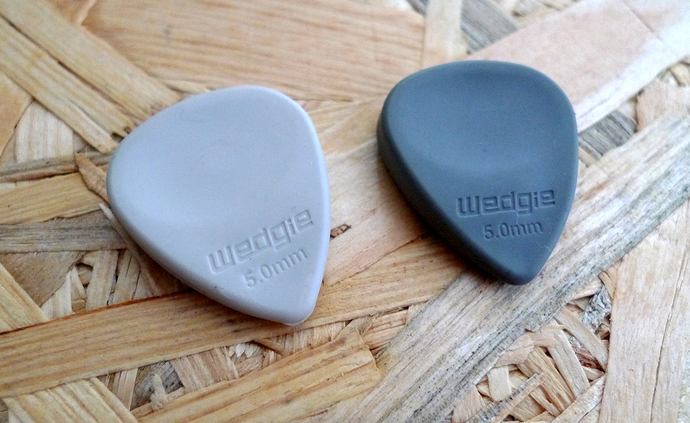 I never tried with a bass but I will

Another question - strings for picking.

yeah the string tension is pretty important, it changes greatly the playing feel. heavier strings will have less “rebound” and be easier to play fast but they also will be more tyring. you have to find what works for you ! but as an example Greenie is strung with very light strings (40/100) and it works not so bad even for fast picking. heavier strings are not an absolute need.

all downstrokes to make it as authentic as I could, and I found it far from easy

yeah it can be challenging especially if you play fast !

How come your English is so good terb?
It is really excellent.

When playing covers - which is all I do at the moment lol, I try and do what the original artist did - ie if he/she played fingerstyle then that’s what I do, and ditto with pick, which seems rarer.
I use Jim Dunlop Nylon 1mm and they suit me fine for the moment.

How come your English is so good terb?
It is really excellent.

thank you very much ! but I don’t feel confident at all with this

thank you very much ! but I don’t feel confident at all with this

Well you should. Nobody would suspect you were not from an English speaking country.

He’s right, your English is great. Of course as an American my English is terrible so take my compliment with a grain of salt.

I’m honestly surprised but you must know better than me

I’m honestly surprised but you must know better than me

The English spoken on these forums by the non-native English speakers is astounding. I hope others who aren’t as confident get involved rather than worry about how good it is. As a Brit I’m aware that one of our greatest failures as a nation is our terrible secondary language skills: sure, we gave the world a wonderfully expressive language (well, we borrowed most of it to begin with) but we stopped around the 17th century. At 51 I still consider a second language right up there with learning a musical instrument as a life goal. I won’t assault anybody with my French skills, but I never starve when visiting France.

Interestingly, much as Brits love to make out that Americans don’t speak the language properly (mostly because of the spellings), it’s been shown that it’s actually British English that has changed most and Americans still use the older spellings.

Sorry, I was bored and stumbled into a conversation about picks. I don’t use a pick at all.