I was looking for something on my computer and came across this photo of my Lucy. I had just received a set of motorcycle tires that I had ordered, and she leaped into them and posed for a photo. Too cute not to share. 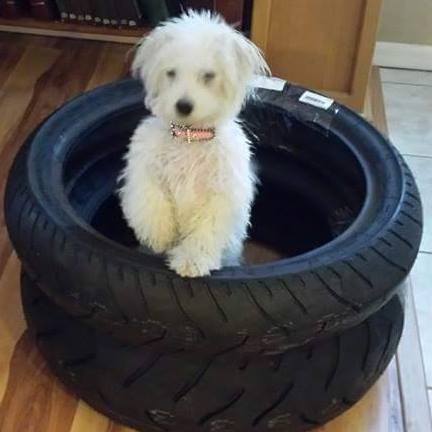 Speaking of posing for a picture: 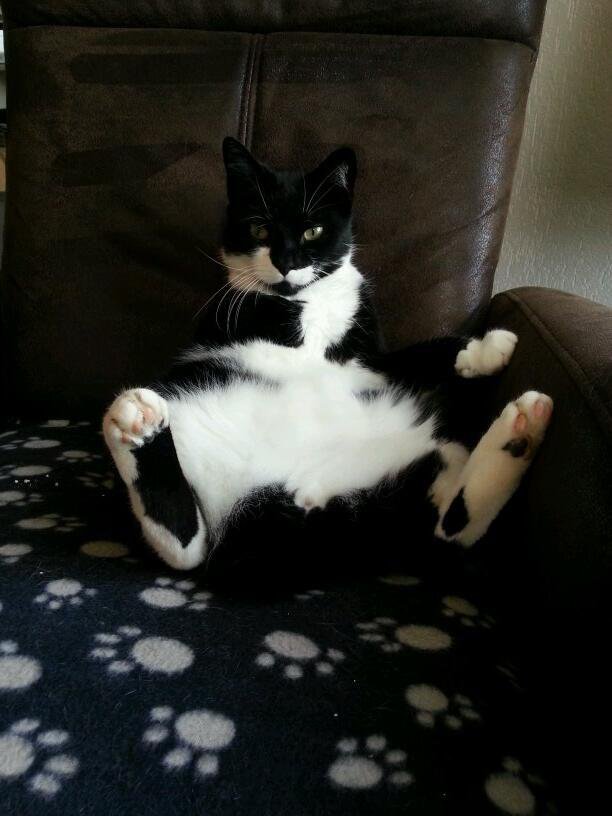 @peterhuppertz that is waaaaay too cute

Oh… well if there’s a thread for it I guess I don’t have to hold back as much anymore. At least in here.

My two cats are named Luna and “Schneeflöckchen” (called Flocke). It means little Snowflake but doesn’t have a derogative meaning like the translation would have. Luna was named by my girlfriend and Flocke by me. She crawled up to me as a little kitten and was just a little white ball of fluff.
I accompanied my girlfriend because she wanted a new cat after hers died and she had a sufficient period to grief. She said it was to help her reign in and not make a bad decision. Then this little ball of fluff crawls up to me. End of story was me saying: “Let’s take two?”
Here’s the whole litter: 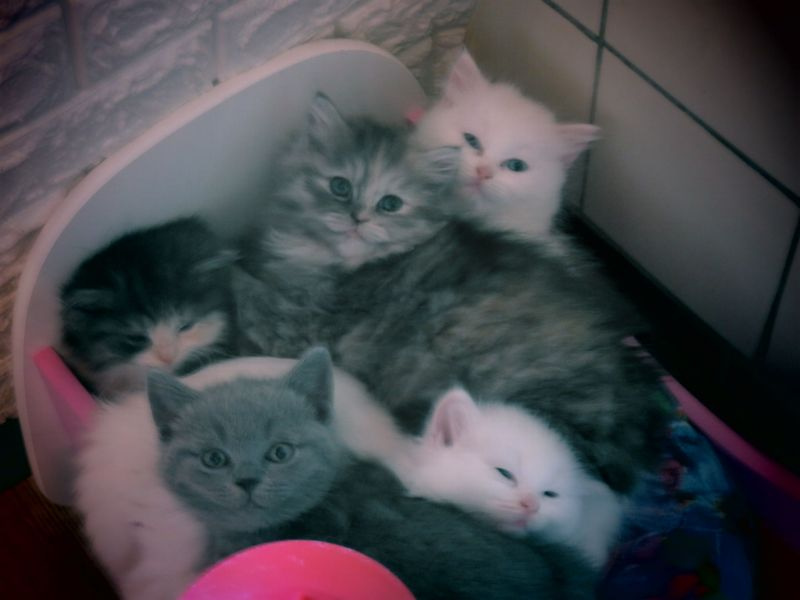 Sorry for the bad video quality, but here I play with them when they still were kittens:

As easy or even easier to amuse as an adult cat:

And of course my profile pic in full size: 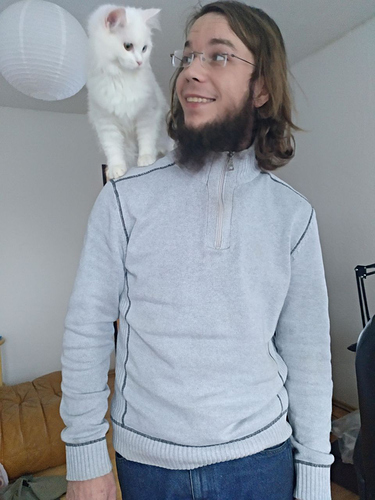 She still likes being on my shoulder but she is a little bit bigger by now and heavier and usually I have to lift my elbow and she lies down on my lower arm and shoulder.

@juli0r I meant the cats btw, don’t let my compliment go to your head

Oh no worries there.
I have a healthy amount of confidence but I’m not delusional or something

Also “adorable” technically is a compliment but from a potential love interest it would not feel like one. It’s a bit infantilising. Not that you are one. Don’t let that go to your head 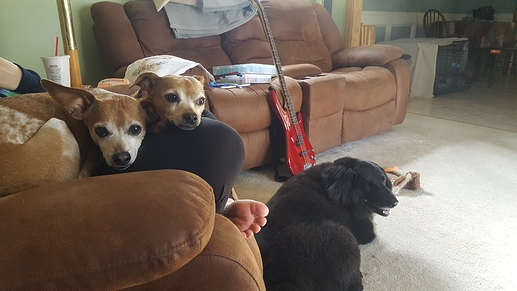 20200502_1700163264×1836 1.32 MB
This is our pack. Harlee is the black dog on the ground. She is ours and we have had her for a little over 10 years already. The two little ones are fosters. Our friends who are still in the Navy are stationed in Japan for three years or so and bringing the dogs overseas and back again is possible but problematic. Rather than do that to the dogs, we get to love on them for the time being. All three are incredible dogs, all really well behaved. They bring constant joy to my wife and I. We never expected to be little dog people, but these two little guys proved us so wrong, they are awesome (but break to easily). 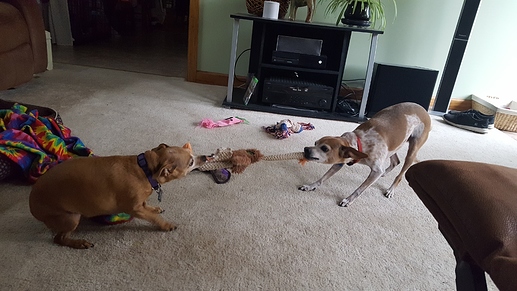 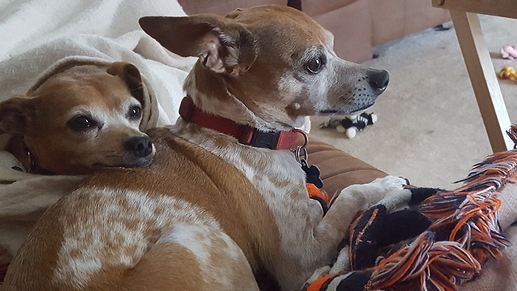 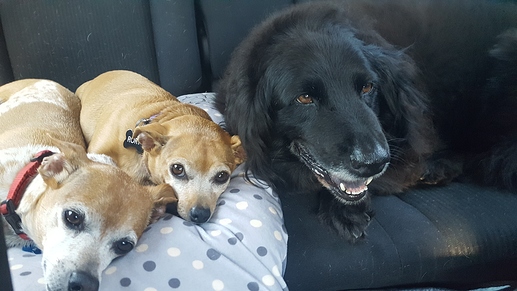 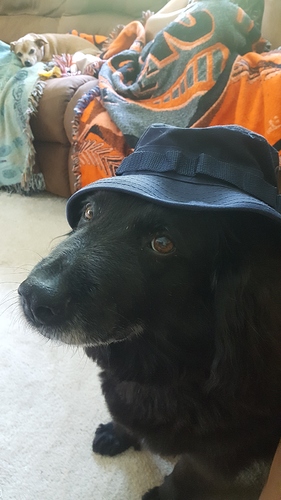 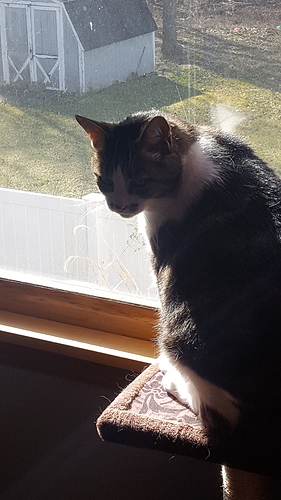 Very cute. All of them. Although the cat looks a bit angry I guess… Does she have colored spots that look like a moustache of sorts?
Let’s also please just appreciate each others loved pets and not make this a cat vs. dog thing. It’s as bad a topic as pc vs mac or religion.

So thanks for including the cat I guess

I like all of them. @PamPurrs little cute fan. @peterhuppertz Calico and your whole pack and the cat @BassFaceDisgrace 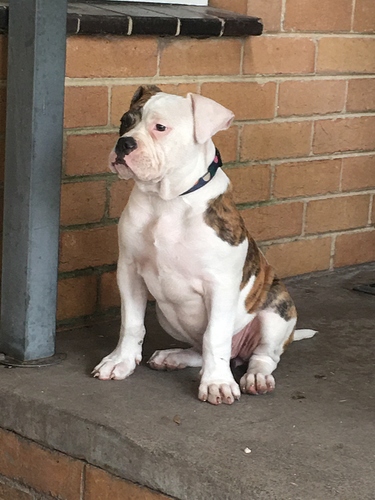 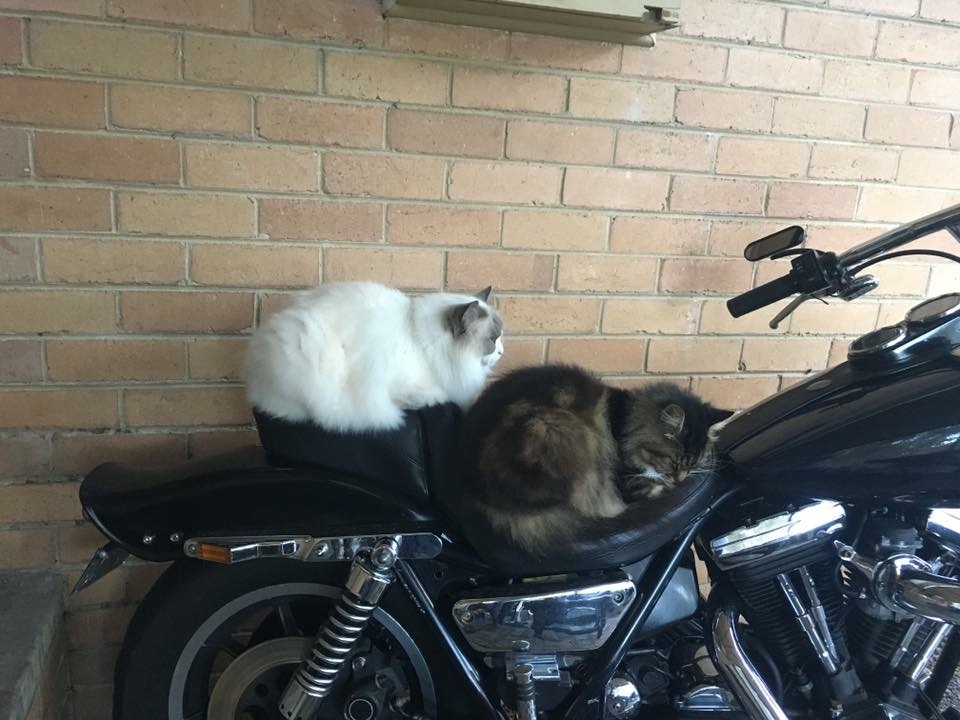 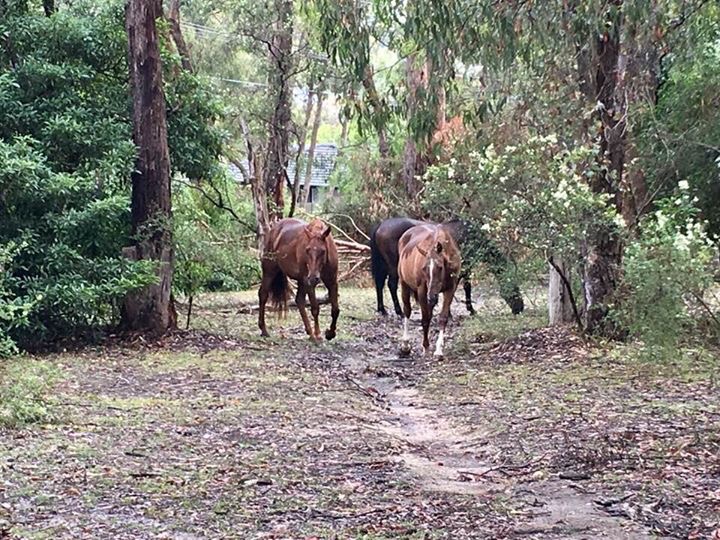 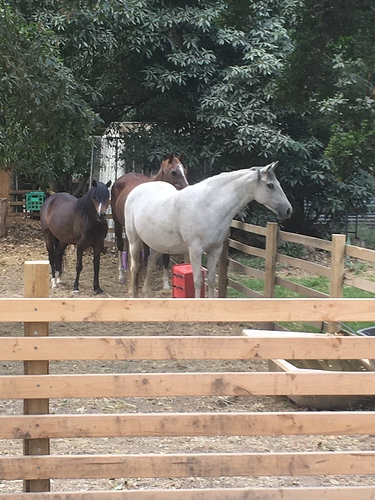 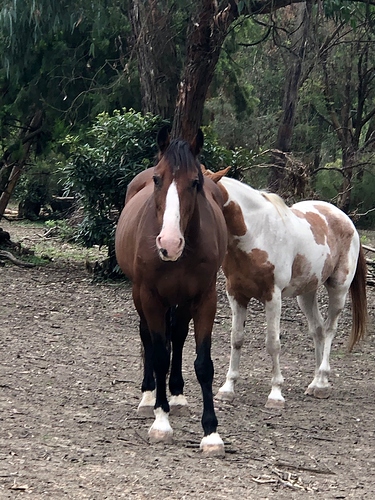 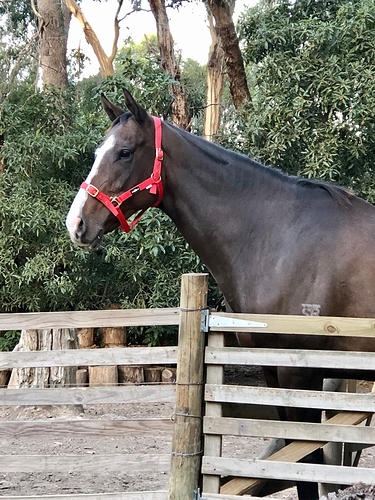 Great pet pictures everyone.
Here are our two nutty Border Terriers, Buster and Maisie.
Recent pics after a trip to the dog hairdresser: 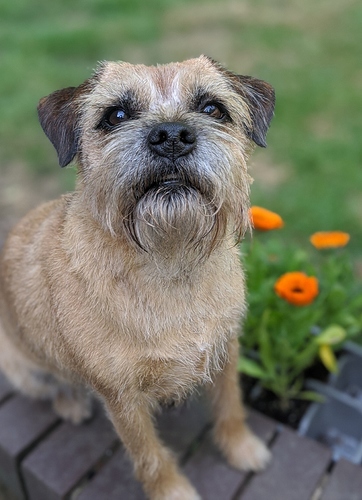 @Mark_UK
One of my very favourite breed of dogs

Thanks @mac.
The order of priority in our household is:
My wife
Bess (my wife’s horse

)
Come to think of it, it’s debatable whether I am actually above the snake in relative importance…

Love all the pets so far, except “you know who’s cat” (just kidding)

My daughters dog. Sirius Black (from Harry Potter)
He goes by Siri or Sirius, but I call him Buba
He is such a ham.
But he is one of the best dogs ever.
Only second to my first Rottweiler I had from 1993 to 2003. Her name was Mallory Knox. My TV watching Rott. Best dog that ever lived. IMHO.
Seriously watched TV. We babysat her with it. Turn the TV on, she would jump on the bed, and watch til we came home or she fell asleep.

People say dogs can’t watch TV cuz they can’t SEE TV. Maybe not, but she could.

One time on TV a guy was eating a hot dog. She got up and got close to the tv. As soon as his hand dropped down to the bottom corner of the TV with the hot dog in his hand, she tried to grab it from him. Of course her nose didn’t get thru the screen. I would say that is absolute proof she saw and watched TV.
After that happened, she shook her head a bit, from smacking her nose into the screen, then turned around and looked at us with a guilty and embarrassed expression.
I felt bad and opened a can of chicken Vienna sausages for her.
True story.

But no pictures of her, they are in storage somewhere, so here is photos of Sirius Black, puppy to current. 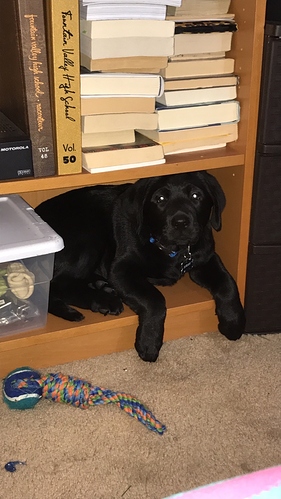 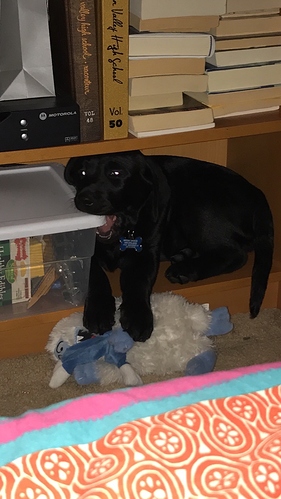 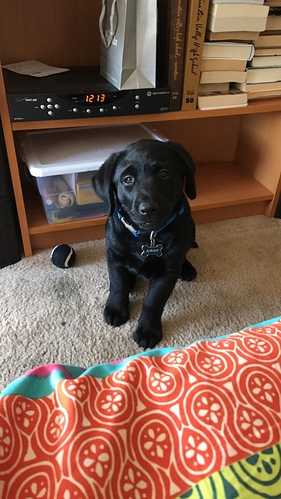 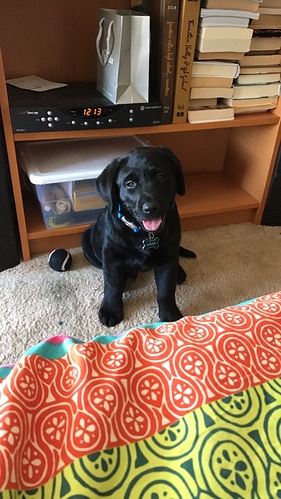 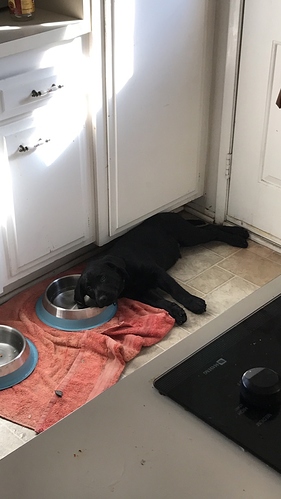 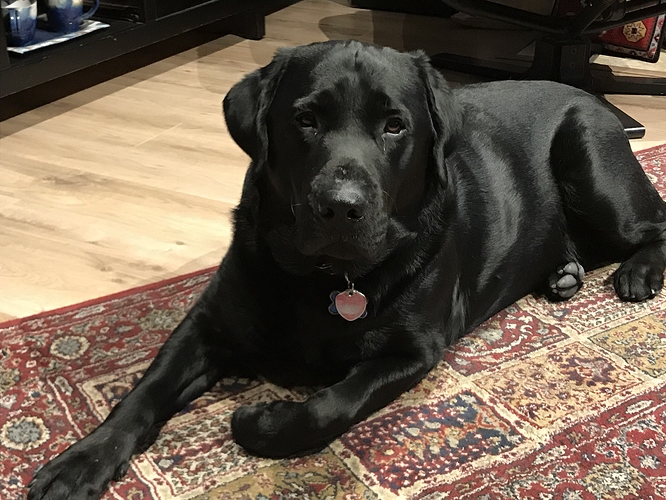 @T_dub
Love Labradors . Had a really good couple of working labs back in the day.

Love labradors. My wife and I had one that was given up by my parents as they couldn’t cope, before we got married.
At the time we lived in a property in a rural/forest area. I say property, it was a converted loft above some stables that came with my wife’s horse groom job (a flat that constantly smelled of horse poo!).
Our black Labrador used to run off every morning, causing us great anxiety, but always came back later in the day.
We eventually discovered that he went off every morning to have his wicked way with the female dog on the neighboring farm, then always came back for his food later on in the day.
Always admired that mutt

Yes, dog knows the value of the finer things in life. Food, a place to eat it and sleep, and the love of a good woman (I did not want to go the Bitch route here).

Here is our old boy,
He lasted 16 years 9 months 4 days
We had him cremated, and my wife has his box wrapped in his blanket and he sleeps between our pillows every night and she puts him on the couch every day when she gets up.
We drive up to our sons place every 2 weeks to see our grandson and he comes to.
It’s been 2 and a bit years now

No more pets, but I love to see yours​:grinning:

A couple of pics, one of his special birthdays and another on the couch
Cheers Brian 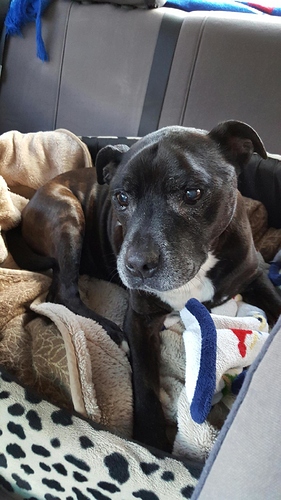 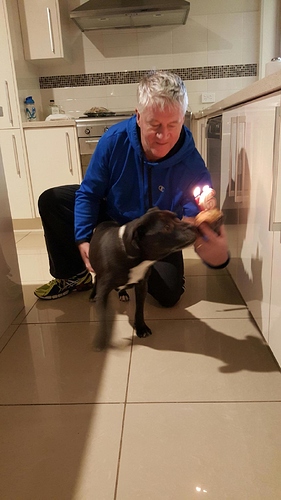